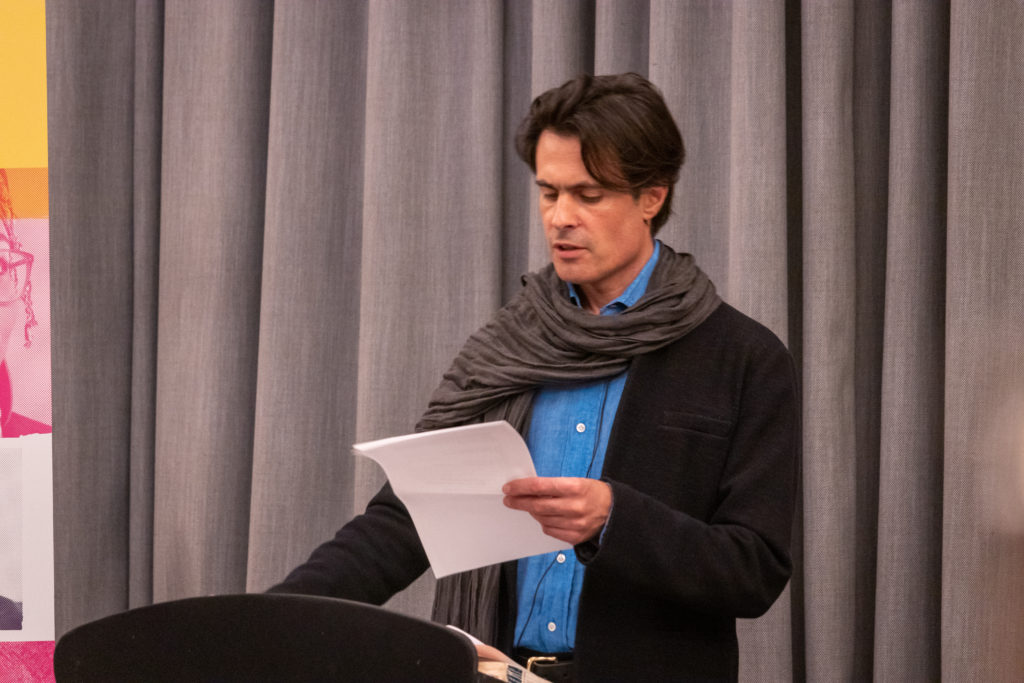 Creative writers gathered in the ornate ballroom of the Principal Hotel in Manchester to listen to poet and artist Sean Borodale narrate his personal relationship with renowned writer Sylvia Plath.

The event was introduced by Carol Ann Duffy and formed part of The People’s Poetry Lectures in partnership between the Manchester Writing School and the Manchester Literature Festival.

Borodale’s passion for Plath was seen through his fluid voice and tapping foot during his recitation. He told guests how he first came across Plath when he was a young beekeeper and poet. On the eve of the anniversary of Plath’s death on the 10th of Febuary, Borodale’s own first bees and their queen died. This became the inspiration to show homage Plath through his notable writings Bee Journal and Human Work.

“She wrote about bees and she kept bees as a child so it was a nice thing to read this for the first time in Manchester,” said Borodale.

The main message through Plath’s work was the power of words and the importance of the world around us. Borodale feels that Plath exceeds the energy level and she gives us this “star energy.”

Borodale said, “The words are clear but powerful. This shows the importance of failure of language and in this day and age, it’s important to see how poets try to unpick language and take language further and push the edge of discourse.”

He has taken Plath’s writings into his own work and something he admires is a writer’s ability to make things that are hard to say more possible to relate to. This is the reason why Borodale think Plath is so important and relevant to today.

“I think my work relates to hers in terms of social discourse and environment. I have done that through engagement with real things,” Borodale said.

“It’s usually quite a fundamental thing. Bees are so fundamental to everything based on pollination so for me it’s to look at things form an edge, from an angle. I think you just want to break a language boundary somehow.”

Among creative students and members of the public were Manchester Met’s own faculty. Jean Sprackland, Professor of Creative Writing who specialises in poetry, shared her reaction to the series. She said, “These People’s Poetry Lectures are an obvious place for me to come. Not just to hear lectures about poets, but to hear poets talking about poets.”

She added that hearing a contemporary poet like Borodale talk about a poet from that past that is important to him gives a personal take on what might matter about that poet’s work.

Sprackland added, “I find that really fascinating because we’re all influenced by poets we’ve read and articulating what that influence means and why that’s important to you is really an interest to us as poets.”

Manchester Met lecturer Karen Solie teaches English and Creative Writing. Karen found the event energizing and new to what she has previously experienced. She was impressed that Manchester Met was hosting this outside of university for the public too. She said “It’s a great idea. It’s a credit to the university, it’s in a beautiful venue and people get to come and listen to poets speak about poetry. It’s a wonderful event.”

Language was an important theme of the night. To Borodale, being a writer means to break down writing and understand metaphors. He said, “We are always testing metaphor and you can apply logic to that. If you look past poetry, it’s refracting meaning all the time.”

Plath left a significant imprint on Borodale which was more than a relationship through words. Borodale ended the night with a strong closing statement on the power of her work: “It’s a careful relationship because she very powerful. I think I’m more of an apprentice, I’m interested in how strong writers can calibrate. When I wrote my poems, Plath wasn’t in the centre. I wanted to look for myself.”