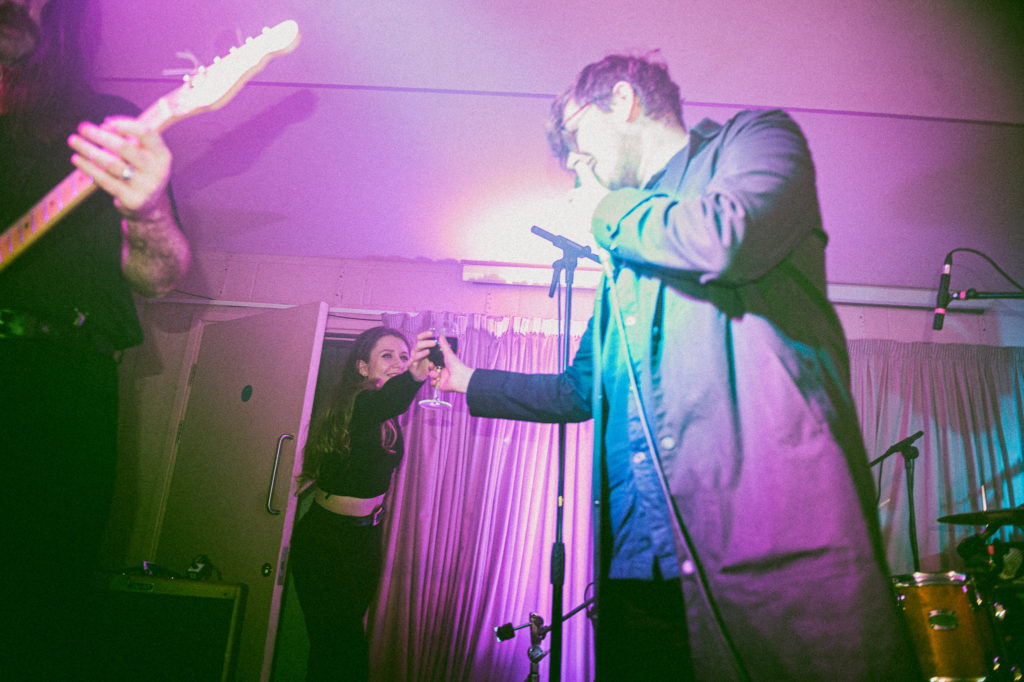 The bright Pink Room aesthetic and limited 250 capacity of YES might not be where you would expect to see a band on the cusp of their debut number one album. Yet the unbeatable sound of a cowbell being sound checked meant that this was indeed the venue for the country’s hottest new band, Post-Punk word-smiths Yard Act.

The release of their debut album The Overload has seen them thrust into a chart battle with Years & Years (Olly Alexander, Channel 4’s It’s A Sin). The band have made an instant impact on the modern rock scene with their fractured dance beats, deadpan euphoria, social commentary and vibrant, mosh-worthy energy combining to raise them straight to the top of the Indie game. As a last-ditch attempt to reject their anti-capitalist nature and pursue that holy grail that is a number one album, they performed an intimate last-minute Manchester gig to showcase the best of their new record to those quick-fingered enough to grab a ticket to the sell-out show.

Yard Act entered the stage, minus frontman James Smith, and jumped into a crashing Garage Rock instrumental. For a band whose sound revolves so heavily around the weaving lyrical content of their vocalist, it was good to see the band play briefly as a trio just to highlight their technical proficiency as musicians. Just as it started to feel that the instrumental may be dragging on too long, guitarist Sam Shipstone had to pop his head backstage while still playing to call their charismatic singer on stage. This slightly shambolic yet musically fantastical opening would come to encapsulate the subsequent show.

Four gigs in one day had left Smith perhaps a little too deep into the bottle of House Red, rendering him dreary eyed and philosophical with numerous ‘Oscar acceptance speech feeling’ monologues that interspersed the set. It merely added to the charming honesty of the band’s persona and didn’t hold him back from delivering his coiled social discourse down the mic with even more intent than on the record.

Highlights came in the form of the echoed angsty response in ‘The Incident’ and the short and snappy sing-a-long of ‘Witness (Can I Get A?)’. The latter is probably the most accessible from the new record and Smith stated that it was “the kind of album we would have written if we couldn’t be arsed“. However, the track that really ignited the crowd and got micro-mosh pits sparking up in bustling blotches was the funky, dance-inducing ‘Payday’. Smith voiced his surprise that it had been that song that really got people moving: but it’s no shock that such a groove-centric song with an easy to remember chorus line “Take the money and run” would go down well.

It wasn’t long before the stage manager had tapped her watch, the front man had managed to thank everyone under the sun and even managed to start chants of “Gandhi! Gandhi!” claiming that their record had been endorsed by the man himself. Bassist Ryan Needham added “that’s strange because Gandhi famously hated Post-Punk which is proof that we are not a Post-Punk band”. Unfortunately, it doesn’t matter how much this new wave of thriving up-and-coming bands attempt to avoid being boxed into the genre, I will continue to press the Post-Punk stamp on them as long as it has ink.

There was time for just one more song, the album’s title track ‘The Overload’. It radiated an infectious energy that allowed the aforementioned bite-sized moshpits to expand to grab-bag proportions. The center of the room waited in anticipation for the vocal cue “and that’s bleak” to dive into the pit for a chorus that combines all the best elements of their music. The instrumentals were cohesive, acting as one big wall of sound that was joyful in rhythm yet menacing in tone.

Smith did what he does best and commanded the room to repeat back his social commentary in punk poet fashion. Recency bias will make this claim that the song falls short of significance but after hearing ‘The Overload’ live, it was made for the current generation with its kind of ‘they’re fucking us over but let’s dance for the moment’ attitude and super catchy chorus.

For anyone new to Yard Act, this song is where I would start listening. It acts as a great entry point and provided the perfect close to a night, disproving anyone who thought the Leeds quartet don’t totally deserve to be battling the country’s biggest stars for that coveted number one.