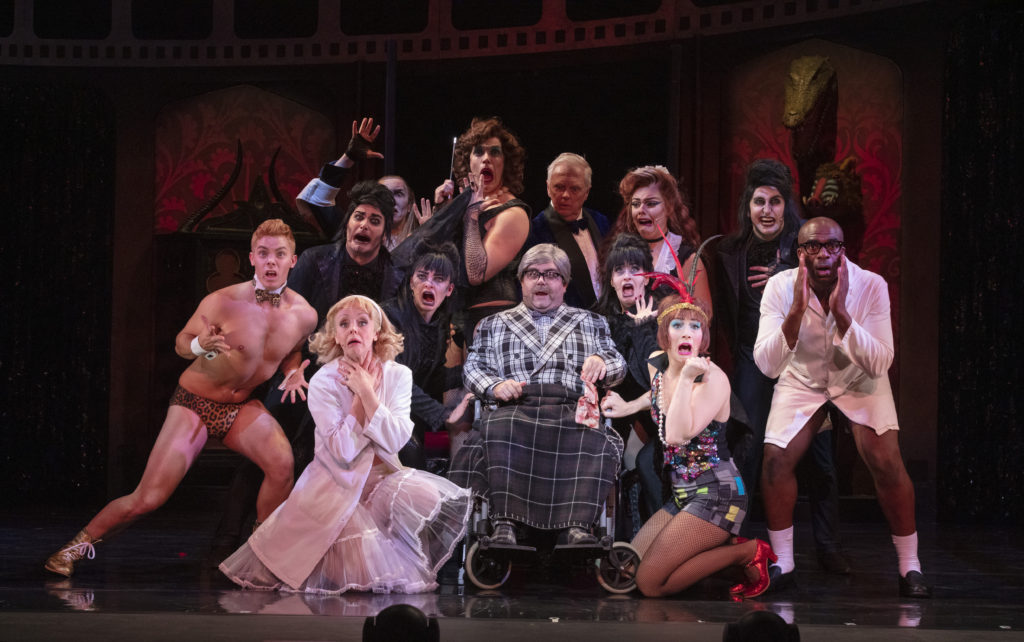 I love Rocky Horror! I need to state that before divulging into the review; let alone theatre, it’s one of my favourite things of all. As much as being impartial is crucial in writing, The Rocky Horror Show at the Palace Theatre had grand expectations; and it delivered… in abundance.

Stemming from the weird and wonderful mind of Richard O’Brien, this legendary rock’n’roll musical has been entertaining audiences since the 1970s. You may be familiar with the iconic film, but this current production is perfect for fans and strangers to the show, succeeding with sass, crass and a whole lot of astounding camp.

Brad Major – arsehole! (Strictly Come Dancing winner, Ore Oduba) and Janet Weiss – slut! (Haley Flaherty) perfectly ordinary lives take an extraordinary turn when their car breaks down and they look for assistance “over at the Frankenstein place”. After being greeted by Riff Raff, (Kristian Lavercombe) his… why am I trying to explain Rocky Horror? It’s a nonsensical, wild experience and I won’t do it justice. Anyways, after being greeted by Riff Raff, his sister Magenta (Suzie McAdam) and groupie Columbia (Lauren Ingram) they are invited to witness an ingenious feat of science. The “sweet transvestite from Transsexual, Transylvania” Dr Frank-N-Furter (Stephen Webb) creates the perfect man for their own pleasure, Rocky (Ben Westhead) and this spawns a massive orgy featuring but not limited to: sex, murder, cabaret, chainsaws, aliens, adultery, dancing, Phantoms and high heels. Rocky Horror is acclaimed for its fearless depiction of sexuality and freedom of expression; gathering a beloved cult following and inspiring audiences worldwide to “don’t dream it, be it.”

This scandalous musical can only work with a captivating Frank-N-Furter at the helm and Webb did the role so much justice. Adorned in corsets and fishnets, Webb commanded the stage every time they were on with this effervescent energy, performing all of the favourite songs with unbridled confidence. His vocals had the glam and his presence had the rock, Webb is a glittering standout in an already dazzling show. And of course, ‘Sweet Transvestite’ was everything it needed to be and more; mesmerizing, hypnotic and downright sexy.

The audience was hooked from the first guitar riff and was held captive until the last piano chord. The atmosphere in the Palace Theatre was unmatched to any other show, with people shouting out all the iconic ad-libs and responses, and doing the ‘Time Warp’ in the aisle. It was filled with die-hard fans of the musicals, creating this vivacious vibe where everyone was unapologetically having fun and smiling, no matter how much their face ached. I highly recommend to dress up, learn your lines and “give yourself over to absolute pleasure.”

Television and radio presenter Ore Oduba put on his ‘tighty whitey’ to play Brad – arsehole! in this production, capturing the dorky but adaptable character to high praise. It was clear he was having fun in the role which only furthered everyone else’s enjoyment; showcasing his Strictly winning moves. Oduba was a true joy to watch and gave a truly “Major” performance.

Unlike Oduba, Flaherty is no stranger to Rocky Horror and it showed, portraying Janet – slut! in the broadcasted recording for BBC America. She was sweet but alluring, absolutely nailing her ingénue-esque character. Her solo ‘Touch-a, Touch-a, Touch-a Touch Me’ was playful with the perfect amount of naughtiness, and demonstrated her powerful belting skills throughout the show. Dammit, Janet was played by a definite professional of the role.

Oduba, Flaherty and the rest of the amazing cast sang O’Brien’s music with great vibrancy. The songs in Rocky Horror are fun and memorable, perfect for a sing-a-long. The eleven o’clock number ‘Rose Tint My World’ was a personal favourite and brings the musical to its grand finale, set with feather boas and lingerie. It perfectly balances rock’n’roll with heart and emotion, where you will be dancing and laughing at one point, then having your soul crushed at others.

Alongside the music is the book, again written by O’Brien, which is like comedic clockwork. It’s witty, effective and full of personality. There’s a reason why people call it out from the audience. However, certain lines have been included to modernise the show, adding current references and satire that was refreshing and unexpected. I didn’t think Rocky Horror could shock me anymore, but it was very much mistaken.

These new humourous lines were mostly delivered by the Narrator (Philip Franks) whose audience interaction and overall engagement was magnificent. The Narrator is the tamest of all the characters so can fade into the background, but Franks was able to shine in the spotlight and keep the audience on their toes.

Rocky Horror is a fun but difficult show to execute so a massive accolade to all of the featured cast and the Phantoms in the ensemble. Everyone excelled in their roles, especially considering they were in sparkling costumes and high heels. Their performance in their pleasers was very pleasing.

Rocky Horror was flawless. The atmosphere and performances were perfect for the show; exactly what it needed to be and exactly what I needed to see. I can confidently say that it has been one of, if not my favourite, theatre shows I have ever experienced. Everyone in the audience loved it and was insanely grateful for the night, “I’m lucky; he’s lucky, we’re all lucky” to have seen it.

Please note that the musical does heavily features themes of sex and mature language.

The musical will be doing the ‘Time Warp’ from Monday 17th January to Saturday 22nd January, 2022 and does not disappoint. Waiting to see it will have you shiver with antici…

Tickets for Rocky Horror Show at the Palace Theatre Manchester are out now.