You are here: Home / News / Opinion / Opinion: Girls Night In six months on… Why is it still safer for us to stay in?! 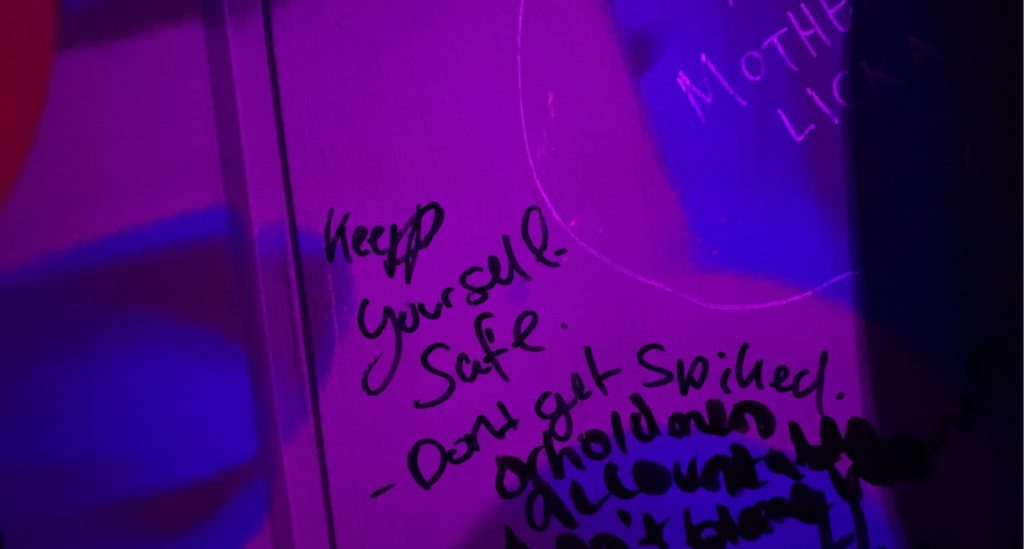 “Keep yourself safe – don’t get spiked.”

Up and down the country UK clubs are in crisis. While spiking has been around for as long as clubs have been going, the recent epidemic has seen victims hospitalised in worrying figures and with increasingly terrifying methods. As reports of drink spiking peaked between October 2021 to January 2022.

The majority of cases were women, and students who had faced spiking on their campus began to take to social media to raise awareness of the events. But when reported spiking via injection cases rose to nearly 1400 in the lead up to January 2022, it seemed that by spreading awareness, they had actually encouraged criminals to use such a method.

raising awareness about spiking is imperative and absolutely vital but it’s also encouraged a lot of sick people to start spiking by Injection by hearing about it, it’s suddenly massively worse. We can’t win.

So, what happened next? And is anything happening now?

Many Manchester clubs, including student favourite 42nd Street, decided that, for this one night, they would shut their doors in response to the epidemic. On 42’s Instagram page, they stated how seriously they believe that people should be able to enjoy a safe night out, and listed the precautions they have taken to ensure this. However, this support and safety concern was not shared by the police.

In January, the director of inspections and enforcement at the Security Industry Authority (SIA), Paul Fullwood, stated that they had received “no intelligence of spiking by needle”. SIA is responsible for the security of the UK’s nightlife sector, and their response wasn’t taken lightly.

University students took to social media, once again, to show the puncture holes, rashes and other marks on their bodies that demonstrated proof of injection.

A petition gained 140,000 signatures to make it a law for searches to be carried out before entry to a club was admitted. Despite the numbers of those in agreement, and growing numbers of spiking reports, the concern has slowly faded out.

The government encouraged girls to speak out, while police dismissed cases, causing girls to take further action: the Big Night In (formerly Girls Night In) was born. Across the UK, women agreed that for one night, they would stay in and continue the club boycott.

One thing didn’t sit right with me, though. Why should we stay in? Why should we have to miss out on making memories with our friends? Why can’t criminals be caught? Misogyny struck again. Women were made to believe that staying home was their only option for staying safe. Yet, it is not the presence of women that creates danger, it is the criminals harming them.

“Stay in then. Simple”. On an article about female students in Cardiff not feeling safe to go out due to the increase in spiking by injection, these men think women should stay in. They should look out for each other. They should not drink so much.
They should stop overreacting. pic.twitter.com/2QFzhlJNBC

Being told to ‘stay in’ should not be the solution to making women feel safe. Covering our drinks should not be the way to make women feel safe. Those who have spiked someone should have to face convictions to show that spiking is not okay. I am all for girls doing what they can to stay safe and raise awareness of the danger we face, but whatever we do just doesn’t seem enough.

It is April 2022 and there is very little media coverage to encourage making nighttime venues, or just everyday streets, safer for women. Following the original wave of coverage, the rise of safety kits for women increased. These kits included a rape alarm and defence sprays. Is a little paint on the face enough of a punishment for assaulting a woman? Does spraying someone in the face really leave enough time for a woman to run for help? Of course, it doesn’t!

It’s a shame that awareness of the movement is no longer being covered, as I know many, many girls who still fear a night out. A personal friend has not been into Manchester city centre since her friend was spiked via her drink; they have since only attended house parties. I have had other friends that have gone out being as fully covered as they can but still don’t feel protected by the bars and clubs they are in.

In light of what my friends feel, a recent announcement has provided us with some hope: A night at the O2 Ritz will be strictly ladies only, creating a safe space that we have wished for. I only hope that clubs and bars exercise this idea more regularly.

There needs to be more support, more awareness and more women being believed before we can feel safe. Spiking is just one of the dangers women face and are told to ‘stay in’ to avoid.

These other dangers include the number of women every year who are raped and sexually assaulted: five million girls are raped from turning sixteen in England and Wales, only one in one hundred rapists face conviction, and one in every five women have been raped or sexually assaulted.

The Big Night In was so pure in theory, as spiking was and is just one more way for women to be taken advantage of. But there haven’t been enough changes to keep us safe… yet.

What do you think? Have an opinion to share?

Have your say and write for aAh! Contact the team at aAh.Editor@gmail.com