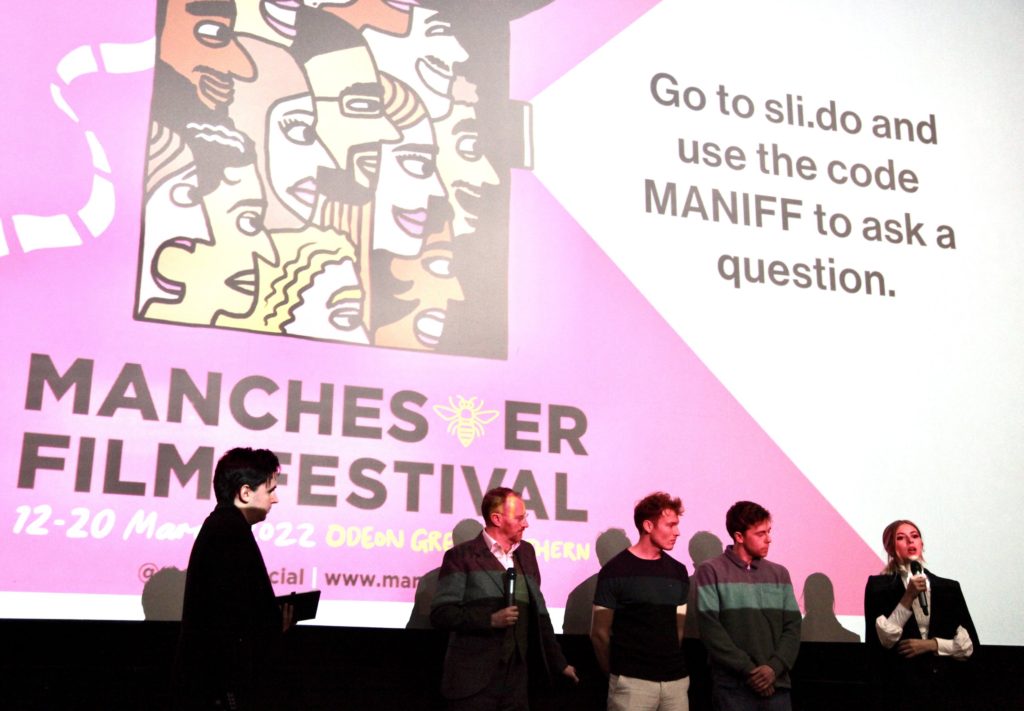 As with a majority of film festivals, the most unique and innovative work comes in small packages. Told through the format of short films, Manchester Film Festival 2022 has again showcased a wide range of genres and approaches from some of the nation’s best up-and-coming filmmaking talent, sketching their vision for the future of the big screen.

aAh! rounds up all of the highlights and favourites from the ‘North West Shorts’ category, a presentation of some great short films from across Manchester and the North West.

He Takes The Lead

Directed by Tomas Quezada Manchester, this 15-minute short will be an emotional kick to the stomach of most audiences, but especially those who have direct experience caring for elderly relatives. With sharp direction, quality cinematography and a subtle waltzing soundtrack, the production used everything in its arsenal to tie the audience into the emotional turmoil of the main protagonist, Pete (Olly Bassi).

From the very start we are exposed to Pete’s multiple conflicts; work stress, his struggling relationships with both his son and partner and most importantly, his duty of care towards his ailing mother whose memory is fading in her final years. It is with this duty of care that we are introduced to the narrative device that frames the rest of the film; his mother, played wonderfully by Rosalind Stockwell, keeps confusing Pete with his long-deceased father, whom he never knew. With this, as the title suggests, Pete takes the lead as her primary caregiver by assuming the role of his father to not only provide comfort and closure to his mother but also to gain insight into the life of his father who remains a mystery to him.

In this choice, in which Pete literally dresses up in his deceased father’s clothes, a sense of risk was felt in the audience through its sheer tonal oddity. Yet when lensed through the desperation of the situation, it is handled with such delicate care by Manchester that it feels perfectly realised and believable. At no point was it morbid for the sake of being morbid, as the shared vulnerability between Pete and his mother was gut-wrenching and incredibly humanising.

Pete’s own journey as he learns more about what it means to be a father and ultimately a son is touching and hits very close to home. If you want to hold back tears over the seeming mundanity of a man fixing a kitchen sink then definitely look out for He Takes The Lead.

Sombre yet reactive, The Dealer is a poignant response to the mental health struggles many experienced during our recent lockdowns. In doing so, directors Kenton Thomas and Jamie Swaby, engage our collective struggle by inverting the tropes of, as they put it, a stereotyped drug dealing Black male lead.

Here the recently single protagonist Anton, played by Co-Director Thomas, deals initially unspecified contraband to pay his rent but also to meet new people outside of the walls of his lonesome lockdown confinement. Yet as the film develops, any underlying audience preconceptions are thrown out as it is revealed that Anton deals in something much more holistic than drugs… words of affirmation. His own biggest customer, Anton’s words are sold and packaged into small concealable envelopes of verbal support that are shown as key to overcoming both his and his customers’ day-to-day struggles with life, isolation & loneliness.

Whilst the transactional nature of Anton’s affirmation dealing could be criticised for being an unrealistic concept, the self-reflective narration feels almost poetic and helps lift the film from the confines of more traditional narrative shorts. Once you accept the premise of an affirmation dealer, it stops being a one-dimensional twist and allows you to engage with the filmmakers’ social commentary and the expanded character development between Anton and his customers.

Far from trying to be overly profound or pretentious, Thomas and Swaby present a simple message; In hard, isolated times, it’s the uplifting support of human interaction that can make the most difference.

Utterly, utterly bizarre, and that’s no understatement. Directed by Varun Raman and Tom Hancock, this 4-minute rollercoaster is short but sweet in execution and easily has to be the most memorable of the short films, if not for the sheer conceptual and aesthetic uniqueness of its approach.

With the tagline ‘In the wilderness, a tree begins to question whether it may actually be a man tripping on hallucinogens. The entire plot has already been revealed, yet still, it would be impossible for anyone to predict what actually happens. Employing eclectic camera work, heavy editing, and a condensed 3/2 aspect ratio, the focus is always on the smeared forms of trees against the panicked yet emphatic voiceover of our lead, ‘Tree’ (Daniel Campbel) as he spirals into existential dread. The fact the directors, during their Q&A session, revealed this to be based on a true story experienced by a friend, further adds to the heightened sense of existentialism.

This short is borderline impossible to review in traditional terms yet so easy to recommend! Man or Tree is absurdist short film chocolate for post-modern fans or just those that want a surrealist laugh.

Far from being just a short film, Salt Water Town has above all else shrugged off its condensed run time and aimed for the production value and narrative scale of its feature film equivalents. The notable casting of known actors Tom Glynn-Carney and Owen Teale brought strong performances from the two leads which helped to achieve this feature film presentation and effectively portray the film’s key narrative themes of environmentalism and generational divide.

Family conflict propels the story as director Dan Thorburn and co-writer Jack Sherratt presents us with the disintegrating father-son relationship of Glenn and Liam set against the backdrop of an ageing caravan park in a welsh coastal town, that’s been declared worthless by insurers as its land is being slowly eroded by rising sea levels. With this, the filmmakers have carefully crafted a sense of ominous dread that permeates the 15-minute runtime, as the crumbling environment becomes more than the story setting, acting as a metaphor for the degrading relationship between a father who can’t let go of the past and a son who spends his days drinking, dirt biking and ultimately suffocating in a town going nowhere.

Whilst the story setting is niche, the script and performances are realised in such a way that is inherently relatable and allows the audience to project their own family experiences onto the story, as you begin to yourself feel torn between Glenn’s and Liam’s growing conflict.

Technically speaking, the editing and camera work deserves to be on the big cinema screen. With great intentionality towards composition and shot choice, D.o.P Max Graham has contributed visually impressive cinematography that, beyond just being aesthetically pleasing, really added to the characterisation of the two leads. Glenn (Teale) often being presented with smooth and static shots in juxtaposition to the more hectic handheld shots chosen for Liam (Glynn-Carney). Choices like this really heightened Salt Water Town from being just another short film and definitely added to visually characterising Glenn and Liam’s different motivations.

With this, it should be noted that rather than being a traditional short, Salt Water Town feels to me like the building blocks of a feature still to be made, as the fiery spectacle of the open-ended climax felt unresolved. Glenn and Liam. It is by no means a bad thing for the audience to be left wanting more as this is ultimately a project with ambitions far beyond its concise format. It’s encouraging therefore that Thorburn and Sherrat have received ​​BFI early feature development funding for their next project.

In giving a voice to domestic environmental issues as well as the transitional nature of many working-class communities across Wales and Britain, Salt Water Town is well worth a watch, not just for its production value but also for its relevance to many less discussed issues affecting contemporary Britain.