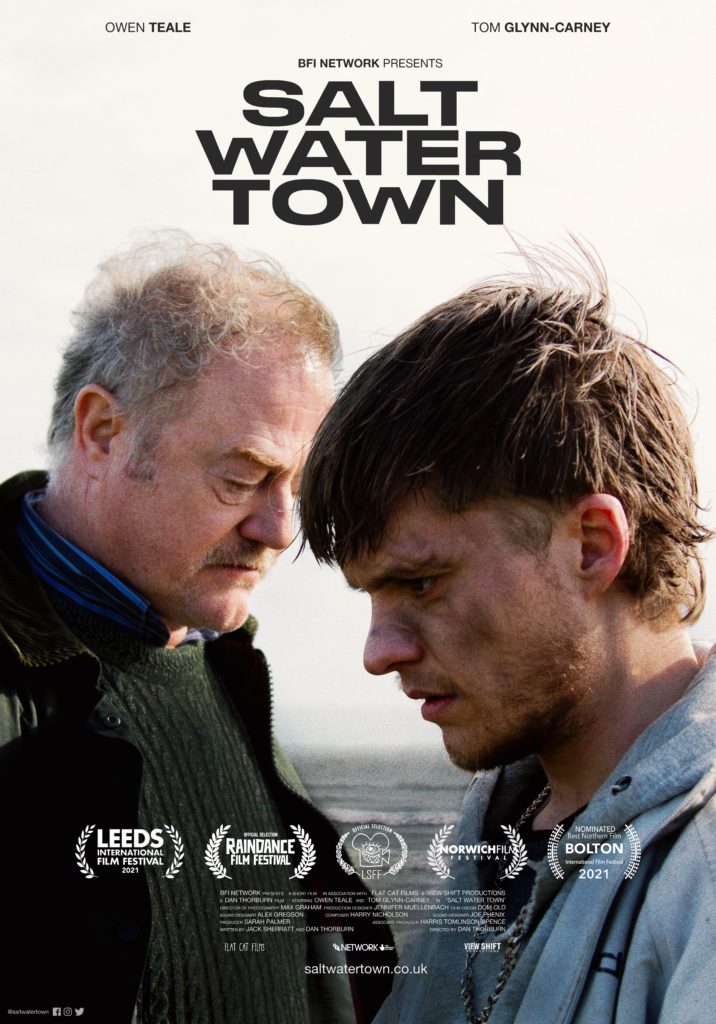 Salt Water Town is a 15-minute short film about the very real and ongoing destruction of coastal beaches, leaving resorts across parts of Wales to crumble along with the cliffside.

Starring Owen Teale and Tom Glynn-Carney, the film explores themes around toxic masculinity and looks at environmental decomposition. It is a thought-provoking and truly stunning visual piece of work.

The short film has been shown across various venues in the UK including; Leeds film festival, Raindance and London short film festival, to high acclaim. This isn’t the first short film that director, Dan Thorburn, has been recognised for since graduating from Manchester School of Arts back in 2018, but is surely one of his best pieces of work to date.

How does it feel to have your film reaching so many people to such high praise via various film festivals?

“It feels great. It feels good to get the work done and to be able to push it out to people. The reason people do this, the reason I do this, is to get those stories that might otherwise not be seen out to a wider audience. It came as a bit of a surprise really, we knew we were doing something along the right tracks but it’s always hard at festivals, you never know how the films going to be received but it’s a testament to everyone’s hard work that we’ve done so well so far, and we still have so many festivals to come.”

Tell us about the themes you explore throughout Salt Water Town?

“Jack Sherratt (co-writer) and I both wanted to explore the environmental themes, but we wanted to have them sitting in the background and loom there as an undertone. For example, the ocean itself slowly comes in rather than shoving aspects down the audience’s throats.”

“Wales is a place Jack and I spent huge amounts of time throughout our childhoods, but in that gap between being a kid and an adult you start to forget, and the magic starts to wear off. We thought it would be interesting to go back and to get a feel for these places that have been forgotten over the years. I remember driving through thinking, ‘Imagine being a young kid growing up here wanting to do something, be creative.’ How would you do that without pushing and kind of escaping these kinds of places?”

How has your background as an art student influences your work as a director?

“For sure, I transitioned my practice from art to film because I’m a visual person and I’m very keen on telling stories. I didn’t quite feel art was a great medium for me to tell my stories as in-depth as I wanted to, and I ended up finding, by chance, my way into filmmaking. I work with an amazing director of photography, Max Graeme, and we work really close together just because of how visual I am. I do go back and watch a script in my head frame by frame as I want to see it. For sure my interest in photography and background in art and fine art definitely does help.”

Salt Water Town focuses on a difficult relationship between father and son, around how toxic masculinity can control people’s decision-making; what were your intentions when bringing this to light on screen?
When we made truckers, we went and showed in Norwich Film Festival, during an amazing block of films, and as we walked out someone stopped me, this lass, shook my hand and said: ‘That was my dad that you just put on screen. If only he could have seen that, or if someone could have told him that then maybe he’d still be here.’ That kind of rounded it up for me, it’s easy to say “We need to talk more,” but it’s really hard, for blokes especially, to open up. There’s such pressure for us to be strong and powerful, older guys in particular. For me, this is just making people aware it’s common, it’s out there. We just need to recognise the signs and work together to help those fighting with the emotions of it.”

How did you get actors Tom Glynn-Carney and Owen Teale to portray such a comfortable and naturalistic father/son duo?

“I was very lucky in that both Tom and Owen are bloody fantastic. Really great actors that just know what they are doing. A lot of what we did was during the prep stages, during the pandemic, and we didn’t get much time to rehearse before we arrived on location. There was a lot of talk via Zoom and meetings about the characters around who they are and why they are like what they are. Owen especially wanted to go deep into the characteristics, like ‘What does he wear? Why does he wear this? Where is his wife?’ All that prep certainly helped because when it came down to filming, we all knew our standing and what direction we were taking it. The way I like to work too, is I don’t like rehearsing. I don’t like blocking, I like to just let the actors feel their way around their performance and it’s the job of the camera crew to film around that. That’s why a great deal of what we do is handheld shots. Not only to convey the sporadic emotions of the scene but it really does allow the actors to move in ways that feel comfortable and real. […] Something I’m adamant about is that the atmosphere on the set stays the same as the atmosphere of the text. I create an almost bubble-like area to hold in the emotions during the scene.”

What is next for Salt Water Town and for yourself?

“We are waiting to hear back from various film festivals, more European and western stuff. We already hit a lot of the British ones this year, but it would be nice to perhaps have a second run with small local venues that have followed and supported us for years. And also, I and Jack are in the process of writing a feature film for Salt Water Town with the BFI (British Film Institute) where we plan to explore some different themes using this short as a nice stepping stone into something even bigger. I’m also in production for a new short at the minute in London called The Painter and The Poet.”

Salt Water Town will be screening next at the London Short Film festival on the 18th of January 2022.