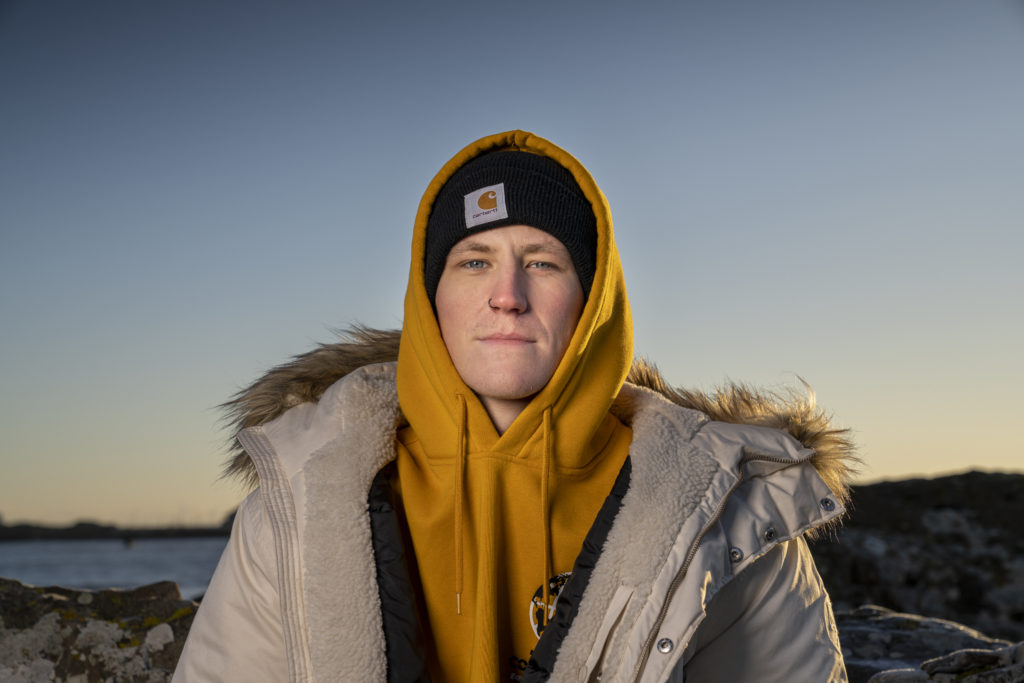 Gifted Fender guitars, performing with Jack Whitehall at the Brits and ten number 1’s in Germany alone, Nathan Evans, the self-professed “Scottish Billie Eilish”, has had a whirlwind of a year.

Exchanging delivery duties for uplifting viral anthems, the ex-postman certainly became the success story of the year, which all began by uploading his version of the sea shanty ‘Wellerman’ to TikTok.

The short-form video app has long aspired to showcase new artists in the music industry to a diverse audience. It’s a trend which TikTok themselves are aware of. They reported 75% of TikTok users say they discover new artists through TikTok and 63% of users heard new music that they’ve never heard before on the app.

Due to Evans’ flourishing video, he ended up signing a record deal with Universal and doing a TikTok ‘duet’ with Brian May of Queen, Ronan Keating, and Gary Barlow. On the back of his viral version of the sea shanty, he also released a remix with 220 Kid and Billen Ted, which has been streamed over 250 million times on Spotify alone.

You may have seen Evans on your TV, the award-winner in his own right, has performed at shows across Europe and has a closing performance on ‘Ant & Dec’s Saturday Night Takeaway’ under his belt. Plus, he released The Book of Sea Shanties in October, adding the title of author to his already glittering resume.

Capitalising on his success, the Airdrie-native has gone from making songs in his bedroom to creating hits in the studio. A catchy rewrite of the Scottish folk song, ‘Ring Ding (A Scotman’s Story)’ was released with an accompanying video of Evans globetrotting at his leisure. His track ‘Told You So’, saw the enigmatic frontman reflecting on his widespread success.

The protostar is yet to rest on his laurels, recently releasing a Christmas EP, Merry Christmas Everyone, featuring his versions of ‘Driving Home For Christmas’, and ‘Auld Lang Syne’. It’s a natural release as sea shanties were used to increase morale, so inciting festive cheer seems fitting for Evans. Testing out some of his new material on the road for his forthcoming debut album, it’s set to be one of the most exciting releases of 2022.

aAh! caught up with Nathan Evans to find out more about his upcoming projects, his favourite purchase from this year, and his tradition for celebrating success.

As a moment of reflection, it’s been almost a year since you uploaded ‘Wellerman’ to TikTok. What has been your favourite moment so far?

“It’s been a year of many favourite moments. Going number one was huge, going platinum was even bigger. All these things are good. I played at a festival in Switzerland. It was in a stadium and it was for 40,000 people. That was one of the biggest moments of the year for me, just the fact that there were so many people within a foreign country on a big massive stage.”

Definitely, because you’ve got your tour right around the corner, so I guess that’s giving you a taste of what’s to come?

“That’s exactly it. It gives me a taste of what’s to come in the future.”

Have you got a favourite song that you’re looking forward to playing on tour?

“I’ve got a few because all the songs that I played are already out as singles or original songs that no one has heard before, and I’m excited for people to hear.”

Which date are you most excited about?

In a podcast with Saint Phnx, you revealed that you found out beforehand that you got number 1 and were sent a dummy one in case it changed as you were against Rita Ora. Is there anything about the industry that has surprised you?

Just the fact that you’re a lot busier than you think you’re going to be. There’s a lot more going on behind the scenes than you expect. My dad’s always going to me saying, ‘What are you up to today, are you busy?’ I’m like, ‘Dad, I’m always busy!’ I’ve always got something on for that day, whether that be rehearsing for a show or I’m uploading to social media, or I’ve got interviews for that day, Zoom calls, or meetings. There’s always something going on. You’re a lot busier than you expect to be.”

TikTok launched your career but how do you find managing social media and combating any possible pressures of always keeping on?

“I think because I kind of started there on Instagram and TikTok, I don’t see it as a problem. But it definitely takes a lot of time and effort. I guess if I didn’t start there, I [could] see it as a struggle. You could maybe fall away from it. I just see it as part and parcel. Everyone’s on their phone and everyone’s on social media. Everyone’s doing it, so it’s just part of everyday life now.”

There have been TikTok duets with the likes of Brian May. Can we expect any collaborations on your debut album?

“At the minute, there isn’t anything set in stone but anything can change, so wait and see.”

I’ve spotted a picture with Lewis Capaldi on your Instagram, does this mean there’s a potential future collaboration coming?

“Possibly. You never know. I would love to work with Lewis Capaldi.”

You performed at the Brits with Jack Whitehall. How did this happen?

“They just got in touch with me and asked if I wanted to perform and I jumped at the chance. Of course, you would. They sent over the idea of what was going to happen and I was up for it. It was just as easy as that.”

You won the Best Breakthrough Act at the Brit Awards 2021 and saw everyone in the backstage room, who is your favourite person that you’ve met so far?

“My favourite person I’ve met so far would probably be Lewis Capaldi. Just because he’s Scottish, not far up the road from me. He’s pretty much the same as me, down to earth, and talks about the same stuff.”

Have you got the name and tracklist for your debut album and can you tell us more about it?

“No, I don’t have a tracklist or anything like that. But I know it’s going to be a variety. There’s going to be some piano ballads in there probably and some acoustic guitar songs. A wide variety of different stuff but hopefully, it’s going to be good and tick the boxes for everybody.”

You’ve released music videos for ‘Told You So’ and ‘Ring Ding’. Do you have any favourite stories from behind-the-scenes on set?

“I like the one for the ‘I Told You So’ remix video. The video I’ve done for that, where there was a few different backgrounds, that’s not a green screen. I was actually strapped to the back of a truck for it. That’s a fun story. I’m strapped onto the back of a pick-up truck getting videoed while driving about London. Driving about running tracks. That’s not a green screen, it’s all real.”

In ‘Ring Ding’ there’s the lyrics – “Well don’t act bigger than you are without a credit card”. What’s been your favourite or biggest purchase this year?

“Probably my house for me and my wife. When everything blew up and went crazy and all that, we were able to buy a house. That’s definitely the biggest purchase.”

I’ve already seen you’re a fan of Irn Bru in the studio, do you have any tour rider essentials?

“Yes. I have one but it’s probably the worst essential ever but it’s cans of Monster. I can’t stop drinking energy juice. It’s terrible as I know the stuff is horrendous for me. But that’s the one thing I always ask for and if not I’ll bring my own.”

You’re releasing the Christmas tracks, ‘Merry Christmas Everyone’ and ‘Driving Home for Christmas’, why did you choose those to cover in particular?

Do you have any particular Christmas traditions at home?

“No, not really. My only tradition is that I don’t have turkey for Christmas. I know that’s a backward tradition. I just don’t like turkey. I don’t have any traditions per se.”

What would you like to receive for Christmas this year or you’re hoping to find under the tree?

“This year has just been that incredible. I don’t actually want anything this year. I just want to spend it with my family, friends and my wife. So, if they’re all wrapped up under the tree, that would be perfect.”

It’s been a very crazy year but what are you hoping for 2022 to bring?

In the podcast, you also mentioned that you celebrated with a hoagie wrap and a £6 bottle of champagne. Would you celebrate differently next time?

“I might just make that the theme. It’s quite Scottish and pretty standard for me. I might just keep that tradition for whenever anything big happens. I need to get a hoagie wrap and a cheap bottle of champagne.”

You’ve released a book on sea shanties in October. Which is your favourite sea shanty and what is the meaning behind it?

“Come on, it’s got to be ‘Wellerman’. If I said any other one, I’d be lying. It’s all about the shipping company ‘Weller & Co’. They used to be a set of Weller brothers and they used to come around with provisions to other ships and give them what was needed. So, if they needed milk, bread, sugar, tea, rum, whatever it was, they would bring provisions for them. That’s pretty much what the song is about. ‘Soon may the Wellerman come to bring us sugar and tea and rum’. That’s obviously my favourite because it has such a big backstory and is a big part of my life.”

Do you ever think about what would’ve happened, if you hadn’t uploaded the video?

Is there anything which you’ve never been asked but wished that you had?

“Just thank you to everybody for your continued support. I look forward to seeing some of them, if not all of them on tour. I’m excited for what next year holds.”

Nathan Evans’ Christmas EP, Merry Christmas Everyone is available to stream on Spotify.