You are here: Home / Culture / Music / News / You Me At Six @ Stylus review – thunderous tunes and boisterous havoc 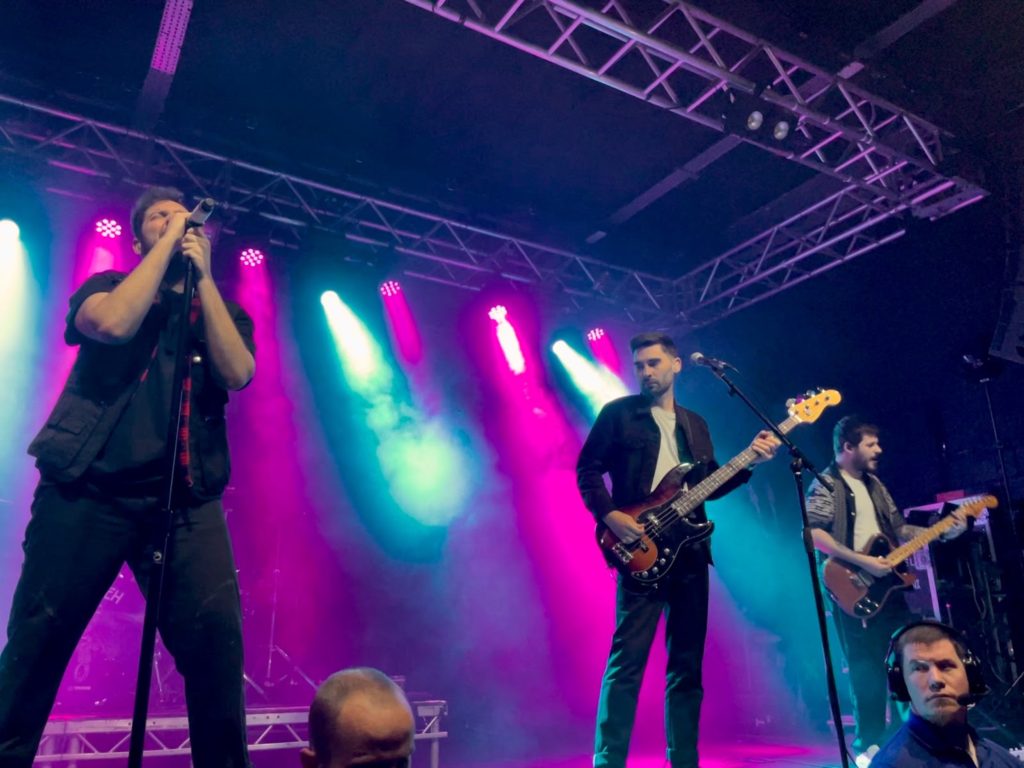 With bright blue lights, mystifying smoke, and a bold backdrop simply reading ‘You Me At Six’ in crisp white lettering, it was clear the band certainly had real big plans for the University of Leeds’ venue, Stylus.

The lively foursome stormed their way through their powerhouse third album, ‘Hold Me Down’ for its 10th anniversary whilst celebrating the launch of their latest edition ‘Suckapunch.’ It was a sweet two for one deal that saw eager fans, both old and new, gather in the stalls and stairs to watch these rock veterans tear up the Students’ Union stage.

Opening with the high-powered guitar riff anthem ‘The Consequence’, there were not a single pair of boots left on the ground. Arms were raised and heads were flying back and forth to the medley fading sirens, dynamic vocals, and snappy drum fills. The absence of Sean Smith’s vocals, singer of the now-retired Welsh post-hardcore band The Blackout, was missed but did not disappoint as fans gladly took over the screaming duties.

Launching into their second song, the album’s debut single ‘Underdog’, the momentum accelerated with ferocious singing and cheering from the crowd. After the bridge before the final chorus, the musicians halted the tunes and let the audience bellow the last few words; the band’s delighted smiles reflected how special this night was truly going to be.

“When in Leeds, you fucking turn up and you make sure that people know,” frontman Josh Franceschi declared which is met with the customary chant of “Yorkshire!” from the rowdy fans. With guitarist, Max Helyer, gleefully raising his pint and starting another chant of a rapid repetition of “Leeds, Leeds, Leeds!”, he may well have earned his title of being an honorary Yorkshireman.

Outside was wet, icy and bitter but, inside Stylus there was a sweet, warming embrace of the classic album. The crowd did not falter as the four-piece continued with the album’s second single, ‘Liquid Confidence’ where amusingly Franceschi forgot some of the words and looked to the ceiling for the music Gods to help him.

Franceschi gave a charming speech about the power of the You Me At Six fandom further showing the group’s dedication and appreciation to their fans. He spoke about being grateful for being a part of such a welcoming and “realist” group of people where all worries are left at the door and for everyone to simply party the night away.

Drawing the album to a close was an emotional performance of ‘Fireworks’, the combination of striking vocals, delicate guitars, grounding drumming, and hearty bass was an incredibly stunning conclusion to the ‘Hold Me Down’ celebration. This finale truly reiterated the importance of live music and how much it has been missed throughout the pandemic.

In the end, the band were met with what seemed like an infinite round of cheers and applause. At that moment, as cliche as it sounds, it seemed like time stood still as there was an overwhelming sense of unity spreading across the venue. People were screaming, clapping and some even crying after such a spirited and powerful performance, allowing everyone to momentarily forget the state of the world and fully embody the power of music.

The band left the stage but not for long as the desperate cries of “One more song!” allured them back to the stage to perform an assortment of bangers including the fiery new anthem ‘Beautiful Way’ and, immortal classics like ‘Lived a Lie’ and ‘Reckless’.

After 15 years and 7 albums, the Surrey-born quartet has truly cracked the secret to giving an immense show – a crowd of loyal fans, a booming variety of both classics and new music, plus an abundance of energetic stage presence!

Leeds Music review you me at six