You are here: Home / Art / Culture / Features / News / Van Gogh Alive: The Experience @ Media City review – Is it the triumph that it appears to be? 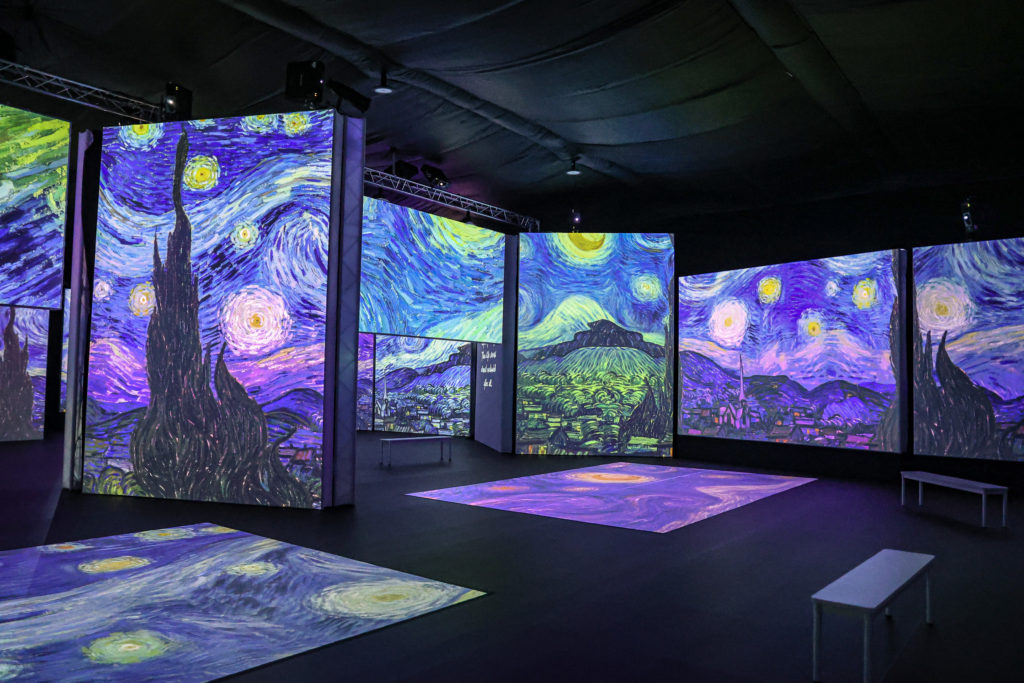 Van Gogh Alive: The Experience, the “most visited multi-sensory experience in the world”, is crossing continents and stirring up a social media storm as it goes. It claims to transform the way in which people engage with art and redefine the concept of an exhibition, creating an entertaining and educational experience that simultaneously stimulates the senses and expands the mind. But is it really benefitting the art world as much as this would suggest?

The technology that makes this exhibition unique is SENSORY4™, a system developed by Grande Exhibitions combining high-definition projectors, multichannel motion graphics, and cinema-quality surround sound. Covering 40 projector screens of various shapes and dimensions that line the walls, the floor, and even form archways through which spectators can walk, the immersive display runs for approximately 45 minutes.

The moving imagery of Vincent van Gogh’s artworks enables the spectator to accompany the artist on a journey through his life, gaining an understanding of how his work evolved as he moved locations and experienced changes in his mental state. Quotes taken from Van Gogh’s written letters appear on select screens in tandem with the changing imagery that fills the rest of the space, aiming to demonstrate his artistic intentions and desires in each phase of his life and his personal feelings towards his own creations.

The display begins with Van Gogh’s earliest paintings from the period 1880-1885. Painted in the Netherlands, these works showcase the stylistically dark Dutch approach to painting, where the darkest tones are applied to the canvas first and highlights are built upwards. At this stage in his career, when he was essentially teaching himself to paint, Van Gogh was concerned with the bleakness of working-class life in juxtaposition with his own middle-class upbringing. Artworks such as Head of a Woman (1885) and The Potato Eaters (1885) capture the reality of life as a toiling peasant.

Van Gogh’s move to Paris in 1886 sees the exhibition space suddenly bursting with colour, and the artist’s proclamation, ‘The painter of the future will be a colourist in a way no one has been before’, announces his new artistic phase. He stayed in the French capital for two years, during which he discovered many Impressionist and Post-Impressionist influences and developed his signature style that features vibrant hues and expressive brushstrokes to convey emotions. The gallery-goers see the introduction of nature to his work, with pieces including Two Cut Sunflowers (1887) and Fritillaries in a Copper Vase (1887), as well as the influence of Japanese art, most evident in Flowering Plum Tree (1887).

In 1887, Van Gogh moved south to Arles, where he painted his iconic Sunflowers (1888), accompanied in the exhibition by his wistful statement: ‘The sunflower is mine, in a way.’ In this new location, the artist was inspired by the local landscapes and people, painting scenes such as Café Terrace at Night (1888). At this point in the exhibition, Van Gogh’s descent into mental illness starts to become evident, notably in his Vincent’s Bedroom in Arles (1888) where the use of symbolism and distorted perspective reveal his emotional state.

With Van Gogh’s admittance to the Saint-Paul-de-Mausole asylum in Saint-Rémy, where he lived between 1889 and 1890, his mental suffering is conveyed through artworks such as Wheat Field with Cypresses (1889) and Starry Night (1889). In these paintings, the swirling patterns and heavy brushstrokes evoke the artist’s experience wavering between disturbing hallucinations and dream-like states. The exhibition space is infused with a sense of tension, enhanced by the artist’s reference to himself as a ‘suffering creature’.

This tension continues into the final phase of the exhibition, where works including Thatched Cottages at Cordeville (1890) show Van Gogh, while living under the care of Dr Paul Gachet, relentlessly painting his final surroundings in Auvers-sur-Oise. The immersive experience reaches a climax with the final piece, Wheat Field with Crows (1890), which depicts the location where the artist, in the height of his anguish, shot himself.

The experience is accompanied by a carefully crafted classical score, including Antonio Vivaldi’s Le quattro Stagioni, Tormenta, J.S Bach’s Cello Suite No.1, Léo Delibes’ Duo des fleurs (Lakmé), and Camille Saint-Saëns’ Danse Macabre. This element of the exhibition is undoubtedly genius, as the surround sound truly engulfs the viewer, submerging them in the feeling of the imagery. The music controls your emotional experience, transforming in tempo and key, and reaching crescendos at the most critical points of Van Gogh’s life and career. The artist himself referenced a ‘pure harmony and music inside me’, and thus the score enables the audience to tune into Van Gogh’s mind at the time of painting.

The animation aspect of the exhibition is more questionable. It is most successful when a train moves through one of the paintings, signalling Van Gogh’s move south from Paris and symbolically taking the viewer with him; and when the final painting pairs the sound of a gunshot with the chaotic movement of flying crows, representing the moment of the artist’s self-inflicted death. These elements of movement contextualise the paintings as well as engage the audience. Throughout the rest of the experience, however, elements such as petals falling from a tree and paintings flashing onto the screens in time to the music do not contribute anything to the artwork. In fact, the attempt to incorporate literal movement through digital means largely overlooks Van Gogh’s work in creating visual movement through his varied brushstrokes and swirling patterns.

The exhibition is minimalistic with the amount of information provided, and this is both a pro and a con. Outside of the main exhibition space, where the images, music and movement are the sole content, there is only a short series of information boards covering biographical details about the artist and presenting a few key artworks. This limited information means that the exhibition does not contribute anything new in terms of art historical scholarship, and for people who have a particular interest in art or Van Gogh himself, there is nothing new to learn. In particular, information about the work of French Impressionists who both knew and inspired Van Gogh would give the artwork on display context and highlight the important unique qualities of Van Gogh’s work. Yet, for people who know little about art, the exhibition makes the topic of Van Gogh accessible, and the focus on aiding engagement through music and movement opens art to the masses.

The greatest downfall of the exhibition is that the use of digital technology has arguably made it more about media than art. It is likely that you have seen photos or videos of the exhibition shared by friends on social media – it seems that very few people visit and leave without a camera roll full of content. This shows that there is a literal barrier between the audience and the art. Visitors are thinking about which part of the experience will make the best Instagram story instead of considering the art and its meanings. While the coverage on social media helps to spread the word about the exhibition and increase attendance, it attracts people for the potential to take good photos. In this sense, the experience can be considered to be putting the art world at risk by detracting attention from the art itself.

Perhaps the most insightful of the artist’s quotes featured in the exhibition is: ‘I want to touch people with my art. I want them to say, “he feels deeply, he feels tenderly”’. Considering this statement, the immersive experience does Vincent van Gogh justice through the use of music and the artist’s written word, as these are the most emotionally engaging elements. Meanwhile, the use of motion graphics betrays the artist’s intentions. Rather, it reveals one thing: when incorporating digital technology into exhibitions, there is a thin line to tread between elevating and damaging the art.

Helena Heaton graduated from Trinity College, Cambridge with a degree in History of Art. Currently, she is completing an MA in Publishing at MMU. Her interests are art, theatre, and books.