You are here: Home / Culture / Music / News / Review / Happy Mondays & James review @ AO Arena – a ticket to this hometown show was a privilege 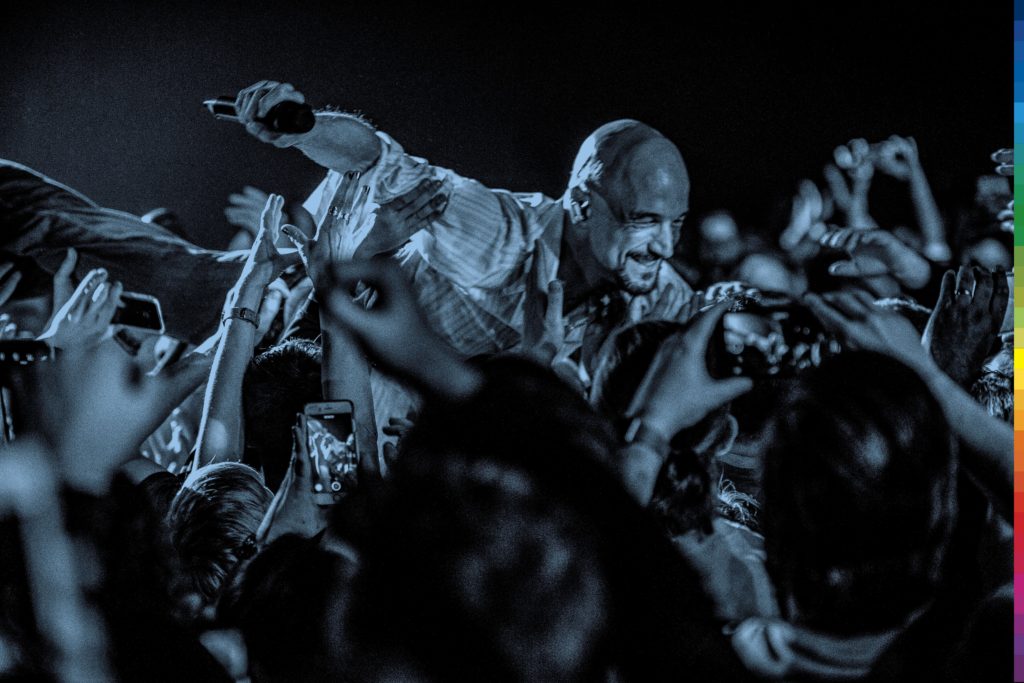 The AO Arena proclaims they have been a stage to over 25 years of hometown heroes, and with the night dedicated to two of the city’s most iconic bands, Happy Mondays and James, it’s a statement that has never rung more true. Both groups rose to prominence in the ’90s, and after looking around the crowds, it’s clear that their fan bases have grown with them.

As expected the audience is primarily male-oriented, which was only realised after seeing that the only massive queue for the men’s bathroom. Despite being in the minority for both age and gender, each band’s sound transcends any pigeonholing.

A ticket to this hometown show was a privilege because until Marty McFly arrives with his DeLorean, this was one of the only opportunities to observe and enjoy arguably the peak of Manchester’s music scene before tracks such as ‘Laid’ became a mainstay at 42’s.

The rumbling of the instrumentals and crowd welcomed Happy Mondays to the stage, alongside flashing of yellow and blue lightning and the opening of a sci-fi film – fitting for our travel through time. Their opening track ‘Kinky Afro’ featured a thumping beat and glittering guitars, as well as, their vocalist Rowetta’s wonderful booming voice. Twirling her leather tassels, it has been well-known for decades that she’s a born performer.

Keeping to his infamous role, Bez was seen dancing with maracas, acting as their introduction to ‘God’s Cop’. He was front and centre, proving why we need to vote for him on Dancing on Ice next year with his rhythmic prowess, and got everyone in the audience cheering. Lead vocalist Shaun Ryder jokes “the guest list is mostly Bez’s mates”, and while that may be true, the arena didn’t convey the lack of intimacy which you’d think a 21,000 capacity venue would. This notion of greeting old friends transferred to James’ set too. Their track ‘Denis and Lois’ prove that their sound defies both time and age, especially with this upbeat hit.

90s smooth indie-dance tracks ‘Loose Fit’ and ‘Bob’s Yer Uncle’ were the highlights and it’s clear the crowd thought so too. Following these, with ‘24 Hour Party People’, Ryder announced: “This is getting on for 38 years old? It doesn’t matter if you still feel 21.” The average age of the audience may have been higher but the atmosphere certainly spoke otherwise.

Before their next track ‘Hallelujah’, Bez began dancing with his maracas on the front speaker with Ryder responding: “You’re nearly 60 get back down!” Rising in the ‘Madchester’ era, it’s clear this band’s penchant for a wild time still exists.

As soon as Ryder uttered the words “You’re twistin’ my melon man”, we knew ‘Step On’ was coming. Bez and Rowetta were dancing together and everyone in the venue was chanting and cheering for “One more tune”, with the help of Bez himself. The band naturally obliged with ‘Wrote for Luck’ and the psychedelic symphony was the perfect finish to their set It had already been the gig of a lifetime, and with James set to take to the stage, perhaps it will be the gig of the century.

While the arena was a hive of anticipation for the long-awaited return of James to their original home, Manchester. “James is not a person” as the rainbow Facebook handle advertised, but more like a machine and every cog in their live setup is deserving of praise. Around nine musicians strong with the new additions of multi-instrumentalists Debbie Knox-Hewson and Chloe Alper, there was definitely strength in numbers.

Their opening track was ‘Zero’, from their recently released 16th studio album, All The Colours Of You. and it may seem strange to begin with the lyrics, “We’re all gonna die.” The song has strength in its honesty and how we should live for this moment. Starting with a song from the latest album, it reminds us of how much they have done in their almost four-decade spanning career and how tonight would be dedicated to our favourite tracks.

Their third track ‘She’s a Star’ saw crowd members singing and waving their arms in the air, with the picture on the screen showing James’ view of the crowd. Experiencing James live is almost spiritual as frontman Tim Booth stated “It’s time to come out into our full power” and referred to the cheering audience as “witches and wizards”. ‘Born of Frustration’ was mesmerising with Booth dancing and the magnificent brass elements courtesy of Andy Diagram on the trumpet.

“Written from an American point of view”, according to Booth, ‘All the Colours of You’ was truly moving, especially when performed live. Near the end, the stage faded to darkness except for an eye-catching strip of rainbow discs further elevated the sensory experience.

Before the crowd could properly belt out ‘Gold Mother’, Booth announces they need to re-start as he was in the wrong key, jokingly states, “We’re a semi-professional band and want to get this right.” Reminiscing over when they took the Happy Mondays on tour, he recounts how they broke into their rider and crashed three times, subsequently missing three gigs – nevertheless, James loves the Happy Mondays and vice versa.

Inviting Bez on stage, they may have missed a song on the setlist but it didn’t matter at all to the crowd. Ploughing into ‘Come Home’, we see Bez and Booth both dancing together on the front speaker, something which we saw throughout the gig. ‘Honest Joe’ sees Booth, Alper, and Knox-Hewson dancing together – they may be new additions but they fit so naturally, like they’ve always been part of the band.

For ‘Hymn From A Village’ only the core James’ members performed this golden oldie. Released in 1985, it was almost a decade before their commercial breakout hit, ‘Laid’.

Booth introduced it as being, “good to show you some of our old punky songs this year, written in 1984”. Their genre may have progressed but their sound was always set to be a bestseller.

La Petite Mort’s, ‘Walk Like You’ saw Saul Davies on the violin, and ‘Curse Curse’ saw everyone jumping to the track. Booth was itching to come out into the audience but he knows he can’t else he’d become a ‘superspreader’. From their latest album, ‘Wherever It Takes Us’, provides us with our own galaxy courtesy of the background and twinkling phone lights – the theme of the evening was decisively other-worldly.

Revealing that ‘Sit Down’ was the track which Booth’s father-in-law requested before he sadly passed from Covid, it was dedicated to anyone who had lost loved ones. Beginning a capella, it wasn’t long before everyone had joined in. The audience was left thinking that ‘Sound’ was the last song to be performed but, we were wrong. Despite revealing that if they went over their 11pm curfew, they’d be subject to a £25,000 fine, the true mavericks decided to carry on into the encore. With the knowledge of the penalty, the atmosphere was intense as the stakes had certainly been heightened.

During ‘Beautiful Beaches’, the light reflected on the crowd like rippling waves. It was a clear favourite from their latest album, which may sound upbeat but actually discusses climate change migration. ‘Getting Away With It (All Messed Up)’, saw Knox-Hewson and Booth sharing both a mic and the same boundless energy. The track which everyone in the room had to know, ‘Laid’ saw the craziest atmosphere of the night with both crowd and band sharing this joyous moment.

Perhaps because it was a hometown show, time no longer mattered as the band went into, ‘Sometimes’. Booth introduced it as “Do you wanna hear £25,000 worth of song” and “This better be worth it!”. It was really worth every pound spent! The band took a second bow and Knox-Hewson began strumming the guitar to further incite the audience to continue their singing. After the long period we’ve had with Covid-19 and lockdowns, this is exactly what we need as Booth said, “This is the only way to keep our mental health together”. Hesitantly leaving the venue at around 11:15 pm, many audience members could be heard reflecting on their evening. One man was enthusiastically telling his wife that ‘Sometimes’ was his highlight of the night.

Earlier in the show, they had joked that while the ‘cool’ bands were singing about Wonderwall, they were singing about childbirth. This tour saw 60,000 tickets sold and was their fastest-selling tour yet. They have more than proved their mettle and this show highlighted that the overdone trajectory of them as the underdogs should finally be over.