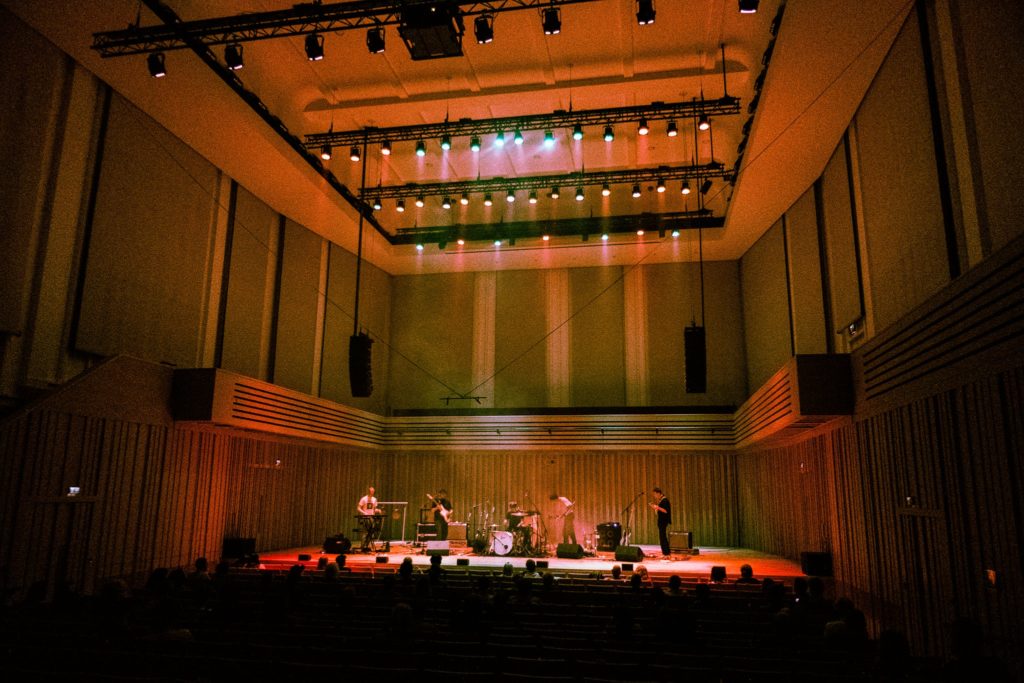 Covid may have prevented the majority of festivals and gigs from going ahead and dictated the direction of the ‘new normal’, however, Brighton-based band Squid, managed to thrive on the enigmatic energy powering their experimental music – navigating the newfound challenges with ease.

An instrumental drum beat added to the anticipation before the band could take to the stage at Manchester’s Stoller Hall, which offered a modern and well-lit stage, as well as a theatrical quality for the band to make their own. The venue’s high ceilings provided incredible acoustics which Squid used to their advantage. Before the band could perform some of their best tracks from their recently released album, Bright Green Field, and introduce the audience to some unreleased tracks, the atmospheric music, and flashing pink and blue lights piqued the audience’s interest.

The crowd may have been separated and had their faces covered due to face coverings but as they cheered due to the band’s arrival on stage, it was clear that the band and the audience were united for the first live concert since March 2020. Lead vocalist and drummer Ollie Judge, noted: “Such a professional introduction, I love that!”

Known for their creativity, they had an array of instruments in their arsenal to push all musical boundaries. The sound of the cello was the backbone, always tying their wonderfully unsettling symphonies together, as well as powerful brass elements too. A band made up of multi-instrumentalists can only surprise the ears. The first section of their set was dedicated to whimsical yet perfectly executed instrumentals, evoking anything but Ross Geller’s ‘The Sound’.

The audience was bopping to their fourth track from their debut album, ‘Paddling’ which boasted a frenzied guitar and the cocktail of instruments blended to perfection, and the echoing of “Don’t push me”, only intensified their set.

Midway through, Judge reminded us that they were, “playing lots of new songs tonight”. The new tracks were woven seamlessly into the set and continued the trend of the band utilising a variety of percussion including a cowbell and other equipment which you may not have seen since Year 6 music. Their passion for their craft manifested in their expressive playing and the brass elements gave their music a jazz-edge, contrasting with the indie-rock fuelled numbers as heard earlier.

Judge noted, “It’s so weird seeing the auditorium so full it’s like we haven’t sold the show very well”, however, in normal circumstances they’d easily have been faced with a sold-out show. Their debut album entered the UK album charts at Number 4 and ‘Narrator’ is getting close to 1 million streams on Spotify.

‘G.S.K’ was another track which was well-received and brass impressively added and Judge’s voice carried. It has to be noted, however, that usually the drummer is hidden behind the rest of the band. Each member was equally lined up in full view and their diverse range of instrumentals proves that they’re anything but all the gear and no idea.

The closing tracks were the favourites from Bright Green Field, ‘Narrator’ and ‘Pamphlets’. ‘Narrator’ began with a fast-paced riff and thumping drums acting as a war cry. Their usual final track, ‘Pamphlets’, carried the relentless energy with gusto. With each repetition of “That’s why I don’t go outside”, Judge picked up his voice. It also featured gongs, which are traditionally used for celebrations, which made their inclusion quite right.

As the band thanked the audience for coming, it was fitting that the outro track was musical pioneer Elton John’s, ‘Your Song’. Comparisons can be drawn between them, as they are both rule-breakers and have used their lyrics to comment on the world around them with flair – however, perhaps it’s their unpredictable nature that has and will continue to capture the attention of audiences for years to come.

Their latest album, Bright Green Field, is available on all major streaming services. It is available to purchase here. You can also purchase tickets for their tour here.