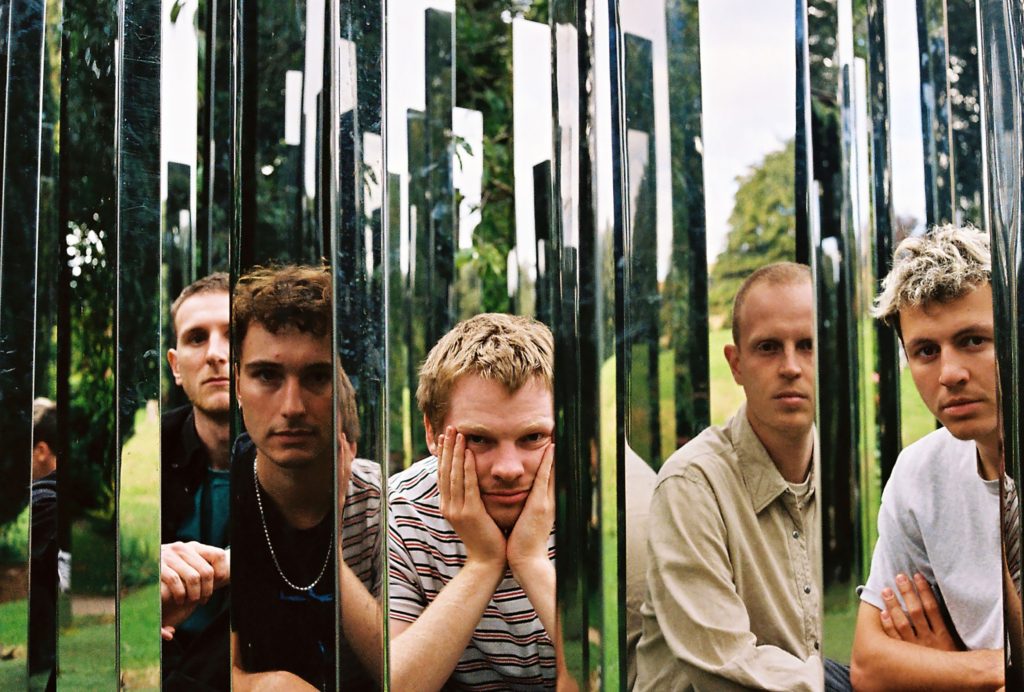 Rising musical mavericks of the industry, Squid is not only unafraid to tear up the rule book but they are gifted enough to write a new one. Their debut album Bright Green Field, is completely chaotic yet wonderfully cohesive as an album – they’re the unlikely but warmly welcomed anarchists of the sonic revolution.

Bright Green Field, marks a new direction for the band from their previously released material, which was created without limits while tackling the mindless trappings of the everyday. Notably, their EP, Town Centre, was certified by Pitchfork as “a declaration of limitlessness”. Their debut album is a brand new collection of tracks made without any creative boundaries and is even more transgressive – as guitarist Anton Pearson notes, they were motivated “by the urgency of something new”.

NME awarded the album 5 stars, stating that it was “an uncompromising debut that fulfills every ounce of the band’s potential…” The Independent has also given the album 4 stars, noting: “Squid always pushed the boundaries; now they’ve trampled them for good…” Entering the UK album chart at number 4, it seems that critics and the public alike have unanimously decided that it’s a hit.

Capturing the energy of their live performances with innate creativity, the album was recorded in producer Dan Carey’s studio basement during a heatwave. A producer who has worked with the likes of Fontaines DC and Kate Tempest, it was clear from the offset the band was in safe hands.

The opening track, ‘Resolution Square’ is a mere 40 seconds long and contains samples of church bells and sounds from nature, as well as their sound captured by a microphone suspended from the ceiling. It’s the quintessential introduction to your journey down their rabbit hole. The album actually features an array of other unexpected instruments, including bees, a choir of 30 voices, a horn, and a string ensemble featuring key figures such as Emma-Jean Thackray and Lewis Evans from Black Country, New Road.

Inspired by Concrete Island by J. G. Ballard, their second track ‘G.S.K’ gives the album its dystopian edge. Judge’s vocals are commanding and are almost unsettling when combined with the brass elements. The layering vocals after the mid-section add to the feeling of being disorientated and given how the track is almost a future version of our own, its defamiliarisation of our surroundings is perfectly executed.

Influenced by the film A Long Day’s Journey Into Night (2019), ‘Narrator’, has been streamed almost one million times on Spotify alone and there’s a reason why it’s proved so popular. Offering the perspective of the egotistical narrator, guest vocalist Martha Skye Murphy offers her exquisite vocals to take on the role of a woman trying to remove herself from the selfish narrator’s story. At over 8 minutes long, its length offers the band an opportunity to showcase their slick playing as they achieve several tempo changes and instrumental changes with ease. The haunting melody created with keyboards while Murphy almost whispers, “I’ll play my part”, is particularly effective at conveying their story.

Penultimate track, ‘Global Groove’ contained inspiration from a retrospective on Nam June Paik and how the consistent barrage of news every single day makes us less sensitive to tragic events such as war. At five minutes long, it’s clear that the band isn’t keeping radio limits in mind while writing, which is refreshing as it allows them to utilise the time to showcase their ability. A slower but no less dramatic track, the brass elements are really allowed to shine and highlights how well-planned their instrumentals are.

The closing track, ‘Pamphlets’, immediately begins with a drum beat, mimicking a heartbeat. It’s a more funk-driven number with a deceptively upbeat melody, which severely contrasts with the lyrics. It focuses on right-wing propaganda and how it’s constantly being shoved through people’s doors. As Squid’s last chance to connect with the listener, it embodies everything which Squid is about – unexpected instrumental twists and defiant lyrics.

Their music video for the track, was directed by Raman Djafari. It is described as a video of two halves and Djafari has stated in the 8 minutes animated video that, “The video for Pamphlets is a meditation on the feeling of being unfit, unlovable, not compatible and the manic anxiety and stress that this results in.” Djafari elaborates, “The transformation that happens when we learn to love ourselves is a detachment from the ideals of normativity. Loving the difference, that which is perceived as ugly and rotten, is beautiful. At the same time, it is an unlearning of the false truths that have been etched into our minds and hearts.”

The influences driving the album are as diverse as the instrumentals, from post-punk to jazz, it’s an impressive mix only bolstered by the literary influences present. The band’s interest Douglas Coupland’s reasoning that we’re living in the Extreme Present, as well as Mark Fisher and Merlin Coverley’s writings on Hauntology and the slow cancellation of the future, culminated into the band’s creation of a dystopian landscape that isn’t too dissimilar from our own. The band’s overarching ambition could have been the musical equivalent of a car crash, however, due to the band working equally to achieve a unified goal, this easily prevented that outcome.

LiveNow is an on-demand and live streaming service and is hosting a new series, ‘Live From Another World’. Including Squid, it features artists such as Griff, Greentea Peng, and Black Country, New World. The first episode is dedicated to Squid, which is completed with exciting visuals to match their ingenious sound. You can sign up for all four performances for free here. The band is also, hopefully, heading out on tour in the next few months, which means that you’ll be able to witness their innovative approach to music first-hand.

Their latest album, Bright Green Field, is available on all major streaming services. It is available to purchase here. You can also purchase tickets for their tour here.