You are here: Home / Culture / Music / “It was like The Shining”: The Academic on their festival experiences, television debuts and haunted hotels 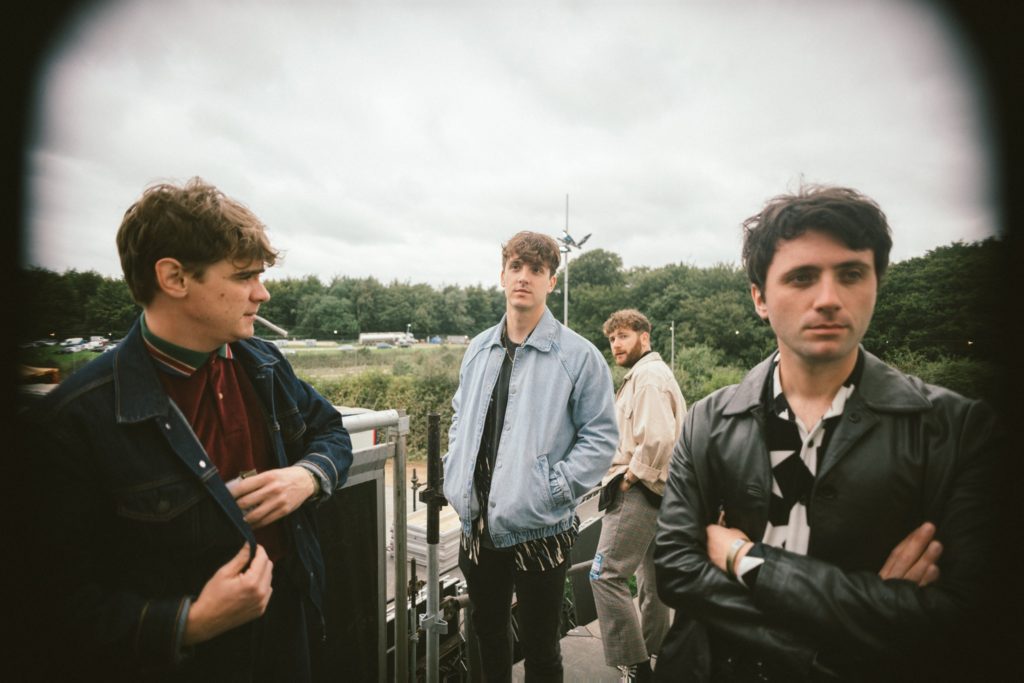 Coming together after meeting in school in the small Irish town of Mullingar, they bonded over a love of toasted sandwiches and naturally, music. Sharing stages with bands such as Twenty One Pilots and Catfish and The Bottlemen, The Academic aren’t strangers to their own sell-out headline tours. The band consists of vocalist and guitarist Craig Fitzgerald, drummer Dean Gavin, and brothers Matthew and Stephen Murtagh on guitar and bass respectively.

After an incredible set at Leeds Festival, aAh! Magazine sits down with Craig Fitzgerald and Stephen Murtagh of the fast-rising indie band. It’s clear that the band are as charismatic as they are talented – perhaps it’s their  Irish charm. We delve into their festival experiences, television debuts, and that haunted hotel with a slide…

It’s been 533 days since their last show, not that you would have known from their explosive set. Stephen Murtagh starts: “We don’t know how to feel […] We were at Reading and then it’s very strange how quickly you just get back into things. It just felt like yesterday, we were so nervous. We  forgot what live music was like. We went out and played to the crowd and  then today, it felt like, ‘Oh, yeah, another one’. It’s very strange how quickly you fall back into the touring mindset.” Craig Fitzgerald jokingly adds: “You get very used to the shit hotel coffee”, while Murtagh injects: “Living out of the suitcase.”

One thing the band hasn’t missed about touring? Hotel fire alarms. Fitzgerald recalls, “We were in the hotel last night in Leeds Bradford Airport Hotel. Sorry to diss them, but like it was a disaster at two o’clock in the morning. Fire alarm, the whole hotel goes outside in the street.”

The whole hotel except Murtagh, who shares: “I stayed in my room while this was happening. I was happy enough to accept death if it came to it.” Fitzgerald adds: “But it was good. It was like, ‘Yeah, baptism of fire. that’s how I feel’.” What they simply describe as being “back on the road”.

They’ve had worse festival experiences. Murtagh recalls: “A couple of years ago, we did a weekend where we played three festivals in three different countries. We did a Friday at Electric Picnic in Ireland. And then, we did Saturday at a street festival in Vilnius, Lithuania. And then on the Sunday, we had to go to Wales and play festival Number Six. There were rumours of it being cancelled due to terrible weather. We went over and people were leaving the festival as we were driving in for the Sunday – for the last day. There was mud everywhere. It was very difficult to get transportation around because even the little buggies were struggling in the mud. We walked out to a tent, it’d be like 15 [or] 20 people up to their ankles in mud and [I have] nothing but respect for the people who stayed. But I mean, that was…” he tails off. Fitzgerald adds: “I remember eating a very soggy burger. That’s my memory of that day. I broke a couple of guitar strings as well. Not good.”

Not the most ideal situation by any means but as Fitzgerald believes, they’re lucky if that was their worst experience. The main kick in the teeth being “the fact that we were arriving and people were leaving. And then, we saw people up to their knees in mud,” he says.

They had been at two festivals already  and were mentally tired but the band do usually enjoy a festival, as they say that, “It’s a nice break from headline stuff.” They do mostly have good festival experiences.

Murtagh recalls: “In 2018, we played at Rock Werchter in Belgium. We got a huge crowd. We played a great set. And then, we had the day to kind of enjoy [ourselves]. It was like one of [those] European communal backstage areas. We saw Noel Gallagher walking around, and David Byrne.”

It was also great for the band as they could actually go and see other acts too. Fitzgerald says: “I think I did, Sigrid, into David Byrne, into Nick Cave, into Arctic Monkeys.” Murtagh agrees, “That was a good day.”

Focusing on their music, they released their Acting My Age EP last year and this year’s festival run  marked the first time that the band could play them live. When asked how it felt to play the songs live for the first time, Murtagh notes: “Super strange. What makes it even weirder, our last EP came out last summer. That was also a COVID release. We’ve got songs that are fully a year old in our head – they’re not new songs anymore. But we’re playing them live to humans for the first time ever.” Fitzgerald added: “For us, we have to road test songs when we were playing. That’s how we would know if a song would stay or get in the bin.”

It’s a tried and tested way for the band to gauge the potential success of the track. As Fitzgerald reflects: “We were making the EPs at home, like we made the latest EP in [Murtagh’s]  bedroom. It’s so weird to not have any idea if people like it, other than his Mam foot tapping while she’s hoovering in the hallway. It’s kind of a strange way of judging.”

Murtagh adds: “We sat on the Acting My Age EP for a year, not knowing how to react to it. That’s the polar opposite of what our experience with music has been. To the point where we wouldn’t even record a song, unless we knew it got a good reaction from a crowd. That’s how we test it. It’s very strange. It’s like our world was turned upside down.”

As our interview nears to a close, we ask if there was anything they’ve never been asked before but wished that they had. Murtagh already has something in mind. “I wish someone would ask me, Stephen, when was your television debut?” Fitzgerald appears to have been expecting this from Murtagh, as he exclaims, “He brings this up all the time in interviews.” If you’re wondering what his television debut was, it was on an Irish quiz show when he was 12-years-old.

Fitzgerald has his own story of when he too made his screen debut. “I’m gonna talk like I was on TV as a kid. I went to see [Manchester] United and Bayern Munich. I was only eight at the time. It was the time when Sky Sports had the screens that you could view the match. I was there and I got hit by the ball.”

Moving away from personal stories and towards band-orientated ones, both band members admit their love of sharing tour stories and their experiences from the road, such as about what happened in Kansas City in 2017. Fitzgerald’s story of choice is centred around a hotel with a slide. Murtagh adds: “I was gonna say the one where the concrete hit the front of our van  and smashed our windscreen. As you can tell, we’ve got a lot of stories.”

Fitzgerald reveals more about the hotel with the slide. “None of us know where it was. It was in the middle of America somewhere like Iowa or Idaho. We got to this hotel at like two in the morning. The lady on the desk was drunk and wanted to drink with us. And I think we went through [the hotel] and it was like a waterslide. No, it was like an abandoned waterpark inside the hotel. It was like The Shining.”

Murtagh was left questioning, “Why is the waterpark closed and what terrible thing happened?” With Fitzgerald adding that there were the “craziest things on the carpet. People got rashes from the beds.” If that’s not awful enough, according to Murtagh, the band were the only people staying at the hotel at the time.

It’s clear that the band has had their fair share of experiences.