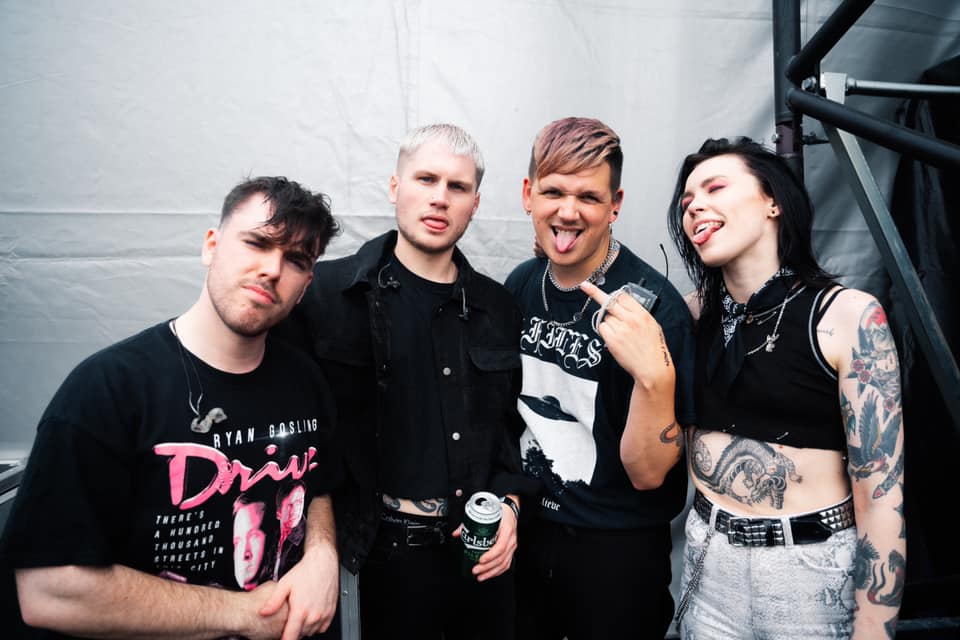 They’ve already soundtracked The Foo Fighters car journey, supported a host of rock’s hottest property, and now the explosive pop-punk band has successfully smashed their set on the main stage at Leeds Festival. Dual-fronted by Jim Shaw and Hannah Mee, Hot Milk are proving that double the voices mean double the power. The Manchester-based band is celebrating the differences which make us unique.

After performing a stand-out set at Leeds Festival on Main Stage East, aAh! Magazine sits down with Jim Shaw and Hannah Mee of the incredible pop-punk band. As authentic as the music they strive to create, we get to know more about their festival essentials, their forthcoming tour, and how they always aim to bring the party.

How are you feeling about this year’s festival?

Jim Shaw: “It’s good. I just wish the sun had come. We were lied too.”

Han Mee: It’s good and weird at the same time. It’s one of those moments where you feel like, ‘Oh my god, it could be taken away from us at any moment. You’re kind of waiting with bated breath. I mean, it’s great but I don’t get to enjoy it too much. I mean, just in case. It’s one of those protection things. I don’t want to get hurt again.”

Is there anything that has surprised you?

Mee: “We’ve played early for the first time and I think it’s quite strange for us to have to be up before midday.”

Shaw: “I’ve been wiping the sleep from my eyes but it’s quite nice that everyone was still up for it. For people, this might be their first festival just literally coming in and giving everything from the get-go. “

Mee: “Our people have brought it today. I was proud of them because it’s early performance, 12 ‘o’clock on the main stage is early doors. They were ready to go and they brought it. That surprised me but also didn’t at the same time because I know our fans are ready for a party.”

What has been your favourite track to play?

Shaw: “We’re playing a couple of new ones from the E.P.”

Mee: “My favourite’s your least favourite.”

Shaw: “I still love ‘I Just Want To Know What Happens When I’m Dead’.”

Shaw: “We just come straight in with it, there’s no chill.”

What are your festival essentials?

Mee: “If I’m coming to a festival or when I used to, wet wipes every time. I don’t like showering at them because I feel like it’s just a bit exposing. It’s cold and it’s not fun, is it? Just used to have wet wipe shower.”

Mee: “Wet wipes, booze, and wellies. Don’t forget your wellies or docs. Toilet roll. You have to basically survive.”

Shaw: “It’s like SAS when you get here. If it starts raining that’s it. Survival of the fittest.”

How do you feel your EP has been received?

Shaw: “I think everyone likes it.”

Mee: “It’s hard as we released the first song before gigs came back. It’s hard to gauge whether people like it as you’re seeing it in real life. You’ve only got the internet and I don’t trust the internet. I’m a bit of a natural, cynical person. It’s like, they don’t like it until they start singing it and they sang it today.”

Shaw: “They sang it at Download, pulled an ear out and it’s nice to hear what people think. I think we’re super proud of this EP, like we spread the best tracks with Don. We just really wanted to put it out there and be like, ‘This is us, please like it’. I guess.”

Mee: “I mean they’re the best tracks of our career so far. But they’re not the best tracks we’ll ever write. It’s one of those. It’s a nice stepping stone for us to keep moving forward. I’m excited to do the headline shows, be able to meet people face-to-face, and be like, ‘Do you like it?’”

What can we expect from your forthcoming tour?

Mee: “I want every person to know that they’re coming in for a bit of a workout.”

Shaw: “We’re going to enjoy ourselves and we want everyone else to enjoy themselves.”

Is there anything which you’ve never asked but wished that you had?

Mee: “Am I okay? How are you? Would you like a million pounds?”

Shaw: “The answer would be yes.”

Shaw: “True. I mean, you tell people everything.”

Shaw: “You don’t have to ask everything.”

Mee: “I will literally tell anyone anything. When you go through stuff in life, you kind of get rid of all your barriers. I’ve got no barriers left. And, I tell everyone your secrets by default.”