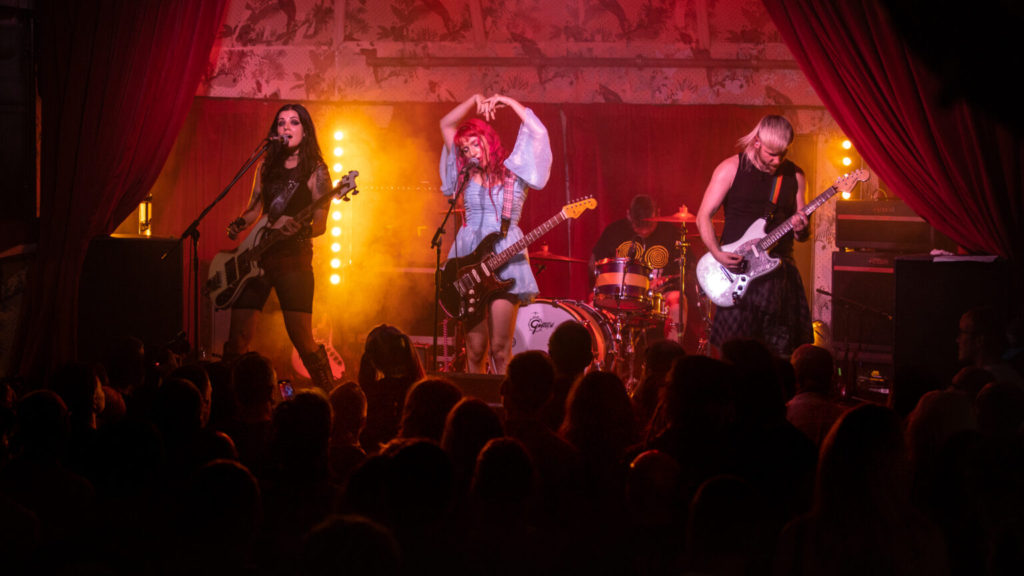 After the ongoing Covid-19, punk-band Hands Off Gretel was finally able to put on their ‘Still Angry Tour’, a tour dedicated to the release of their Angry EP (2020). The fiery tracks have long been part of their live show and are a call to arms against a range of topics – including sexual harassment and what it really means to be punk. Inciting a revolution one track at a time, the live arena is where the band really shines. The band consists of Lauren Tate (guitar and vocals), Sean Bon (guitar) Sam Hobbins (drums), and Becky Baldwin (bass).

Thankfully, avoiding closure last year, The Deaf Institute, was the perfect intimate setting for their live show. During the show, it was announced by Lauren Tate that she’s, “always wanted to play this venue as it’s so cute and almost got shut down. Cheers, let’s toast to live music and the rest of our lives.” Toasting with water, it’s a true testament to the power of live music, bringing people together, as the audience was a true eclectic mix. Also, the band’s D.I.Y ethos was immediately apparent after spotting their merch which was all designed by Tate, bar one, which was designed by a fan – their community spirit shining through yet again.

Before Hands Off Gretel could take to the stage, their support act Scarlet was the first to warm up the crowd. One look at opening band Scarlet’s Instagram will inform you that the band “Likes to kick hiney”. The four-piece consists of Jessie (Vocals & rhythm guitar), Adam (Lead guitar), Cai (drums), and Laura (bass guitar). Their set could be summed up as a plethora of addictive punk-rock tracks. Their track, ‘Your Control’ boasted true riot grrl energy and saw the crowd bobbing their heads along. Showing both Jessie and Laura rocking out on stage, an instrumental section showcased their obvious talents – all clearly know how to own a stage. It may have been their first gig back in 18 months, however, you never would’ve known. Their new track, ‘In and Out’ was written during lockdown and featured drums powerfully thumping like a heartbeat.

Before they could launch into ‘Wrong Way’, Jessie joked that, “Usually I’ll crack a really s*** joke, I’ve got a lot about cats”. They needn’t have worried, they’d already won the crowd over early on. Perhaps their strongest track of the night, ‘Wrong Way’ saw Jessie expertly holding a note and singing forcefully emotive lyrics. Marked down as ‘Fear’ on the setlist, their final track was written in lockdown too and was described as about, “being scared of changes such as pandemic is a reminder to stay true to yourself”. It was a slice of pop-pink perfection and saw the crowd cheering. An empowering song to end on, as Jessie sang, “Can hold your head high”. After an explosive set, the band can hold their heads high, indeed.

The venue was packed ready for Hands Off Gretel to take to the stage. Their enigmatic frontwoman, Lauren Tate took to the stage barefoot – perhaps in a bid to ground herself to the abundant energy ricocheting around the room. They immediately powered into a heavy track, ‘In The Eyes’, while headbanging back and forth, while jumping up and down. It’s a track the crowd clearly knew well and Tate announced, “If you know that one you are an OG”. From the first track, it was clear how tight-knit the Hands Off Gretel community, is – which makes sense as the band admirably prides itself on inclusivity. Their track ‘Milk’, was dedicated to animals and was a self-proclaimed ‘vegan anthem’ and continued the headbanging trend. Apparently written about Tate’s cat, ‘Alien’ saw her jumping up in her blue frilly dress and screaming her lyrics. It may be perceived as a juxtaposition of connotations but that’s perhaps the most punk thing.

Tate took a minute to reflect that her hair may have changed since their last show but they “still want the world if anyone’s offering”. Their track ‘I Want The World’ saw Tate without her guitar, kneeling and dancing on stage. Their track ‘S.A.S.S’ is about “being loud and proud and confident and about being in people’s faces”. One of the most empowering tracks from their repertoire.

A shrewd observation of when performing ‘It’s My Fault’, Tate said: “This seems to be like men aged 40+ that belt this the loudest, they seem to be feeling it”. Surrounded by pink light, the moving track saw the crowd taking in the powerful words. Before the almost ominous-sounding ‘Bad Egg’, Tate informed the crowd how bandmate Baldwin had fixed and saved her dress before the show. ‘Rot’, has never been played live before and was another example of their poignant songwriting, such as, “I’ve never understood why the bad things start out good”.

Their song ‘War’, was described as a new song which we may not have heard before, and about “a very serious topic”. Discussing toxic masculinity and rape culture, it was intensely thought-provoking. Singing that they are, “Gonna start a revolution”, it’s one which we all need to join. The questioning at the end, “Why won’t you believe me?”, was unsettlingly on the nose. After their track, Tate declared, “I don’t care if you liked it, did you feel it?” The crowd and the band alike both did.

From their latest Angry EP, ‘Don’t Touch’ was stripped back for the end as Tate sang, “I’ll scream” – hammering their message home.  ‘She Thinks She’s Punk Rock n Roll’ depicts their experience in the punk scene and as proved, you can scream and wear a frilly dress – it doesn’t make you any less punk. They also used this opportunity to call for more non-binary and females on line ups. ‘Bigger than me’ is one of their heaviest tracks in meaning and at the end it almost sounds like a nursery rhyme – even more unsettling live.

‘Kiss Me Girl’, is a known Spotify favourite and saw members of the crowd punching the air. Bon kept the tension going with his guitar while the rest returned for one more track. Their encore track was introduced by Tate as one which “you might know unless you’ve been living in a hole, you might have, I don’t judge”. A cover of Nirvana’s infamous ‘Territorial Pissings’ was the perfect last song, grunge-rock at its best – the band really made it their own. A final image of the crowd having their arms outstretched was another reminder of what had been missed due to the lack of live shows able to go ahead.

Overall, it was an incredible evening had by all. A triumphant return to the stage by the underground’s most-loved punk band. The inspiring lyrics in their music surely left the audience thinking about them long after they’d left the venue. The tracks on the Angry EP, have long been a mainstay in their set, but it was wonderful to be able to buy a physical copy of it on vinyl, which was then signed by the band – the ultimate gig memento. Next time the notoriously inimitable band is in town, be sure to purchase your tickets quickly as you’re guaranteed a night to remember.

You can stream their Angry EP here.