You are here: Home / Culture / Music / Review / My first experience as a music journalist at Leeds Festival 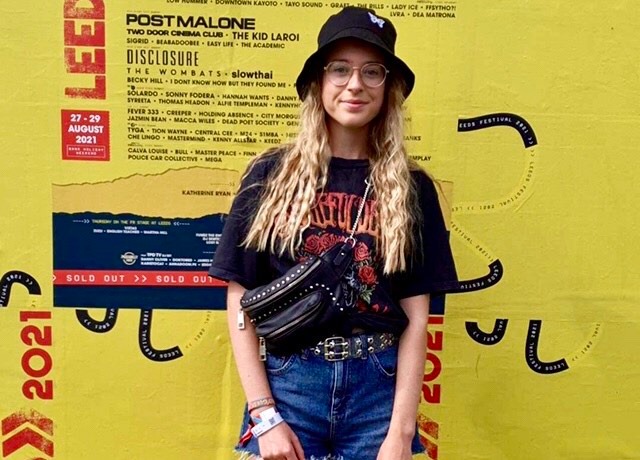 From stand out sets to lateral flow tests, aAh! editor Camilla Whitfield shares her first experience as a music journalist at Leeds Festival 2021.

Ask anyone who is aspiring for a career in the music industry and working at a festival will surely be on their bucket list. It would be naive, however, to merely describe the experience of Leeds as a festival. It quickly became apparent that the connection between those working, bands and the crowd alike, ran through the core of the experience. Bearing a gruelling four-night camping was nothing compared to the triumphs of actually having a press pass to Leeds.

The morning consisted of packing the car with many bags and completing a lateral flow test as proof of my Covid status. It did make the festival appear much safer, knowing that everyone would be required to do one. Navigation never was one of my strengths and after checking in at the wrong desk and parking in the wrong car park – we finally collected our weekend guest, press, and Covid status wristbands.

Our next job was setting our tent up. No mean feat indeed, we successfully managed it – much to my disbelief. The true community spirit of a festival was immediate as while we were setting up our tent, our neighbours introduced themselves and kindly even offered to help. Combine this with the showers, toilets, and friendliness of the staff – camping life certainly didn’t seem as bad as its reputation.

Due to our late arrival, we missed some of the bands. We did, however, get to see Zuzu and Vistas. Both were incredible and certainly whet the appetite of the crowd for the weekend of live music to come.

It wasn’t long before the first day of the festival was upon us. The weather may not have been off to a great start, however, Nottingham-based band, Blondes brought the quintessential melodic tracks. In the afternoon I managed to interview Manchester-based band Hot Milk and found out more about their festival experiences and what to expect from their live performances.

The Struts were also around doing interviews too, which made it even more of a unique opportunity as to how often would you be able to sign up for interviews on the day? As lovely as Zoom interviews are, it was so refreshing to get back to face-to-face ones. During the afternoon I also met The Hunna’s tour manager, Matthew Willford, and found out more about his advice for those wanting to break into the industry.

After a day of several amazing acts, headliner Liam Gallagher was the perfect choice to finish the festival – the audience singing to ‘Wonderwall’ and several bouts of shining fireworks were definite highlights. Love him or loathe him, it was a once-in-a-lifetime performance.

The sun was out in the force this morning and provided a rude awakening about the reality of tents – prepare to be freezing at night and boiling in the morning. An electric blanket would have been very welcome. Seeing Nothing But Thieves and The Snuts back-to-back on the Main Stage West was the perfect start to the day.

The food vans dotted around the festival were always heaving – and for good reason as like the music, there truly was something for everyone. Quickly becoming a connoisseur of Leeds’ vegan offerings, the messy kebab and ‘The Homer’ doughnut were perfectly made.

After another day at the press tent, it confirmed what I’d already realised – that it with teeming not only interesting but truly lovely industry professionals. Punk band from Essex, Bad Nerves’s drummer, Samuel Thompson, shared his thoughts on festivals. After a stand-out set, they’re surely set to dominate the Main Stage too, and not just to support their friends Nothing But Thieves from the sidelines.

Also, acts such as Ashnikko, Bad Boy Chiller Crew, Nova Twins, Yonaka, The Hunna could be seen doing press or enjoying a drink in the sunshine. Bringing his family along to the party on his stage, headlining act Stormzy was everything you’d expect and more. I don’t think anyone would forget him coming down to the audience and piling on various sunglasses and bucket hats – clearly a man of the people.

Before the crowds could enter the arena, I made my way over to press to plan the day’s interviews. While there I met Radio DJs Sunta Templeton and Katie Owens. Both of them were so lovely and offered some great words of advice for forging a career in the industry.

After their explosive set, I caught up with The Academic and discussed their most wild tour stories. It was also lovely to meet freelance videographer Mark Forrer, who was there for Rocksound. If anyone knows me, they’ll be familiar that I always cite Yasmine Summan as one of the people who inspired me to go after a career in music journalism. There on press for their exceptional podcast ‘On Wednesday’s We Wear Black’, they were accompanied by fellow podcaster, bassist, and producer Alyx Holcombe.

After getting a photo with their signature poses, sharing advice, and gifting me one of their podcast pin badges, it was time to refuel. The Street Eats food vans were catering for everybody, vegans included. I ordered a vegan frankfurter which suspiciously tasted exactly like meat – perfect food for the festival.

Calva Louise is one of the loveliest bands I’ve ever met and it was interesting to talk to them about their music and even find out more about their pets too – one of them has one called Axel, if you were wondering. They also kindly gave me a CD copy of their latest album, Euphoric, which was played on full blast on the drive home.

I’ve long admired The Wombats and being able to hear ‘Turn’, was a moment that I’ll never forget. Their lyrics are so intricately crafted and are even more emotional in person. Although, at times seeing a certain inflatable did change the mood slightly.

Headliner Post Malone has to take the award for the loveliest musician to ever grace the Leeds stage. His talent is undeniable but his humbleness and penchant for smashing a guitar were made obvious – a true rockstar indeed.

After the best few days, the bittersweet arrival of Monday came. As much as the thought of finally returning to a normal bed and toilet was comforting – it was a shame to pop the Leeds Festival bubble. A hub of talent and incredible industry professionals, hopefully, I’ll find my way back to Bramham Park next year. It’ll surely be even bigger and better if anything is indicated by previous years. The only thing which isn’t guaranteed is the weather but the resilient Leeds crowd isn’t likely to let anything dampen their fun. See you in the fields next summer.