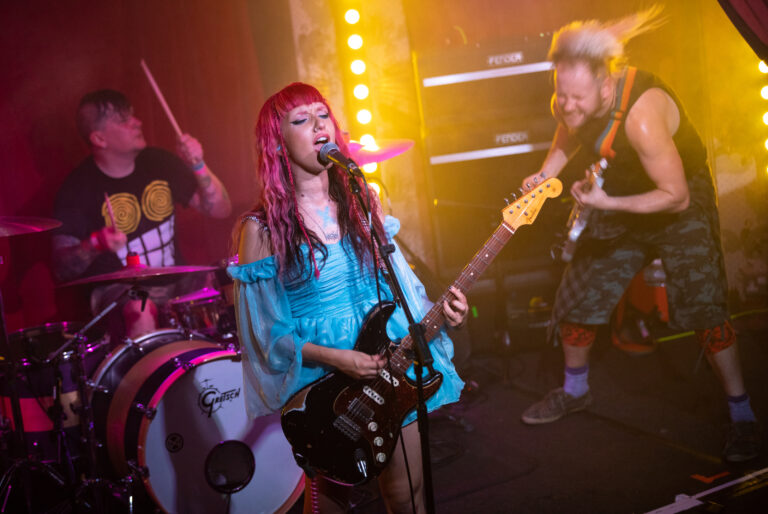 Punk band Hands Off Gretel has long become synonymous with being outspoken and standing up for what they believe in, along with a truly limitless imagination. Manchester’s infamous Deaf Institue was the quintessential venue, furnished with a glitterball and wall of speakers – it was most fitting for a band who prides themselves on their live performance. The band consists of vocalist and guitarist, Lauren Tate, guitarist Sean Bon, drummer Sam Hobbins, and bassist Becky Baldwin.

​​Before they could take to the stage at one of Manchester’s most loved venues, I caught up with them backstage to find vocalist and guitarist Lauren Tate having her blue floaty dress fixed by bassist Becky Baldwin. First and foremost, this band is a family. This notion of always looking after each other extends itself to their fans too, through both their live shows and their music.

Celebrating the release of their Angry EP, it may have been the first time the band had officially released them but they had long been part of a Hands Off Gretel show. As Tate explains: “I think the songs have been written for quite a while, because we were performing them live for about two years.”

Her favourite story while performing one of the tracks from their Angry EP is ‘Don’t Touch’. She starts: “I was really angry once because we performed it – I can’t remember where we were in Germany but it was a really cramped little venue. The night before this man tried to kiss me and he grabbed my face. He’s trying to kiss me and I pulled back from him. And then, at this next gig, he was in the audience. I remember screaming, ‘Don’t touch!’ I looked right at him.”

Baldwin adds: “I think they were meant to be. They were destined for the last album, ‘I Want The World’, and they just didn’t fit the vibe.” Tate agrees: “I really wanted ‘Don’t Touch’ to be on the album. But it made more sense doing it later because we performed them live and they changed quite a bit. It all happened for a reason.”

Some of the best things happen when we least expect it and this EP is no different. An empowering collection of tracks once officially released they were warmly received by many, as Tate knows.

“I think whenever I announced that one on stage, everyone’s reactions on Spotify and everything, I think ‘Kiss Me Girl’ is our biggest one on Spotify. I’ve recently moved over to TikTok and the number of people making TikToks to ‘She Thinks She’s Punk Rock n Roll’. I was like, ’People really like this one!’. And, because it was kind of the most punk track, I never know if people are gonna like it, or if it’s a bit too in your face. But it turns out people like it in your face.”

This message is also taken into their live shows too. “I think you’re kind of underestimated especially in a punk scene where it is entirely dominated by men,” says Tate. “There are a lot of women in punk but I think the whole scene is a lot of old men. When you’re walking out onto a stage they take one look at you and judge you and think, ‘Do these people really know anything about punk or they’re just young kids that know nothing!’ It’s kind of like you have to prove yourself and say like, ‘I have every right to be stood on stage and even in my frilly dresses, I’m still punk rock and roll.’”

Baldwin adds: “There used to be set uniform in the old school punk, a lot of people think that still. But punk is anything that makes people look twice and think, ‘what?’ If Lauren and her floaty dresses make them go like, ‘What, that’s a bit weird.’ That’s still punk.”

According to Tate it’s “like making a statement”. She says: “It used to be such a statement to have a mohawk but then you play a punk gig and everyone has a mohawk. It’s like it becomes uniform and we don’t really have a uniform. We do what we want.”

Flipping the term ‘Punk’ on its head, being yourself really is the most punk act you can do. It’s an empowering attitude which the band takes into the music behind their lyrics too. They never stick to a single genre. “It keeps it interesting,” explains Tate. “Having songs where it’s like this song is more grunge, this song is more punk and this song is like a ballad.”

Each song usually has an unexpected twist thrown in, their track ‘Bigger Than Me’, almost sounds like a nursery rhyme at the end of it. It’s a quality in their tracks recognised by Tate, “At the end of ‘She Thinks She’s Punk Rock n Roll’ with the clapping. I like creepy things. I like to make it sound like children in the playground, clapping along to a really heavy song.”

The band’s creativity is limitless. “I just have a very vivid imagination,”reveals Tate. I feel inspired by a lot of things and I find it really easy to put it into my art put it into my music and not be afraid to try things out.”

Fighting injustices one song at a time, it’s garnered the band an inclusive and tight-knit community. A safe space where fans can meet and make other friends, an aspect of live shows that the band has long recognised. “It’s amazing,” says Baldwin.

“On this tour, in particular, it seems like a lot more like young alternative people have been coming to the shows, and it’s always so good to see them in a place where they can meet together. They feel safe, I hope they feel like this is a safe space for them to express themselves if they want. We don’t know what kind of crowd we’re going to get in. But I hope the gigs are somewhere they can do that and really express themselves.”

Tate adds: “You see like, when we played York, there were all these young girls stood together. At first, I was like, ‘Oh, they all look like they’re friends.’ But then they’re like, ‘Oh, we met each other tonight and we can speak on Instagram!’ They’re all making new friends. And it’s like, that’s what we want to see. That’s what I’ve been trying to aim towards since I started music. It’s like, if I can make a space like that for people to meet people, you know you’re doing something right?”

We’d have to agree and they have their own vast collection of fan stories. Tate says: “There was a girl that came to Watchet Festival and she [told us she’d been] in hospital for a year. She was really struggling and she listening to Hands Off Gretel had got her through it. She didn’t think she could make it to see us back before we had to reschedule the tour. And, now we rescheduled it, she was front row and singing every single word. We met her afterwards, and she was just like, ‘You’ve no idea how much it means to me.’”

“You forget how powerful music can be for somebody, right? Every night people will come up to me and tell me how much my music and lyrics have meant to them and stuff. It’s amazing.”

It’s touching to hear the band themselves reminisce about their own idols. Tate’s main idol was P!nk, even though she knew she’d probably never meet her. She notes: “I idolised Courtney Love as well. When I was 14 or 15, everything was her. I’ve had many different ones like Janis Joplin as well, but I’ve never met anybody. I’ve never got to meet them yet. I don’t know what I do. I don’t know what I’d say.”

Baldwin’s inspiration lies in one of the most prominent metal bands of our time, she explains: “When I went to my first proper gig I went to on my own was Motorhead. I thought Lemmy was so cool. It inspired me to pick up a bass and to keep playing ad that sort of thing. All the metal bands, like old school ones.”

It also seems to have come full circle as the band gets quite a few fans who say they’ve inspired them to pick up an instrument. Baldwin recollects that they had one recently in Buckley. “I think a girl said that,” says Tate. She adds: “We get so many bass players and they don’t always meet Becky. They come up to me and they’re like, ‘Oh, I really want to say hi to Becky because I’ve recently picked up the bass because of her. I’ve met a lot of bass players because of Becky.”

Changing the stereotypes at every show, Baldwin exclaims: “It’s great to hear. I guess there aren’t that many girls playing bass, especially. And, just to hear of anyone who’s inspired to pick it up because they see us and see how much fun we’re having. I think the thing they didn’t realise is how much fun a bass player can have and how they’re normally in the shadow of everyone else in the band but actually, they’re kind of cool. I like that.”

Inspiring others and standing up for others is central to DNA of Hands Off Gretel. After realising that women were on the receiving end of sexual assault at their gigs and both Tate and Baldwin having experienced it first hand – Tate published an open letter to men. The origin of the post, according to Baldwin “was all kind of Lauren’s frustration really. We were a bit surprised when the posts came out, but we knew something was coming.”

Confirming the post came before the release of the Angry EP tracks, Tate explains: “I had written them. But I think I wrote that post, I might have been recording the EP at the same time or slightly afterwards. Because I remember channeling all of that anger and emotion into the EP. Thinking like, this is this a screw you.”

“It’s like a middle finger, like these songs are unapologetic. Singing songs like ‘Don’t Touch’ live as I’m looking around the crowd like, ‘Yeah.’ It’s something that’s always on my mind all the time. When I write and when I perform, it’s to create a safe and fun space is a key priority for me.”

Baldwin asserts: “We might lose some fans along the way. They take it personally, it’s like, ‘Why do you take it personally?’ That means you’re the person who’s done it but the only people we’re calling out are the people who are really inappropriate. If you feel offended, just go. We don’t want you here.”

They’re admirably trying to create a safe space where their fans can drink and enjoy music without risk – which is exactly how it should be. As for what drink Hobbins would recommend: “It would have been a really trendy hipster IPA, not long ago. But at the minute, I’m really enjoying vodka because it’s easy to drink, hangovers aren’t too bad and it’s really low in calories. I’m type one diabetic and it’s really good for diabetics, compared to cider.”

We’ll see you at the bar ready to re-hydrate at their next gig.

You can stream their Angry EP here.