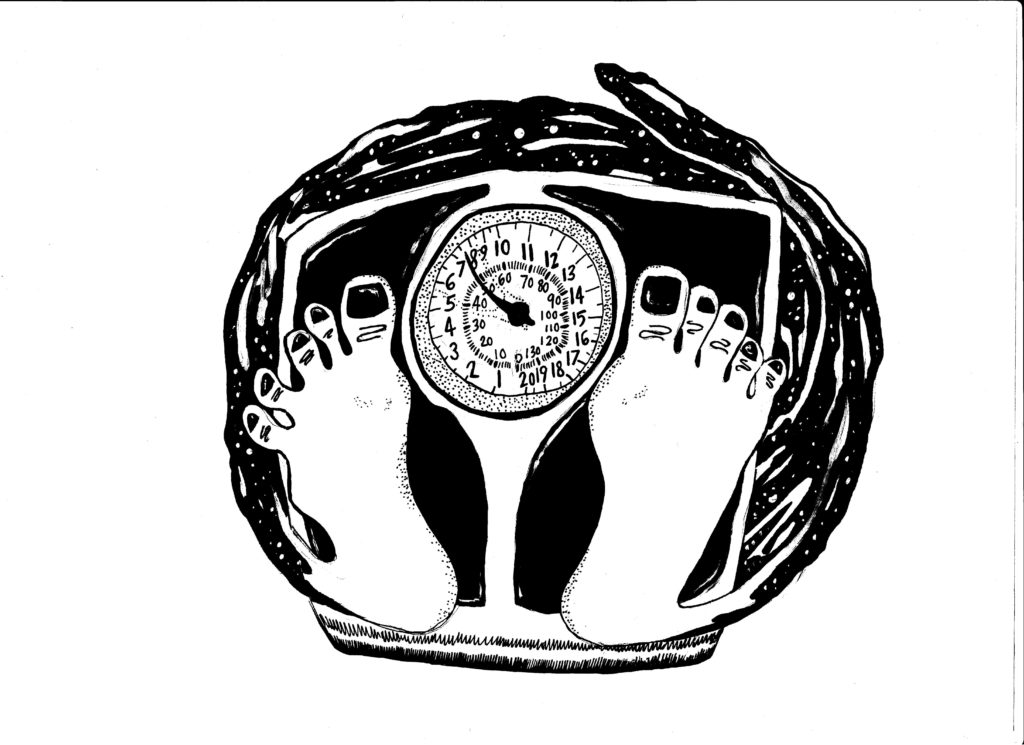 Trigger Warning: People who have had issues with eating disorders, self harm, body dysmorphia or weight may find this content distressing, trauma reinforcing or triggering. If these issues affect you, please seek medical support.

I put down the packet of hobnobs. Or more accurately the packet that used to contain Hobnobs. It was not a full packet, but still, I had finished them. I went to the bathroom and caught sight of myself in the mirror. I am disgusting. My fat actually sagged now, like an old, deflated tyre, except covered in long silvery mismatched lines. Why did I finish them? Why did I even have one biscuit, knowing the inevitability of the ending, knowing that I can never stop at one.

Mark Twain once said, ‘Comparison is the death of joy.’ I can identify with this. I love my friends. Genuinely I do. But it is true that I also hate them. When we dress up to go out, standing next to me, they are supermodels. Sometimes I think that is the only reason they invite me. It is certainly not for the men that I attract.

I stand and stare at the mirror and feel physically sick. I am truly grotesque. In my nightmares I imagine other people seeing me naked. Some people dream about fires, kidnappers, bombs, or monsters. In my dreams, the monster is me.

I am not sure how I got here, when I went from curvy to disgusting, from having low self-esteem to pure hatred of myself.

When I was 12 and my mum suggested I try some new clothes, I wasn’t overly interested. “It is just the body that I happen to be living in mum, who cares what I wear?” I was so free, so unaccustomed to meanness, judgement, cruelty.

It’s time to engage in the daily dance with the silvery object of torture in my bathroom, the scales that claim to know the answers. I step on and then off. I look at the number, then check it again. If it flickers to another ounce…it will provide the proof I need that they don’t work, that the scales are conspiring against me, trying to trick me. Today, after 8 attempts, they consistently maintain their lie. 7 stone 10lbs and 4oz.

My counsellor suggested that binging is a form of self-harm. This gave me some hope. Perhaps I could swap it for an alternative self-harm method. Something that will not make me fatter. Apparently, the buzz, the rush you get is quite similar.

I look at the toilet. I could make myself sick? That would ease some guilt. Wouldn’t it? Though I read it also ruins your skin, gives you yellow teeth, could actually kill you. Being found dead next to the toilet after finishing a packet of hobnobs. How humiliating.

Then it occurred to me, who would dress me? Do they not usually dress you up for the funeral? Would someone see me naked? Oh my god. I cannot die, not like this. They would be disgusted.