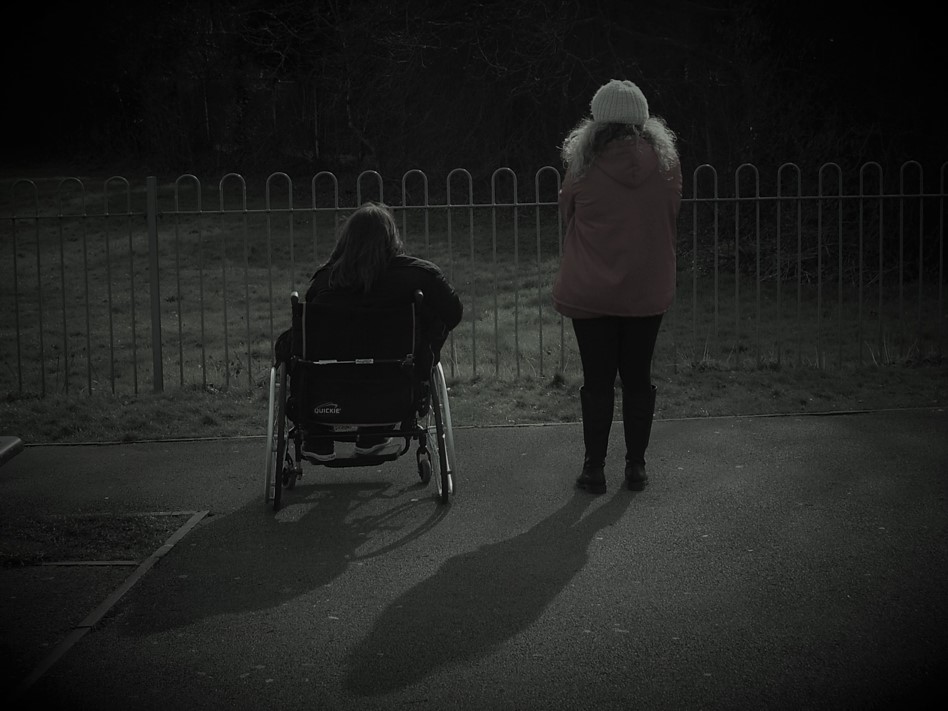 Sitting in that small, clinically white room, I felt a bit like the world was closing in. The air seemed thinner and the room much smaller. Had I misheard the doctor?

“Can you repeat that please?”

It was March 2018, I had been struggling with stomach issues for over a decade and had always been told it was IBS and that no treatment was available. I had been desperate for a different diagnosis, one that meant I could be treated and start living normally again. I was a working mum with two young boys and felt like I was at breaking point. A diagnosis, of anything other than IBS, had been what I was hoping for, but…

“It’s definitely Crohn’s,” he repeated, interrupting my fast-flowing thoughts. “We need to start with an aggressive treatment plan. A move to a liquid diet, a course of steroids and we’ll book in regular colonoscopies. Let’s do a gastroscopy and CT scan too and full bloods. We need to be thorough.”

I could feel my heart beating in my chest and wondered if he could hear it. Most of these words meant nothing to me, though they would quickly become vastly overused elements of my vocabulary.

He was one of those very intellectual-sounding doctors whose bedside manner left a lot to be desired. He was delivering this news as if he was telling a child to do their homework – he knew it wasn’t great but, well, this is how it is. I was at the appointment alone and quickly tried to wipe away the seemingly endless stream of warm tears trickling down my face. I’m not sure he even noticed.

“This is of course a life-changing and lifelong condition. You’ll get to know the IBD nurses well, you’ll have a dietician and we’ll keep an eye on you with regular blood tests. You must NEVER miss an appointment.”

He then proceeded to give me cards with direct numbers, recommended charities, helplines and an information pack. I still hoped it had all been a mistake and imagined having to give it all back. That was going to be embarrassing.

I had never met anyone with a disability during my childhood. When I spotted someone in a wheelchair in a big supermarket, or at church, I would avoid looking them in the eye, feeling awkward. Pretending to stare at various milk cartons whilst they passed. Fixating on anything else that stopped me feeling so awkward and unprepared. Growing up in a small town, diversity was limited. My primary school consisted of white, able-bodied, working-class kids. Kids like me. I can’t remember a single child at my primary school who had a visible disability, though I now know that not all disabilities are visible. At high school, it was the same, other than one boy who had Down Syndrome. I was uneducated about disability and at this time the curriculum around diversity was practically nonexistent in my little Catholic school.

At age 23, I found myself standing on the front steps of a pretty, white bungalow. The front garden was well kept and surrounded by colourful flowers. I knocked tentatively. I needed to find a job, I had an 8-month-old son so anything more than part-time seemed too much. The house was a short distance from my own, essential as I didn’t drive then. Was this the perfect position for me? I had applied as a carer for a little girl who had both hydrocephalus and spina bifida; she was ten and had been in a wheelchair her whole life. Butterflies flooded my chest and I was concerned by the speed of my heart rate. I had never attended an interview at somebody’s home before. Imposter syndrome crept into my thoughts, could I even do this? Would the girl be there? Would she be able to talk to me? How would I talk to her? The door was opened by a man wearing glasses, in his thirties with a warm and welcoming smile. He shook my hand and invited me in.

After an interview with their parents, they called Elena and her sister, Lucia, into the room. I stiffened with nerves as I heard the sound of her wheelchair moving along their shiny, wooden hall floor towards the living room. Elena had brown hair, beautiful cheekbones and was wearing a Disney t-shirt and long black skirt covering her legs, she looked me straight in the eye and gave me the huge warm smile that I had seen in her dad, I exhaled. I stood up to say hello to them both and then, feeling silly, immediately sat down. When standing up, I towered over Elena in her wheelchair and her 7-year-old sister, I didn’t want to seem overbearing

“Hi,” said Elena. She was a confident 10-year-old who seemed so much more grown-up than I had envisaged. She began chatting, hardly pausing for breath. She was funny and honest, very honest, which made her all the more endearing. Within a minute of talking to her, I was no longer conscious of her wheelchair. Lucia squeezed in next to me on the couch and smiled. She was much shyer than her big sister. I felt so comfortable with this family, in their home, I suddenly realised how much I wanted this job. Thankfully, I was lucky enough to be offered the position.

Elena was bright, funny, articulate, and determined not to let her physical disabilities restrict her. As a teenager, she volunteered with kids who had disabilities and played wheelchair basketball, whilst studying for GCSEs and A levels. She now has a university degree and is in a happy, long-term relationship. She was raised by an incredible family who taught her that she could do anything anyone else could, there may just be some adjustments to ensure the accessibility of certain activities. I always remember her dad doing a risk assessment of a mountain before she was due to go with school, so that he could pick her up at certain points but so that she was also very much part of the group.

After my experiences with Elena, I felt more confident about disabilities in general. I had qualified as a teacher and was especially drawn to the children in my care who had special educational needs, particularly those with autism. I thought I understood, that I could truly empathise.

Twelve years later and here I was, in a gastroenterologist’s office. Feeling helpless, less than, scared.  I could have huge love and respect for people with disabilities, but I had no idea how it felt to be one of them, until now.

The doctor was still talking to me in a language of unfamiliar medical jargon. And even the words I could understand, I struggled to take in. I remember him telling me of my ‘significantly increased cancer risk.’ He was saying things like ‘calprotectin,’ ‘inflammation markers’ and ‘autoimmune disease.’

“Your life will change from now, but we can stay on top of this if you work with us.” Some reassurance then, finally.  I wished my husband was there, or my mum. Someone to tell me that it was all going to be fine.

“You can’t ignore this,” he said with a serious tone, interrupting my thoughts..

He was right, things did change. The liquid diet was tough- not eating was much more socially excluding than I had imagined. Despite the lack of food, I gained 2 stone, losing more confidence than I ever knew I had. It was hard to sit at our dining room table whilst the rest of the family ate and I slowly drank my tiny bottle of Ensure milkshake. Always smiling so the children didn’t realise I was struggling.

The steroids caused sleep problems, high blood pressure and chest pain. The physical symptoms of Crohn’s gave me social anxiety, leaving the house was more stressful than it was worth most of the time. I was regularly at the hospital, sometimes several times a week. My life had seemingly changed overnight and the simplest things that I’d taken for granted, were taken away.

Over the following years, different aspects of my health were also affected. Arthritis, a complication of Crohn’s, caused a gap in the back of my knee that allowed a huge cyst to grow. The cyst caused severe pain, falls, mobility issues and eventually nerve damage that is most likely permanent. After a particularly stressful period in a job, whilst my Crohn’s was flaring, I began to suffer with panic attacks and night terrors, which, true to their name, are completely terrifying.

There are mornings I look in the mirror and grimace- swollen body, huge black bags under my eyes and a puffy face. I’m 37 but can feel much older. Some of my current symptoms include anaemia, nerve damage, night terrors, anxiety, chronic pain and fatigue. It can feel overwhelming at times, Crohns has brought with it a host of additional issues that are also invisible to the people around me. I’m not paralysed, I have no genetic condition, I can move and think, I can see and hear, and I am grateful for those things. I am blessed in so many ways and am still the same person I was before, perhaps even a little stronger.

So, what is a disability? Is it an inability to walk, or to walk without pain? Is it an inability to leave the house, or leaving the house but having a panic attack in the car? Is it a life-threatening disease like cancer, or a chronic condition that causes pain, embarrassment, discomfort, and fatigue? I have a disabled parking badge. When I am in a lot of pain, I choose to use it. I can feel people’s eyes on me as I get out of my car, their judgement. They do not see the leg support beneath my boots. “You are not disabled,” I imagine them thinking. “Where is your wheelchair?”

Elena once said to me, during one of our more serious chats, “Everyone sees the wheelchair, but it is not that we worry about. It is the hydrocephalus, the anxiety, the stuff that is inside that nobody sees that is dangerous and causes the worst symptoms.” She was right.

To look at me, standing still, or walking on a good day, other than a slight limp – I look ‘fine’. I smile and laugh. I pick my son up from school, I study, I volunteer. I organise parties and birthday surprises and holidays. There are other days though. There are days when I cannot be more than a few feet from a bathroom. When rolling around my bed in agony is something that I cannot control. When I fall in car parks, at work or at home and feel so vulnerable that it scares me. There are days when my anxiety is so high that I am unable to answer my phone no matter who is ringing- I just stare at it with my heart beating out of my chest, trying to catch my breath and incorporate the breathing techniques my counsellor taught me. There are nights when I can feel something pushing down on my chest, hard, but I am paralysed- I cannot even open my eyes.

In which case, they will not see me anyway.