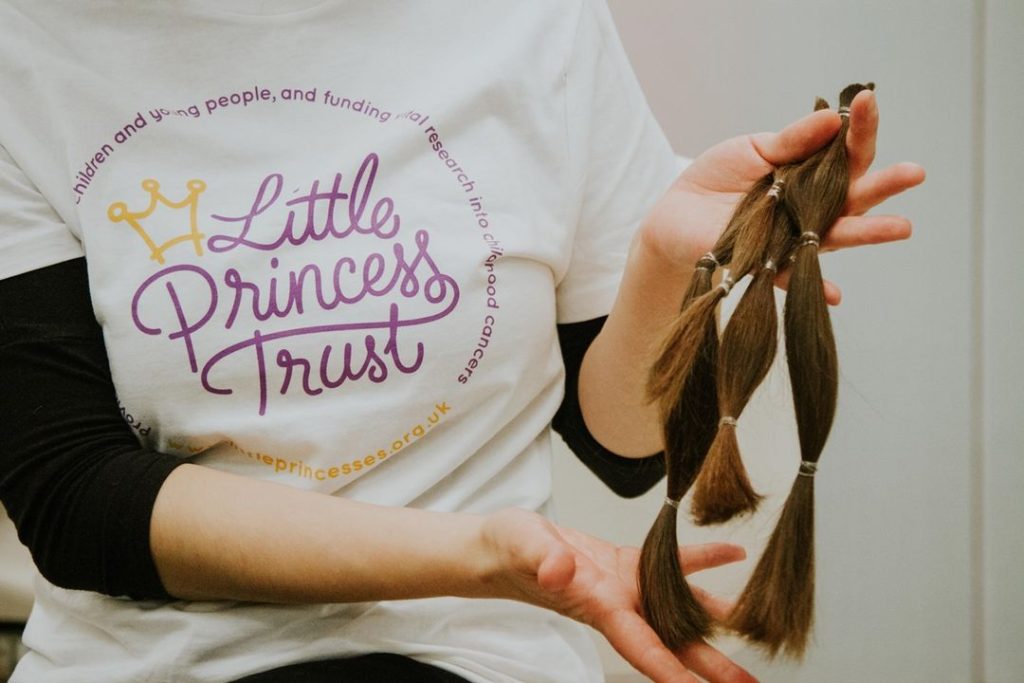 Photographs provided by The Little Princess Trust and Anna Mudeka

Since 2006, Little Princess Trust has supported children and young people (up to age 24) who have lost their hair through cancer treatment or other medical conditions (such as alopecia). They provide real hair wigs, completely free of charge, to help children in dealing with the devastating effects of hair loss.

Using a national network of salons, any young person can have a personalised wig fitted at a local participating salon. The salons start by matching the colour of the hair as closely as possible to the recipient’s natural hair, which can then be styled in any way the recipient chooses.

In the past, it was thought that afro hair was too delicate to create wigs from. Although the trust has always offered ‘afro style’ wigs, this was using dark straight hair which was then curled or treated to recreate the hair type that was requested.

In April 2021, Little Princess Trust had ‘breakthrough’ success with trials, thanks to young hair donor Carly Gorton, and the charity’s ambassadors, Cynthia Stroud and Raoul Wigmaker’s in London. This means that LPT can accept hair donations from black and mixed-race people, which can then be made into wigs for the young people who request these types of wigs.

Carly, who is mixed race, had wanted to donate her hair to the charity but found she was unable to due to the difficulties of making Afro hair wigs. So she helped the LPT to campaign and increase awareness about this issue. 10-year-old Carly took part in a number of interviews with the media on behalf of the LPT. This led to the involvement of Cynthia Stroud, whose son (who is also mixed race) had also previously tried to donate his hair but wasn’t able to.

Cynthia, an entrepreneur, managed to create a wig at home after what she described to the LPT as ‘considerable trial and error.’ Cynthia was invited to join the charity as an ambassador and support them in moving towards the creation of afro wigs from real afro hair donations. Finally, Liz Finan, from Raoul Wigmaker’s, who has worked with LPT for years, began working on the trials to ensure this form of wig making could be recreated for the charity.

Carly told aAh!Magazine: “I was really glad to be part of such a big thing and preventing it [children who are unable to donate or receive these wigs] from happening to anyone else.”

The two wigs pictured are the first two created in the trials at Raoul’s. To create the shorter wig, the team hand-knotted donations. For the longer style wig, they used a combination of ‘wefts and knotting’ of the donations into the lace at the top of the wig cap.

Since 2016, the charity has also begun to fund organisations and academies that are conducting research into less aggressive forms of treatment for paediatric cancers, providing £12 million to date. They have also donated over 8000 wigs to children and young people across the UK.

Little Princess Trust’s Chief Executive, Phil Brace, said: “The commitment and work that has gone on has shown just what is possible when groups of people get together and bring different skills to find a solution.

“We are so grateful to all those who have worked on the project to offer even greater choice to our beneficiaries, as well as being truly inclusive to our donors. Whilst we have always offered Afro style and curly wigs, the new knotting process allows greater choice.”

With Covid-19 restrictions being lifted, Little Princess Trust can now accept donations (of all hair types) again. To find out more about donating hair to support children and young people with hair loss through illness, please visit: