You are here: Home / Art / Interview / Stephen Carley: “The pandemic has really changed my trajectory, to say the least” 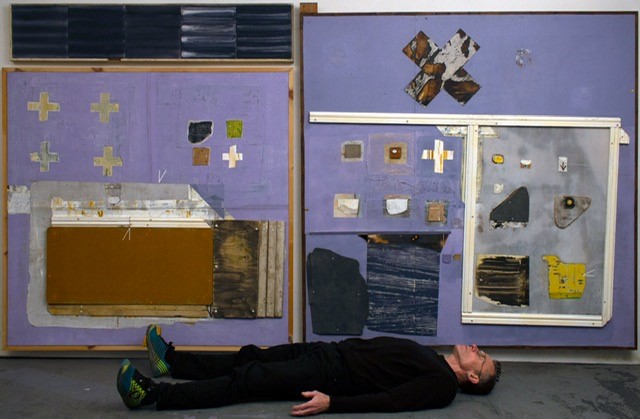 Stephen Carley has just finished his best painting to date. That, or he’s just relieved to have it done, he suggests candidly, as the considerable 8 x 11ft piece took seven laborious weeks to complete.

“I think with a lot of artists, the last thing you’ve done is always at the forefront. It kind of supersedes everything else,” he says.

Situated – yet to be titled – on the wall of the award-winning mix-media artist’s Sheffield studio, the painting is an ‘anti-clockwise landscape’ set across four panels. The subdued hue of the pale violet is far removed from the lucent cadmium yellow of his pre-pandemic pieces. Not one to suffer from the disposition of existential crises, even Stephen has seen the uncertainty surrounding Covid-19 seep into his creative process.

“Because I paint and draw in a way which is relatively non-figurative, I think things have got very ordered and calm in the composition.” He speaks gently but decidedly, considering his words in such a way you’d trust they only carried opinions in which he wholeheartedly believed. “As an artist, the overwhelming sense of anxiety that’s in society has rubbed off and I’ve absorbed it.”

“Before, I might’ve been more prone to having things with diagonals or very strong bright colours, but now shades like ‘paynes grey’ and ‘pale violet’ have become very dominant. They’re beautiful, but they’re sombre and moody as well”. Stephen draws comparisons between the pandemic and his experience of the second Cold War during the 1980s, noting a similar feeling of “existential crisis that’s looming above”.

Stephen is sitting in his study – or what you’d presume it to be from the other side of a Zoom call. He’s dressed in an understated black t-shirt, sporting thin round spectacles and a lockdown-induced mohawk haircut. Behind him towers an enormous white shelving unit housing an extensive collection of vinyl records; emulating the imposing scale of one of his immense multi-media paintings.

A career spanning four decades, his work has been widely exhibited, and he recently won two prestigious prizes with the Royal Scottish Academy and the illustrious London Group of which he is now a member, with previous alumni boasting the likes of Frank Auerbach, Henry Moore and David Hockney. His paintings often include a multitude of media not limited to the conventional paint box, featuring debris such as old scraps of wood and even dust from a hoover bag.

Previous projects of his have involved celebrated collaborations, most notably with curator Andrea Hadley Johnson and artist Anna Mawby on ‘Can You Hear Me Now‘ which took over two years to create.

Despite the turbulence of the pandemic however, his obsession with landscapes remains unchanged, this long-standing fascination firmly rooted in his rural Lincolnshire upbringing. With his father in the RAF, Stephen summarises his ‘typical’ 1970s childhood as simply “aeroplanes and potatoes”, whilst onlooking the emerging scene of glam rock.

It was a school trip to the Tate Britain aged 17, in which he first encountered the great American abstract expressionist works of Robert Motherwell, Jackson Pollock and Helen Frankenthaler, where his perception of art immediately changed. “I just sat in the middle of that gallery floor and I burst into tears, I couldn’t comprehend it. But I also knew at that moment that it was exactly what I wanted to do.”

Still heavily influenced by scale, Stephen also finds inspiration within the pages of Kurt Vonnegut, J.G Ballard and, in particular, Italo Calvino’s ‘Invisible Cities‘ – “It’s kind of like my bible.” He views drawing as a communication tool comparable to writing, in which the immediacy of making a mark appeals to him.

However, despite the organic development of Stephen’s work during these past nine months, he feels let down by the lack of understanding and support for the arts industry shown by the government. “I can’t work out who’s the sh*ttest,” Stephen declares with comical, yet genuine confliction. “There are so many characters in this tragedy of a play that’s unfolding in front of us. Shakespeare would’ve loved this.”

As both a practicing artist and a teacher – actively encouraging children to pursue creative careers – Rishi Sunak’s recent comments hit home on a number of levels, after it was ‘advised’ that those in the art industries should consider retraining.

“I’m quite lucky because as a teacher I get my salary, and so as an artist I’ve never had to worry about making money. But I know people who aren’t in that position; they’ve got these incredible skills and they’ve trained for years, so it’s hugely insulting.”

Despite this knock from the Chancellor, it’s set to be an exciting couple of years ahead for Stephen, with exhibitions taking place in Sheffield, Manchester, the Royal West of England Academy, the Royal Scottish Academy and The London Group throughout 2021 and 2022.

“To be honest, I just want to keep working. Keep making the paintings, keep doing the drawings, keep taking the photographs. Covid’s not going to stop me – there are some very definite plans in place.”