You are here: Home / Culture / Interview / Music / “Light and shade”, as Jimmy Page would put it: Australian Post-Punk Band ‘The Nagging Doubts’ on Their Sound, Treasured Vinyls, and Pharmaceutical Advertisements 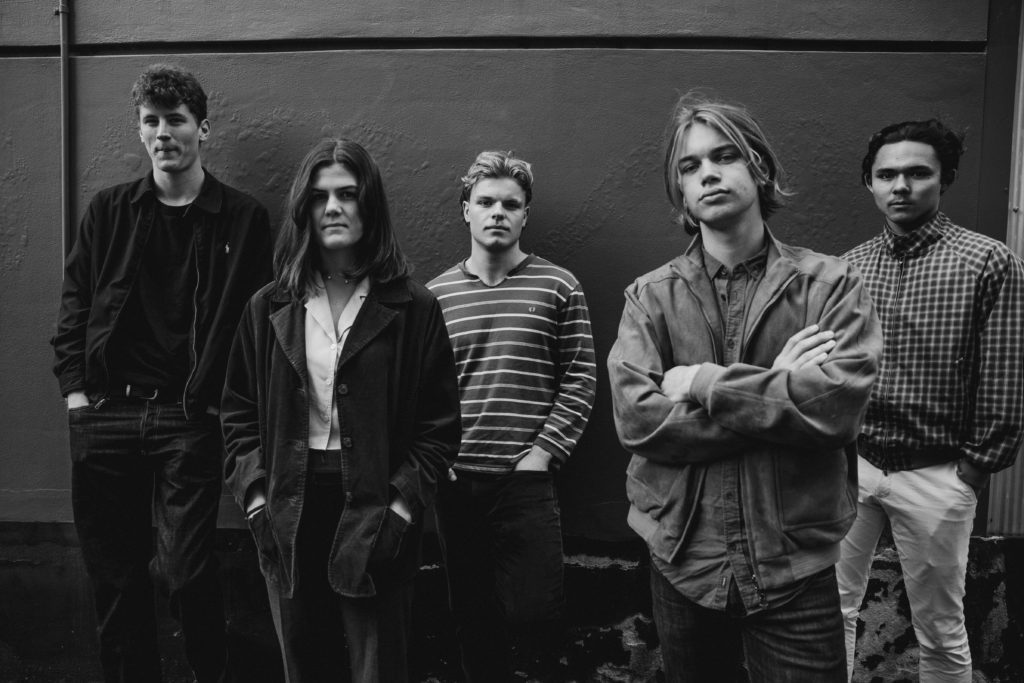 Imagine a melting pot of 80s alternative music scene and past cultural figures, from Andy Warhol to Velvet Underground and Joy Division, as well as something which you can’t quite place your finger on. If you manage to picture this, you may almost come close to figuring out the enigma that is emerging post-punk outfit, The Nagging Doubts.

Since their first EP, Deug Lane, released in 2019 while still at high school in Sydney, they’ve become known for defying-genres left, right, and centre – expertly blending notions of glittering shoe-gaze and gritty post-punk with fluorescent psychedelia.

They’ve been successfully infiltrating the radio waves from the land down under to London and beyond. One of their latest tracks ‘Berlin’, was released as part of an a-side and received radio play by stations such as BBC Radio Ulster and Radio X. Along with ‘Marine’, it acts as an introduction to their forthcoming EP, Autocalm, which explores themes such as anxiety, ecstasy, disillusionment, and fulfillment. Despite finding inspiration in 1960s pharmaceutical advertisements and records of the past, it is a response to the issues present in our society today.

aAh! Magazine caught up with the band over email to discuss the creative process behind Autocalm, their favourite lyrics that they’ve written, and what message they hope to give to others through their music.

How did you settle on the name, ‘The Nagging Doubts’?

“Pretty simple answer here. Joe [Wilks]’ dad has an ever-growing list of great band names. We owe ‘The Nagging Doubts’ to him. We also feel it holds a certain timelessness – everyone has their nagging doubts, and everyone always will.”

Your sound appears to draw on a range of influences, from shoegaze and post-punk to psychedelia. Being a five-piece, does your music tastes ever clash?

“‘Clash’; might be the wrong word. Everybody brings a different flavor to the table. We have a lot of fun in naturally blending our different influences and styles. We feel it gives our music a certain uniquity and heterogeneity.”

What is your creative process, and has it changed since you started making music together?

“Our creative process has stayed generally consistent over the course of the band’s existence. Someone brings a song idea to the group and we all work on it together. More often than not the song comes out different from what it was originally intended to sound like. Technically though, we’ve gotten better at recording demos and articulating ideas to one another, which can be harder than you think. It’s definitely a group experience. Someone always has a personal story behind each song, but as a band, everyone helps to bring that story to life.”

The title of your forthcoming EP, Autocalm, was inspired by 1960s advertisements for pharmaceuticals. What was the thought process behind this EP, in particular?

“The title of the EP is actually lifted from a playlist made by Gabe [Jessop-Smith]’s partner. Tom [O’Rourke] loved the wordplay and came up with the 60’s pharma ads idea. It’s a concept of taking a pill for instant tranquility, Brave New World style. Ironically, the EP is definitely not a ‘chill out’ kind of record. It can be a little dystopian at times but uplifting and hopeful at others. ‘Light and shade’, as Jimmy Page would put it.”

Why did you choose to release the forthcoming tracks from Autocalm, ‘Berlin’ and ‘Marine’ together as a-side, before its release?

“Considering all five members of the band are songwriters, we have a lot of material up our sleeves, and it’s always exciting to put stuff out. We also feel that ‘Marine’ and ‘Berlin’ are a very strong pairing that reflects our diversity, as well as the sounds we’re experimenting with at the moment.”

Your latest single ‘Berlin’ has been gaining radio play in the U.K on BBC Radio Ulster and Radio X. How have you found garnering your success outside of your native country?

“Unprecedented and incredibly exciting. We’re absolutely stoked that people in the UK are playing our music, and to be on Radio Ulster and Radio X is crazy.”

You have recently played a live gig at Waywards. What was it like getting back on stage again, and how did you find the live reaction to your new tracks?

“We have a tight-knit, dedicated fanbase who turn up to every gig. That encourages us to work hard at making every show exciting for them, as well as anyone else who turns up. We’ve been working really hard over the past several months, and it really paid off at the Waywards the other night. We’ve always wanted to play that venue, so it was something of a milestone for us.”

You have said that you were influenced by your “parent’s superb vinyl collection”. Which vinyl albums have inspired you the most?

Do you have any favourite lyrics that you have written?

Joe Wilks: “The second verse of Berlin is about a very intense time living with my best mate Felix in close quarters overseas and breaking some pent-up barriers. I always enjoy singing these lines and it takes me right back to that Porto hostel room where we had one of the warmest and much-needed conversations, we’ve ever had.”

What are your next goals?

“We’re hard at work polishing the EP for next year, so that’s our main focus at the moment.”

Is there a particular message which you would like to give to others through your music?

“We want people to listen to our music and have their own experience with it. When people relate to or are affected by your music, that is the most rewarding thing. If we explained the message or idea of the new songs, we’d be ‘explaining the punchline’, or telling somebody what the song is about, rather than allowing them to create a subjective interpretation. Ultimately though, a lot of inspiration comes from human nature and one’s everyday experiences, including relationships, love, loss, hope, and beauty.”

Finally, is there anything which you have never been asked but wish that you had?

“Yes, it would sound something like ‘would you like to come over and tour in the UK?’”

Their latest release ‘Berlin/Maine’, is out now and available to stream here. Make sure to keep an eye out for their forthcoming EP, Autocalm, set to be released early next year.

Keep up with The Nagging Doubts: