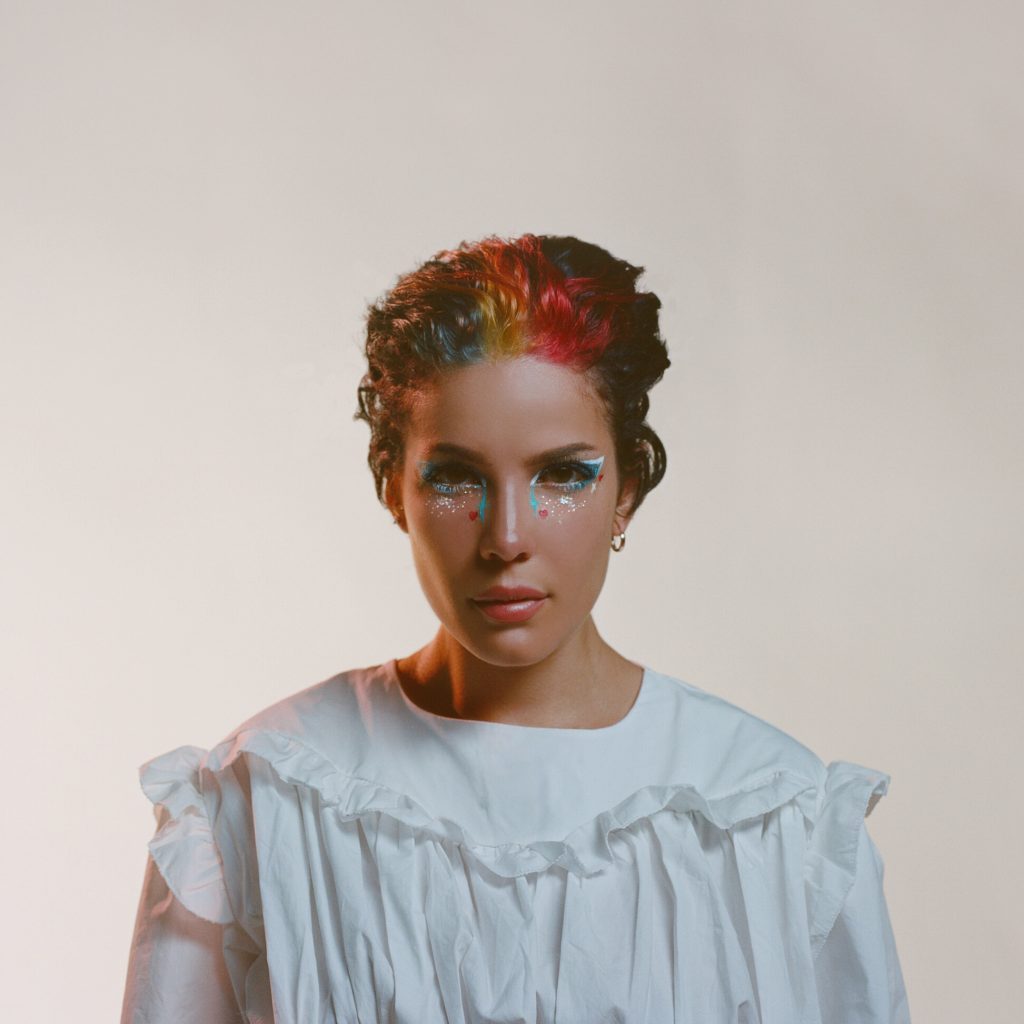 As commented by Halsey, it had been a long time since she’d played a show in Manchester, with once “only around 50 people present”. It was to be a show where we’d “laugh, cry, get mad and leave a piece of ourselves which we perhaps didn’t like on the floor behind us”. A lot to accomplish in one night as she officially welcomed us to the last night of ‘The Manic Tour’. Her much-needed hiatus would be swiftly following this concert, after touring non-stop for six years. It was also to be the last gig of any kind for a while, due to the ongoing Coronavirus outbreak. However, armed with Manchester-based outfit Pale Waves, Halsey was going to make sure that she would not be quickly forgotten during her absence.

A goth-pop-indie band hallmarked by midnight hues and fishnets, Pale Waves have a talent for aesthetics – overshadowed only by their ability to create a catchy anthem. They sadly underwent a bus crash earlier in the tour and took some much needed time off. However, they were back and better than ever to finish off their shows with Halsey. The four-piece consists of Heather Baron-Gracie on vocals and guitar, drummer Ciara Doran, guitarist Hugo Silvani and bassist Charlie Wood. The opening track, synth-fuelled ‘Eighteen’ automatically saw the crowd vibing to the beat. Their set featured a simple set up with a white and red colour palette and a monochromatic background with ‘Pale Waves’ outlined across, leaving their music at the centre of attention.

‘Television Romance’ proved Baron-Gracie’s vocals and the whole band were commanding their stage. As Baron-Gracie announced: “It’s nice to be home, the world might be falling to pieces, but at least we have a night. Next one is a gay song for all you gays out there.” There might have been a growing global pandemic but the self-proclaimed gay anthem ‘Red’ along with their set, was a welcome distraction.

The emotionally-charged serenade continued with a song declared by Baron-Gracie to be “for all you emos out there, this is ‘My Obsession.’” It was a slower number, dripping with synth. With beautiful lyrics such as “You’ll always be my favourite obsession” and “I swear I’ll never stop loving you”, it follows Pale Waves knack for penning enchanting lyrics alongside catchy instrumentals. Next track ‘Noises’ was announced by Baron-Gracie as about “hating [herself].” The performance feels even more real when you see an artist ripping their heart out in front of thousands of fans. All the crowd were waving to the melody and the band had great chemistry on stage together.

Before they could finish with the classic-indie track ‘There’s A Honey’, Baron-Gracie announced that “Manchester is very important to us as it’s where we started and will always be special to us.” Finishing in their hometown made their performance even more special. Every audience member was waving their phone lights, to light up their successful homecoming show. It ended with Baron-Gracie lifting her guitar above her head, having done themselves and their city proud.

Halsey is an artist which similarly to Pale Waves, has never shied away from revealing her deepest emotions through her music. A 24 track set from Halsey ensured everyone present was getting their money’s worth. From the 25-year-old’s Badlands’ release in 2015 to recent release from earlier this year Manic, and not forgetting 2017’s Hopeless Fountain Kingdom – Each prospective album had tracks featured in the set and acted as a form of time-travel as we made our way from 2015 to the present.

Only Halsey could blast into a show with flames from the offset with hard-hitting track ‘Nightmare’, as she shouted: “So save me you f***ing prayers”. Various pyrotechnics also became a corner-stone of her show. Many of her songs and most aptly ‘Gasoline’ saw a large use of flames, to add to the dramatic effects of the show. The visuals were stunning throughout the set, but especially for ‘Colors,’ which had coloured scribbles in the background, and ended with a blast of confetti. Her boundless energy left little need for pyrotechnics, but similarly to her created stage name, everything about a Halsey show is centred on performance. She gives every show everything she’s got and expects the same from her audience. She even stopped mid-way through ‘Castle’ and reminded the crowd they were in Manchester and how it was supposed to be the craziest night of the tour. Her vocals were at the centre of the show, as she powerfully sang the lyrics – doing her self-proclaimed “angry, female pop record” justice. A theme just as important now as represented by ‘Nightmare’ as when she first burst onto the scene.

Costume changes are the hallmark of any true person running a show. The tongue-in-cheek track ‘I Hate Everybody’ welcomed the appearance of a multi-coloured tie-die catsuit, with blue lights almost around her like a cage and ode to broken relationships, ‘Bad at Love’ saw Halsey re-enter in a white suit with a silver harness. As she sang ‘Heaven In Hiding’ posing while singing “I can put on a show”, it was already apparent – along with her announcement in flame accompanied track ‘Die For Me’ how everyone shouted, “I sold 15 million copies of a break-up note”. Moody pop is not the only genre in her forte. Followed by ‘You Should Be Sad’ a country stylised track from Manic, which saw Halsey sporting a black fedora.

A special song which was “the only real love song” she’s ever written because she’s “a cynical person”, was dedicated to someone from Doncaster. This could only be about her former flame Dominic Harrison a.k.a Yungblud. The track ‘Finally // Beautiful Stranger’ saw an acoustic guitar and audience phone lights lighting up the arena like stars. It displayed a softer side of Halsey, which she doesn’t often show and was even more special. Halsey went on to explain how she had been at Manchester airport a year and a half ago, and it seems to have come full circle. It was interesting to remember how songs evolve over time.

‘100 Letters’ followed within a similar vein, with a raw and emotional piano on a platform, while Halsey stood on one too. All the crowd were waving their phone lights for this slow number again, as Halsey sang “I can’t stop wishing I never gave you everything”. It was just as intense as her high-powered numbers. Her favourite part of the set is when we think it’s all “slow and peaceful” but she announced the slower break wasn’t for her. It was for us “to catch our breath” as she was going to ramp up the energy again.

Throughout the show, it was obvious the strong connection Halsey has with her fans. Earlier, she had stated that while writing Badlands she said how she “didn’t know what it was like to play a show to her fans”. However, when touring she realised how different her fans were “so f***ing weird” like her. Even dedicating the recent track ‘Clementine’ as “for the fans”. During ‘Is There Somewhere’ from her Room 93 EP, which was written when she was 19, she asked: “Do you know this last part?” and as she extended an arm to the crowd while perching on the barrier, they surged forward to share this moment with their idol.

She also took the chance to introduce us to her band and crew on this last night including her drummer Nate, who had accompanied her on the road for five years, multi-instrumentalist Brett and her guitarist Ariana and all revealed what they’d be doing on her hiatus. From running America to playing video games, it added to night’s theme of nostalgia.

Before ‘Graveyard’ she stated it was important to partake in the new tradition of getting on our friends’ shoulders. The track saw Halsey singing while bending backwards and with flames either side of her, as she impressively held the note at the end. Before the guaranteed encore, ‘929’ was a story from Halsey to the fans, which further tailored the night to Manchester by the ‘girl with pink hair’ in the track, hailing from there instead of Detroit as any fan knows.

Bring Me The Horizon produced track ‘Experiment On Me’ from film ‘Birds of Prey’, showed Halsey’s experimentation with ‘Nu-Metal’ genres, previously demonstrated in ‘Nightmare’. A confessed “emo since the dawn of time”, the collaboration wasn’t a surprise and translated well to the live stage. Barefoot, wearing a simple crop top and jeans while suspended on a platform attached to a rope- she demanded the crowd to “start a pit now, else I’ll stop this song”. They willingly obliged for her heaviest song of the set, the red lights undercut with flames setting the tone for the intense track.

Before Halsey could love us and leave us with chart-topping track ‘Without Me’, we were given an insight into her life over the past few years. How there had been times where she’d thought “I can’t” and tried to protect herself and us. However, she said she had a large amount of gratitude for the audience, because of them she “got to watch her brother turn fifteen, have her mum call her every day, and the chance to grow old with a family.” She said she’d never take the second chance which her fans had given her for granted. However, we can be sure that this relationship works both ways, and we would never metaphorically be without her.