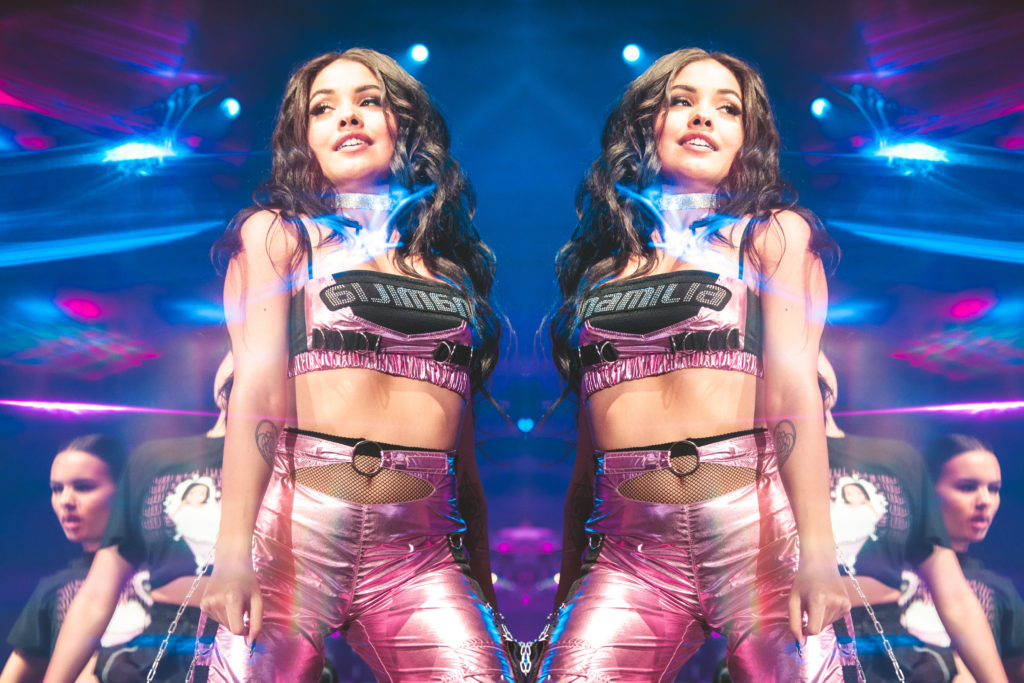 Thousands of neon-clad fans snaked all the way up to the Old Trafford stadium, in line to see the music sensation Mabel. Undeterred by the cold weather, fans were dressed up in Mabel’s iconic outfits, including oversized vibrant tees and Lycra cycling shorts.

The O2 Victoria Warehouse was sold out, and it filled up quickly, fans of all ages were boogying to the old school RnB tracks that the DJ was blasting throughout.

The bright lights from the stage flashed at the crowd, then out came Kali Claire, ready to warm up the audience before the main act. Kali belted songs from her EP, especially showcasing her new song ‘Easy’. After thanking Mabel for giving her the opportunity to tour with her, and then praising the audience for their support, she went on to cover Ariana Grande’s song ‘One Last Time’, as a tribute to Manchester after the Arena bombing of 2017. Kali Claire held the crowd immaculately and is an artist to keep your eyes on – she has a real talent for RnB and soul.

A short while after, Mabel entered onstage to a roaring audience chanting her name. She was wearing pink sparkly pants with a little crop top, and her long dark crimped hair was down to her waist; she looked like a character that had come straight out of 90s chick flick.

Mabel opened with ‘Mad Love’. As the tour was for her new album, High Expectations, songs from it were the most common in Mabel’s set, however, she dotted her older songs in between and it was these songs that were more popular with the audience. ‘Finders Keepers’ was especially a hit.

Four dancers were up onstage with Mabel, who were performing upbeat dance routines around the singer, which really added to the party atmosphere of the gig. Mabel also showed off her dancing skills in an interlude dance, backed by a pre-recorded cover of ‘Say My Name’ by Destiny’s Child. The stage was lit in a moody purple, whilst Mabel and her four dancers performed a sultry dance, using chairs as props.

After she sang her recent dance hit, ‘God is a Dancer’, Mabel told the crowd that she needed to go home and thanked them for coming. She then left the stage and the lights dimmed. Suddenly, the sound of a telephone being dialled filled the warehouse and everyone began to cheer – they knew what was coming. Out came Mabel, ready to sing one of her smash hits, ‘Ring Ring’.

To end her encore, Mabel sang ‘Don’t Call Me Up’ which was in the 2019 UK charts. It was the best song for her to finish on as everyone was singing, even those who were at the back of the venue and had seemed quite timid throughout the gig were mouthing the words.

Overall Mabel was a massive hit. It was an enjoyable night for everyone there and the mood carried out onto the streets as the neon crowd paraded down the road and sang together into the night.