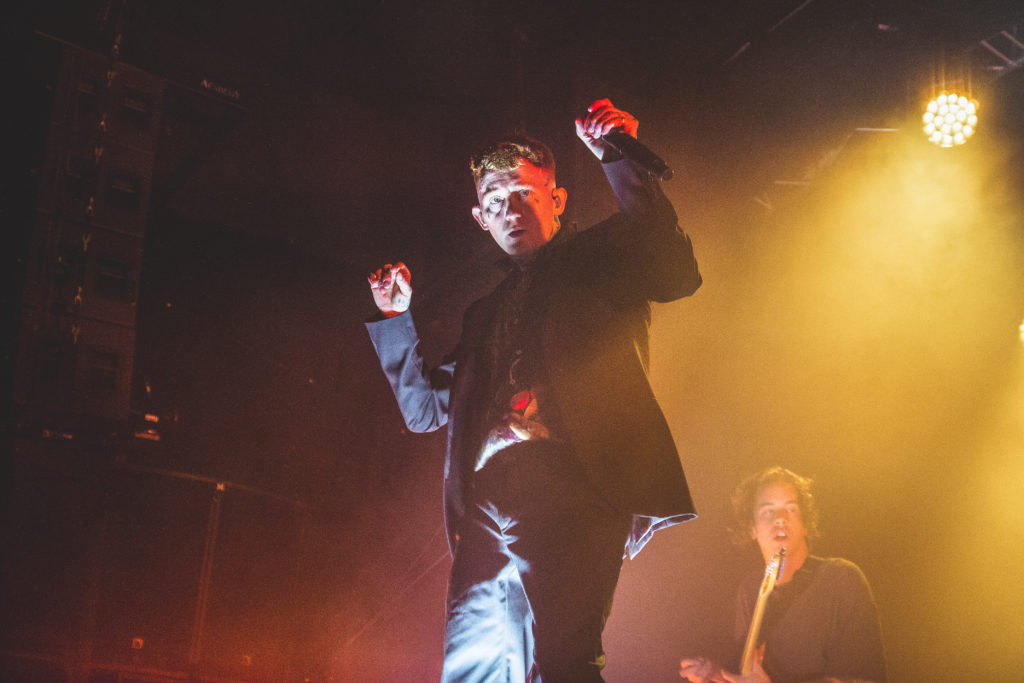 5 years ago Frank Carter & The Rattlesnakes were stage-diving off the window sill at the Star & Garter, which boasts a 200-person capacity. This time their show was sold out once again, except they had ten times the fans at Manchester’s Academy 1. They brought their much-loved anthems back to the city where they first cut their teeth alongside Canadian rock-duo Cleopatrick and American hip-hop/hardcore punk band Ho99o9.

With a mantra of ‘F*** whatever rock is’, Cleopatrick are intent on paving their way in the music industry, although it’s only Luke Gruntz (vocals + guitar) and Ian Fraser (drums) carrying the weight of their hard rock ambition. First track ‘Sanjake’, a riff-propelled anthem with thrashing drums, saw the audience bobbing their heads immediately while Gruntz encouraged them to get their hands in the air.

After their third track, the duo clearly wanted more and said to the audience, “What’s up? we’re Cleopatrick from Canada and we’re a long way away from home, wake the f**k up you’re at a Frank Carter show!”. The audience took this on the chin and quickly matched their energy, before the band launched into fan-favourite track ‘Hometown’.

Drums signalled the next sonic attack ‘The Depths’, alongside exhilarating green and pink lights, and guitar riffs which were grating and captivating. Last track ‘Youth’ was a known crowd-pleaser, as they sang the words perfectly back to Gruntz “My youth is gone and I know it/ pushed it too far I’ve outgrown it”.

“What’s up? we’re Cleopatrick from Canada and we’re a long way away from home, wake the f**k up you’re at a Frank Carter show!”.

The track was worth two rounds of applause as it highlighted how well the pair work together on stage. This should be no surprise as they’ve been best friends since they were 4 years old and playing together since they were 8. Big things are coming from this duo, and you should certainly keep them on your radar.

Hellish in the best way, three-piece Ho99o9 which is pronounced ‘horror’, is causing a wicked storm. The affectionately known ‘Dread 1’ is vocalist Eaddy and ‘Dread 2’ on the keys/ vocals is the OGM. They are backed up on drums by Billy Rymer.

Determined not to fit into a single genre, their combination of punk, rap and hip-hop makes them an exciting prospect to see live. Despite not having the warmest welcome on some previous tours such as with rock legends Papa Roach, they were received well with the Frank Carter fanbase.

Their light-hearted intro was deceiving as they stomped into their first track ‘ShadowRUN (Error)’, which also saw the OGM sporting a gas mask, in keeping with the devilish appearance they aimed to create on the night. The pounding drums and their crazy attitude on stage had the audience cheering off the bat.

Track ‘City Rejects’ sees Eaddy jump in on the action with high-powered drums and even managed a tuck jump within the performance, as they sang for “Jesus, anarchy and peace”. Their Penultimate track ‘The Dope Dealerz’ saw Eaddy and the OGM combine forces, both free to roam the stage and orchestrate the spectacle of their unique show.

Before their set could finish the band thanked the crowd for sticking around and the staff, before going into their last track of the night ‘F.O.G (Error).’ They had warmed up the audience well, as they were overhead clapping and ready for Frank Carter to take to the stage.

Nobody can start a show quite like Frank Carter. A dramatic voice boomed around the venue, reminding us to “clear our minds and leave everything behind” as this was an event which would “only happen once”. It was to be a monster of a set, despite being a tour dedicated to their latest album The End of Suffering, they played 19 tracks across their two other previously released albums Blossom and Modern Ruin too.

This meant that no fan-favourite track would be missed. Carter certainly knows how to give the people what they want. Frank Carter & The Rattlesnakes is made up of Tom “Tank” Barclay on bass, Dean Richardson on guitar, Frank Carter on vocals, Russell Elliot on guitar and drummer Gareth Grover.

The set began with ‘Why a Butterfly Can’t Love a Spider’ – the opening track from their latest album The End of Suffering. Illuminated by blue light, the crowd had their arms in the air and were moshing before the first track could finish.

Track ‘Juggernaut’ brought the punk atmosphere from their debut album, a change to the mellowed alt-rock style of their latest album. Carter stood on the barrier holding the audience, radiating energy as the crowd sang back “you can’t tell me I’m on my own”.

With crashing drums and never ending riffs, it was already easy to see this band was comfortable dominating an arena. Before they could launch into the catchy track ‘Wild Flowers’, Carter told the crowd to “open the dance floor” and to “spread out”, as he was going to set a girls-only mosh pit in motion. A safe but energetic show is hard to create, but Carter executed it perfectly. It’s surprising to hear that Carter has “been playing gigs in Manchester for 16 years and has never played a headline as big as [Academy 1].”

With crashing drums and neverending riffs, it was already easy to see this band was comfortable dominating an arena.

The slow and melodic track ‘Love Games’ set the scene for a gentle, slow dance style mosh pit, as Carter instructed the crowd to couple up with an ex, crush, friend or a potential new partner. This track showcased the vocal range of Carter, a true musical chameleon.

It’s always interesting when an artist explains their track before performing it. For ‘Anxiety’, Carter reminded the audience that you can always talk to someone and it will “take the pain and suffering out, and you get kindness. It’s not difficult. You don’t need to suffer in silence or at all”. The audience sang together as Carter ended on the lyrics “we can be happy”.  In a world where the issue of mental health is becoming increasingly prevalent, he is a much-needed figure for our generation.

Carter’s show had all the hallmarks of a true rock show: Richardson crowd surfing off the barrier in ‘Crowbar’, Grover banging sticks together above his head in ‘Renegade’ and Carter orchestrating the chaos while running the show.

In a world where the issue of mental health is becoming increasingly prevalent, [Frank Carter] is a much-needed figure for our generation.

However, he’s anything but the average frontman. Dedicating ‘Lullaby’ to the “smartest, most beautiful woman” – his 5-year-old daughter and thanking everyone in the building for their help, including the bar staff, Carter is ever humble and gracious.

The last song was dedicated to that “special person in your life who you hate more than anyone”. The Carter crowd-favourite ‘I Hate You’ was ended with Carter holding up his branded scarf, Richardson playing the guitar behind his head, and Carter declaring “My name is Frank f***ing Carter”. His full name indeed, to always be remembered.

As Carter noted, “As a rock band it’s difficult to survive without the help of radios and labels”. However, with their fans, it never mattered. Carter’s set was filled with celebrating everything which comes with life, and how with love and happiness we can look past the pain and sadness.

It’s the ‘End of Suffering’ because as long as we are alive, there is always hope. That is the true power of music.