You are here: Home / Music / Live Review: The Mysterines Lead Genre-Bending Night of Indie Rock Rebellion at the Deaf Institute 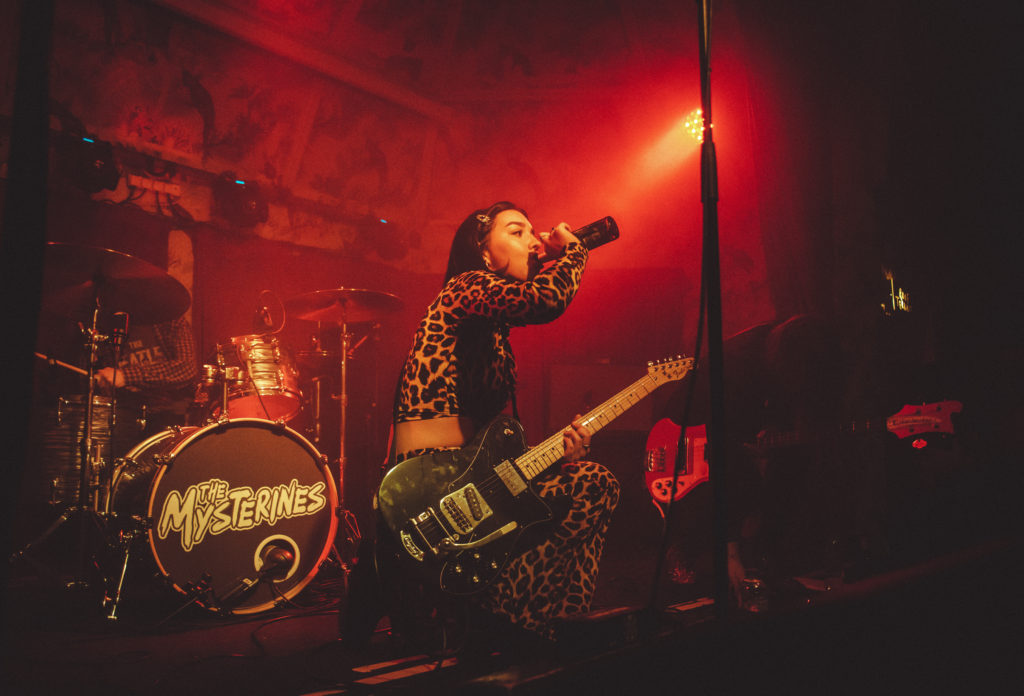 An array of musical styles decorated Manchester’s Deaf Institute last week, in a night featuring The Mysterines, Children of the State and Tom Mouse Smith.

First to take the stage was 15-year-old Tom Smith, who only started singing seven years ago but has since featured on BBC Introducing and opened for Catfish and the Bottlemen.

The one-man show brought an echo of emotion and subtle blues which resonated Lana Del Rey’s iconic ‘lone-ranger’ aesthetic. Rock primarily influenced his music, but the dashes of blues and indie-alternative style were what really brought his music to life.

Red lighting on stage amplified Smith’s heavenly vocals, which he used to create a sense of individualism and momentum through his elongation and emphasis of the lyrics.

In a conversation after his performance, Smith admitted to aAh! Magazine that his singing isn’t as popular as it may seem outside of school. He also said that he was born with a heart condition and a lot of his music tries to bring that story to the stage.

The night was then drawn back to a time where sideburns and flared pants roamed the streets. Children of the State have the new wave vibe that is slowly creeping into Manchester and didn’t fail to impress. The Yorkshire 5-piece have been criticised for their unidentifiable genre but leaned more toward rock with indie overtones on the night.

Their kinetic energy mirrored the music. As lead singer John McCullagh whipped out a harmonica, his quick movements and intense energy caused his comrades to kick their flared pants and leather jackets into the air.

‘I Shiver When I Burn’ was probably the most well-received and recognisable song of the night. It harboured strong Beatles vibes with its dreamy vocals and guitar tones, which added a distinctive mood to each song.

The set was varied, with highs and lows in expression and beat, but each style, including the band’s more mellow rhythms, led to head-banging vibes in the crowd.

The encore of the night was awarded to The Mysterines, who brought a rebellious feeling to their music, reminiscent of a classic road trip around the United States. Their performances included fan-favourites ‘Who’s Ur Girl’, ‘I Win Every Time’, ‘Love’s Not Enough’ and ‘Gasoline’, which all exuded feelings of youth and freedom.

Singer Lia Metcalfe’s vocals have a roaring sensation to them which gives the band a strong ‘umph’ in the alternative genre. Although the Mysterines clearly stand out from other rock bands, they brought key elements to pay homage to rock legends on the night with echoing twangs and stop-and-go crescendos.

Metcalfe’s acoustic solo before the finale transformed the yellow-lit stage into the wild west. ‘Still Call You Home’ had individuality and subtle rebellion all the way through as Metcalf, adorned in a leopard print jumpsuit, strummed away on the transformed barren stage.

The Mysterines had a distinctive rock edge but kept true to their indie upbringings, sharing a true genre-fluid night with the other acts.