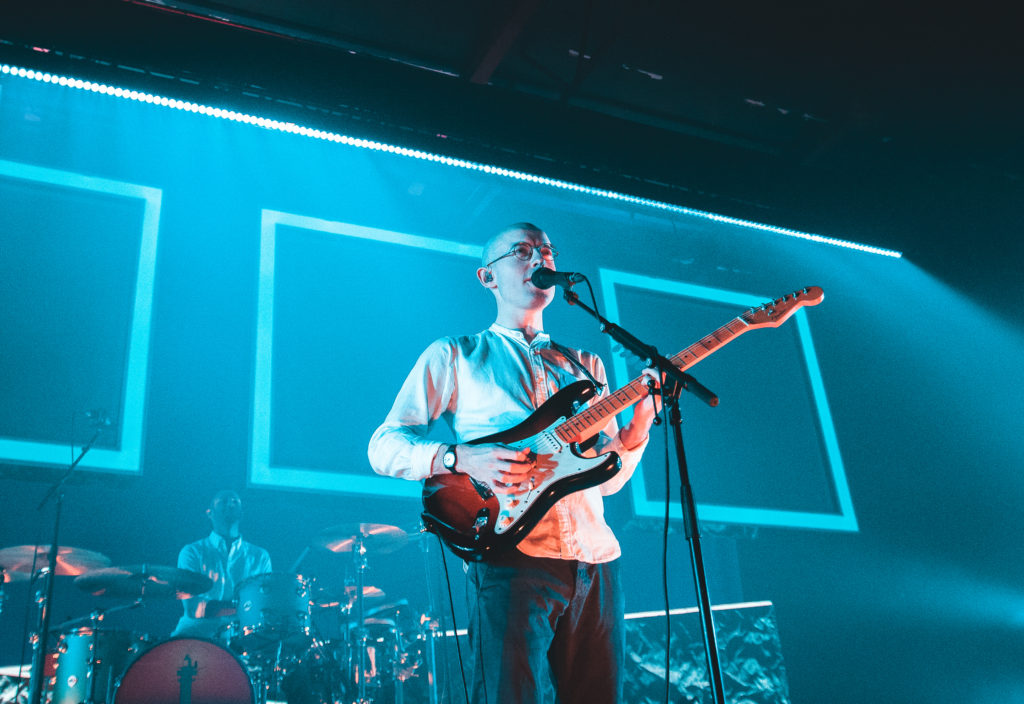 Four years after announcing their hiatus, Bombay Bicycle Club finally returned to Manchester, much to the delight of their fans. Supported by singer-songwriter Liz Lawrence and 90’s alt-rock inspired band The Big Moon, the line-up effortlessly broadcasted a range of what’s possible within the genre of indie.

Not only was first act Liz Lawrence warming up the crowd and opening the show for Bombay, but she also had the added pressure of being their backing vocalist/instrumentalist. However, this clearly wasn’t something that phased her as she provided an almost flawless performance both in her solo set and with the band. Despite only playing a 7 song set, she managed to captivate the audience with her snappy melodies and emotionally driven lyrics.

Next up was London four-piece The Big Moon. They opened their set with their first-ever single ‘Sucker’, and its catchy dual guitar hook quickly got the audience’s attention. A couple of songs in, front-woman Juliette Jackson announced that she was losing her voice and joked about needing help with their next track ‘Cupid’ which some of the crowd were more than happy to provide.

Despite only playing a 7 song set, she managed to captivate the audience with her snappy melodies and emotionally driven lyrics.

The band played a mix of songs from their first and second album, alongside an excellent cover of Fatboy Slim’s ‘Praise You’ which went down a treat. Bassist Celia Archer swapped the bass for keyboard, while Juliette and lead guitarist Soph Nathan jumped around the stage transforming the dance classic into an indie-pop banger.

Soph and Celia also shared singing responsibilities, which made for some beautiful harmonies and drummer Fern Ford even played the trumpet during ‘It’s Easy Then’, which confirmed suspicions that every member of the band is multi-talented.

Last but certainly by no means least, came the main act, Bombay Bicycle Club. There was a clear buzz that could be felt amongst the crowd – an audience full of eager fans waiting for the band’s coveted return.

They began their set with their first comeback single from the latest album Eat, Sleep, Wake (Nothing But You), which was the perfect opener with its catchy melodies and dreamy vocals from frontman Jack Steadman and the band’s backing vocalists. From the very beginning, there was a feeling of pure elation from the crowd; 3,500 people simply buzzing to be witnessing Bombay back in action.

Steadman first addressed the crowd after the second song, another from the new album with ‘Is It Real’: “It usually takes a crowd a couple of songs to get warmed up but not you… It’s so good to be back, we missed you guys”, he said, which was met with a huge cheer.

From the very beginning, there was a feeling of pure elation from the crowd; 3,500 people simply buzzing to be witnessing Bombay back in action.

Whilst playing a couple of songs from their pre-hiatus album So Long, See You Tomorrow, the band welcomed on stage a three-piece horn section for ‘Feel’ which had a distinctly Indian feel. Guitarist Jamie MacColl and bassist Ed Nash’s riffs accompanied the trumpet and sax which made for a perfect feel-good track.

As expected, hearing the first few chords of the band’s older material gained the biggest reaction from the crowd. ‘Your Eyes’ and ‘Lights Out Words Gone’ from 2011 album A Different Kind Of Fix were met with open arms from the audience, most of whom knew every word.

10 years after its first release, the band’s debut I Had The Blues But I Shook Them Loose was celebrated with a succession of songs from the album ‘Cancel On Me’, ‘Lamplight’ and ‘Evening/Morning’. Their classic indie-pop sound mixed with strong feelings of nostalgia had everyone in the room dancing.

“It usually takes a crowd a couple of songs to get warmed up but not you… It’s so good to be back, we missed you guys”

Although the older tracks were the biggest crowd-pleasers, the audience was still more than happy to sing their hearts out to the songs from the band’s newest album Everything Else Has Gone Wrong, which isn’t always the case with a lot of live shows, proving Bombay Bicycle Club have stood the test of time and will always be loved.

Arguably the band’s most famous song, ‘Always Like This’, finished on a huge high. Lead vocalist Jack encouraged the audience to sing along throughout and even stopped himself to let the fans take over. With the trumpet and sax players back on stage, the song featured an extended outro which captivated everyone in the room until the very last note.

In a gig that was more than worth the wait, Steadman mentioned many times how grateful they were that so many people had stuck around. It was amazing to see how much fun the band were having throughout the night, clearly bouncing off each other as well as the crowd’s ecstatic energy and proving that their hiatus hadn’t broken any bonds. It was almost as if they’d never been away.