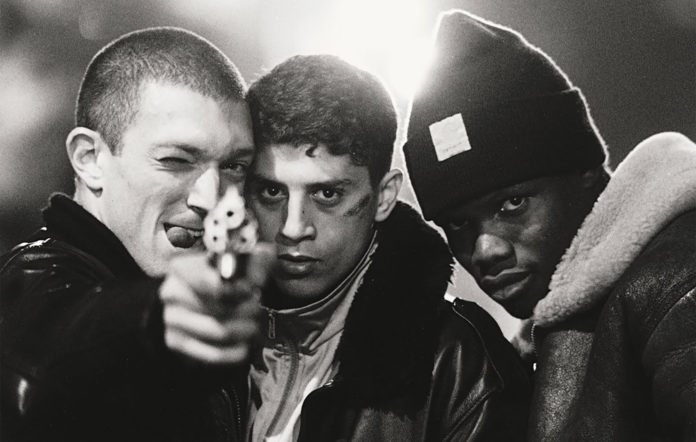 25 years after its original release, it’s clear to see the social relevance of La Haine today. Director Mathui Kassovitz based the plot on the Paris riots which emerged after 16-year-old, Mokome Bowole died in police custody. The film centres itself around three friends Vinz, Said and Hubert after riots break out, following the arrest and hospitalisation of their friend, Abdel. The narrative is set over a 24-hour period, inspired by Spike Lee’s Do the Right Thing, which follows a similar structure.

In one particular scene, where the friends head into Paris to avoid the police who are holding them and others in their community as responsible for the riots, they stumble across an art exhibit. It becomes clear that they do not fit in and are rejected by the Parisian art crowd. In contrast to their friends on the estate where they live, who express their own artistic abilities through street art and dance, the classism within Parisian culture becomes clear.

The racist and fascist nature of the police is further highlighted when Hurbet and Said are taken into police custody. The police put them both in choke holds, throw water over them and joke about killing them. The scene is an intense and uncomfortable watch, highlighting Riz’s white privilege as he escapes the police and sheepishly finds his friends following their ordeal. He can not comprehend the fact that although he is from a working-class background his friends are more vulnerable to police harassment and brutality then he will ever be.

25-years on and police brutality and racial discrimination are just as prevalent in society and have been at the forefront of the media following the murder of George Floyd in the US in May this year. As a result, discussions regarding the defunding of the police and the ways in which racism and microaggressions are constantly prevalent are being created.

La Haine exposes a dark side of both Paris and Europe’s own issues with racism to create a harrowing, suspenseful, and brilliant film. The use of black and white and social realism is somewhat reminiscent of British Director Ken Loach’s work. The use of fast-paced cuts and jarring camera angles add to the tension of the film.

The BFI 4K re-relase of La Haine was shown throughout cinemas during September and October and is also now available on the BFI Payer for those who missed out.