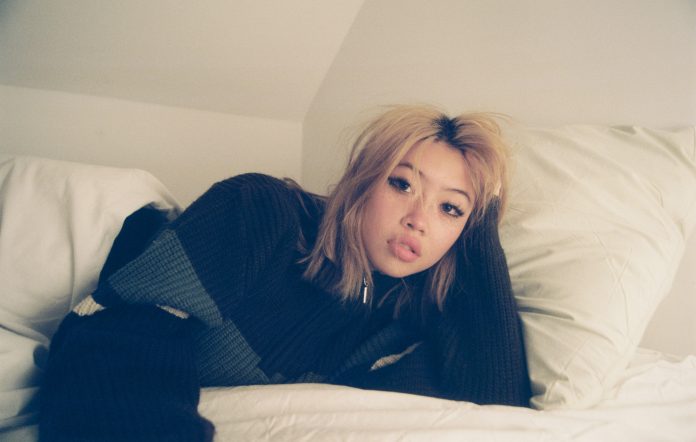 You may recognise the name, Beabadoobee (a.k.a Beatrice Laus) as the artist behind the lo-fi bedroom-pop track, ‘Coffee’ – which has gained over 10 billion listens on TikTok. Her road to success may seem short in comparison to other artists who work for years, never signing to a label or playing arenas – never mind meet their idol. However, Laus isn’t just any other artist. After becoming expelled, her father bought her a guitar and she began making music. Less than a year later she was signed to Dirty Hit – in addition to supporting The 1975 on their arena tour and meeting Pavement’s Stephen Malkmus, her longtime idol and inspiration. However, it hasn’t always been an easy path, and her latest glittery-grunge offering, Fake It Flowers, is an exploration of relationships, navigating both the inevitable pitfalls and pearls of life.

An artist with three successful EPs under her belt and hailed as a voice of ‘Generation Z’, Laus received an accolade of praise from tastemakers, such as Annie Mac before the album was even released. Her debut LP was always going to be one of considerable magnitude. Working with producer Pete Robertson (The Vaccines), undeniably helped to polish the album, however, it’s Laus’ experiences and relationships which drive it. Born in the Philippines and raised in London, we are shown the world through her eyes as a 20-Year-Old woman navigating the world.

Off the bat, it’s rawness throughout is commendable – not many artists would bare their soul for their art so enchantingly. The first track ‘Care’ is about growing from a situation and moving on, as Laus reiterates, “I don’t want your sympathy/ Stop saying you give a s***”. It’s the quintessential introduction to the album, as Laus unleashes her airy vocals which contrast perfectly with the gritty guitar.

Rising above the past is a theme that crops up across the album. The second track ‘Worth It’, discusses infidelity and sexual experimentation but then making the decision to grow from them. The slow ballad ‘Emo Song’, is a moving track discussing a past relationship and how her childhood affected her as a teenager. ‘Charlie Brown’ showcases Laus’ powerful vocals, however, it also proves her inner-strength as she rose above her past of self-harm. The changing tempo does lead one to draw comparisons to the lucid rage of Nirvana. The title is indeed a reference to the Peanuts character, and Laus actually has a Peanuts Strip tattoo as a reminder to talk to others. ‘Sorry’ is a powerful lament to her mistakes in a friendship and how a friend’s life faded away due to a dependency on drugs, so she felt she had to separate herself from it.

Being comfortable in your skin and as your own person is also a theme discussed by Laus. The opening lyrics to ‘Dye It Red’, are “kiss my ass, you don’t know jack/ And if you say you understand, you don’t” and followed swiftly by, “Fuck me only when I’m keen/ Not according to your beer”. Despite it being about a friend’s relationship, it’s an empowering track reminding others they are in control of their life – no one else is. The track ‘Together’, follows within a similar vein. It deals with the idea of being dependent on a person but being okay with being by yourself. ‘Further Away’ acts as a reminder that people may not understand you or even like you, so long as you have your family, that’s all that matters.

Laus has previously said that a host of strong women inspired this album, as she listened to them throughout its creation. Think of Alanis Morissette’s soft-spoken voice, particularly in ‘Ironic’, for Laus’ softly-strummed ‘Back To Mars’. The influence of Julianna Hatfield has also crept on to the album, distinctly for the track ‘Worth It’, think of the changing tempo of ‘Universal Heart-Beat’. Also, the echoing veracity of Veruca Salt can be heard, especially on ‘Dye It Red’. One of the most striking aspects of this album is its capacity to inspire other women to pick up a guitar, as these inspired Laus.

The softer side of Laus is equally exposed on the album. ‘Horen Sarrison’ is a spoonerism and an ode to her longtime partner, Soren Harrison. Its beauty is in its shining guitars and delicate strings. ‘How Was Your Day?’ is a song of healing. Recorded during the first lockdown in Harrison’s garden, it’s vulnerable in it’s stripped back approach with the soft strumming, proving that Laus’ talent shines with and without a standard studio set-up.

The final track ‘Yoshimi, Forest, Magdalene’, are the potential names of Laus’ future children, each a reference to music or film. Featuring a roaring chorus reminiscent of ‘Teenage Dirtbag’ by Wheatus, it is positively weird in the most wonderful way. It acts as a lasting reminder that just like Laus, we should unabashedly celebrate every aspect of ourselves.

Her music may imply that she’s living in the nineties, however, through her art she discusses undeniably current themes. She’s offering a comforting hand to anyone who needs it, and we will gratefully accept – joining her on her impending voyage to stardom.

Fake It Flowers, is available to listen on all formats. You can stream it here, and you can purchase a copy from her store here.

Keep up with Beabadoobee: