You are here: Home / Manchester / News / Politics / “It’s Like Savages Shouting At Each Other”: Why Are Chinese Protesters Clashing In Manchester? 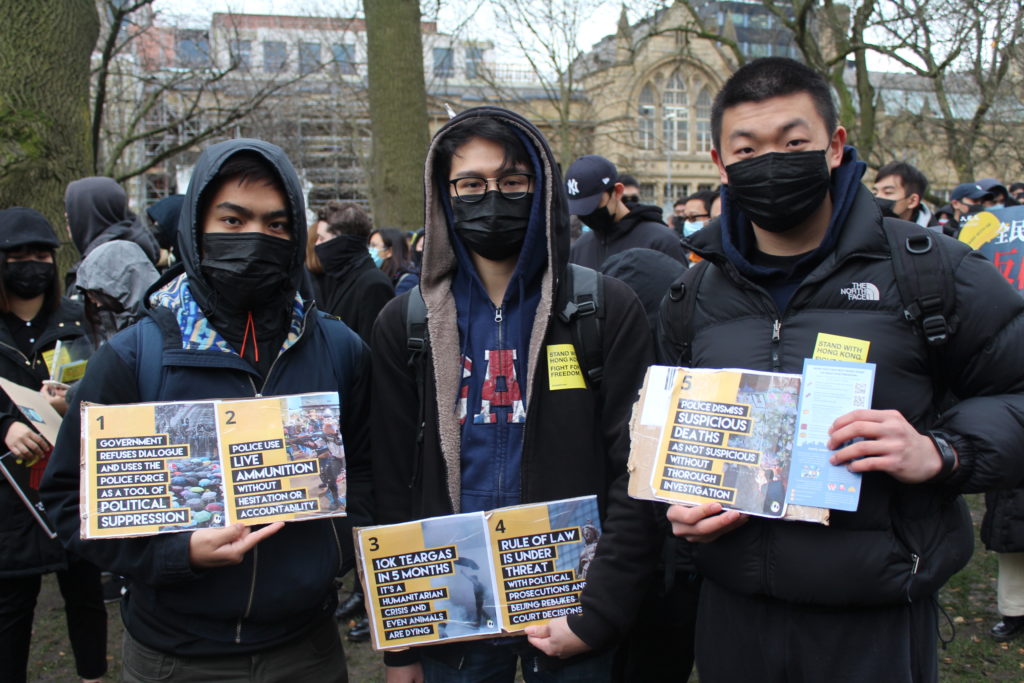 It’s the 11th of November 2019 and at the foot of the Queen Victoria statue in Manchester’s Piccadilly Gardens, a prayer vigil is about to begin. A group of around thirty young people disguised in black balaclavas and holding flags are solemnly assembled. They’re students from Hong Kong living in Manchester, here to pay tribute to a protester who has died a few days earlier after clashing with the police in Hong Kong.

The mood is sombre, but there’s resilience. The stakes could not be higher. One protester tells aAh! Magazine, “Hong Kong needs to be a democracy. We’re fighting for our future. We want freedom and autonomy, but you see what’s happening at the minute, how the government are treating the people. It makes me think I need to stand up, otherwise, we’ll lose every freedom in Hong Kong.”

The protests are respectful and restrained. At no point do any of the speakers addressing the crowd direct any words of anger towards the Chinese Communist Party or the Hong Kong government – the authors of the discontent in China. Instead, they call for prayers for their countrymen who are suffering on the other side of the world. The hymn ‘Hallelujah’ is played through a megaphone, and several people join in singing.

Another protester explains why the prayer vigil is so significant: “We’re doing this because we’re feeling sad about what’s happening in Hong Kong. We’re just hoping that coming together and mourning the sacrifice back in Hong Kong can cheer everybody up and bring us all together.”

However, he adds that events like this aren’t usually so docile. “The only problem is if the Chinese students…the mainlanders…come. They are the ones creating the conflict. There’s none of them here now, so it’s peaceful. But when they come, they escalate the situation very quickly, and shout out at us, trying to provoke us.”

The discourse surrounding Hong Kong has been growing increasingly hostile in the UK, as tensions mount between Hong Kong and Chinese students. This reflects the escalation back home, where the city has been thrown into months of turmoil.

“The only problem is if the Chinese students…the mainlanders…come. They are the ones creating the conflict. They escalate the situation very quickly, and shout out at us, trying to provoke us”

In June 2019, an Extradition Bill which would allow citizens of Hong Kong to be tried for crimes in mainland China (that many in Hong Kong feared would allow Beijing to simply arrest dissenting voices), was proposed by the Hong Kong government, prompting over 2 million people to take to the city streets in protest. To put it in context, that was over 27% of the population taking a stand.

What followed was months of clashes between the protesters and the police in Hong Kong, leading to the Bill eventually being withdrawn on October 23rd. However, the protesters weren’t finished yet – they had four additional demands. They insisted on amnesty for arrested protesters, for the government to cease classifying them as ‘rioters’, an independent investigation of alleged police brutality and voting reform to allow for universal suffrage to elect the Chief Executive and the Legislative Council.

The protesters’ ongoing commitment to their cause has inspired many the world over, particularly here in the UK.

However, with that passion comes a backlash. Pro-democracy protesters have frequently clashed with their ‘main-lander’ counterparts on British soil. One particularly nasty confrontation came on the 70th anniversary of Chinese Communist rule on 3rd October 2019, when the two groups squared off on Oxford Road in Manchester.

An article from The Northern Quota described how police stepped in to separate the opposing sides on opposite sides of the street, where a loud stand-off took place with flags and chants raining in from both sides.

Another incident took place outside Manchester Central Library later that month when a man taunted protesters gathered in solidarity with Hong Kong. The police had to step in on that occasion too.

“Hong Kong protesters will yell ‘One country, two systems’ and ‘No extradition to China’, and the Chinese will yell back ‘One China, One Hong Kong’. It’s like savages shouting at each other.”

Audrey continued to suggest why so many Chinese students may feel passionate about the situation.

“The messages being sent from the Chinese government is that these people are rioters, and I guess that’s making them angry,” she said.

“They feel like protesters are making Hong Kong chaotic. I don’t understand why they come to Hong Kong, or to other countries.”

Another protester at the rally in November said, “Some mainland Chinese people are trying to counter-protest by yelling different curse words, swears, and singing their anthems at us.

“But we really don’t mind bringing more noise to our protests,” he added.

Vincent Kolo, of chinaworker.info (CWI), explained to aAh Magazine why these tensions may exist so far from China: “The Chinese media have whipped up this idea that the Hong Kongers are grateful. The way mainlanders see it, they helped Hong Kong get rid of the British.”

Kolo was delivering a talk to a gathered congregation, who had turned out in solidarity with Hong Kong inside a cosy room of the Friends Meeting House. The building is no stranger to protest movements, and this issue was one people felt particularly passionate about – despite the fact it was happening on the other side of the planet.

“The messages being sent from the Chinese government is that these people are rioters, and I guess that’s making them angry”

Speaking to aAh! Magazine of why tensions had been brought over to Britain, Kolo opined that “When they come out and mobilise against Hong Kong protesters, the word has gone out from the embassy or the consulate.

Evidently, there is a problem, and it’s not one localised to Manchester. There have been stories coming out from campuses across the country, displaying the division that has come to exist between Hong Kong students and mainland Chinese students.

“The Chinese media have whipped up this idea that the Hong Kongers are grateful. The way mainlanders see it, they helped Hong Kong get rid of the British”

In October 2019, a nineteen-year-old Chinese student from Sheffield was arrested and ultimately suspended from his course, after he and 149 other Chinese protesters turned up to intimidate Hong Kong students. What initially started as a mere distribution of leaflets ended in a brawl as the student bodies clashed. The Tab reported glass bottles being thrown as police rushed to intervene.

Hong Kong students at an event in Birmingham on 12th October said they had been followed and filmed by older Chinese men and grabbed by one who attempted to remove a student’s mask. The next day, the same men turned up at Aston University’s campus at a documentary film screening by Hong Kong students and were later blocked by security.

In Newcastle, about 30 Hong Kong protesters encountered more than 100 pro-Beijing counter-protesters in the city centre, watched over by a handful of police.

Notably, these incidents happened months ago when the Hong Kong protests were at the forefront of the media’s spotlight. Now, in the shadow of Trump’s tensions with Iran, they’ve almost been pushed to the side. But that doesn’t mean the protesters here have forgotten.

Pro-democracy protesters want Britain to act. One protester, participating in a march in November 2019, told aAh! Magazine that words of condemnation from the Secretary of State, Dominic Raab, would not be enough.

“Without sanctions and other measures, China won’t take the United Kingdom seriously,” he said.

One thing is for certain – this won’t be going away. Pro-democracy protests across the UK and in Hong Kong are ongoing. With time ticking until 2047  – the year when Hong Kong is due to return to Chinese rule – this conflict will be one that will weigh on the minds of many for years to come.