You are here: Home / Culture / Manchester / Music / Interview: The Super Late Night on His Latest Track, Working as a One-Man Band/Producer and Keeping His Music Unashamedly Personal 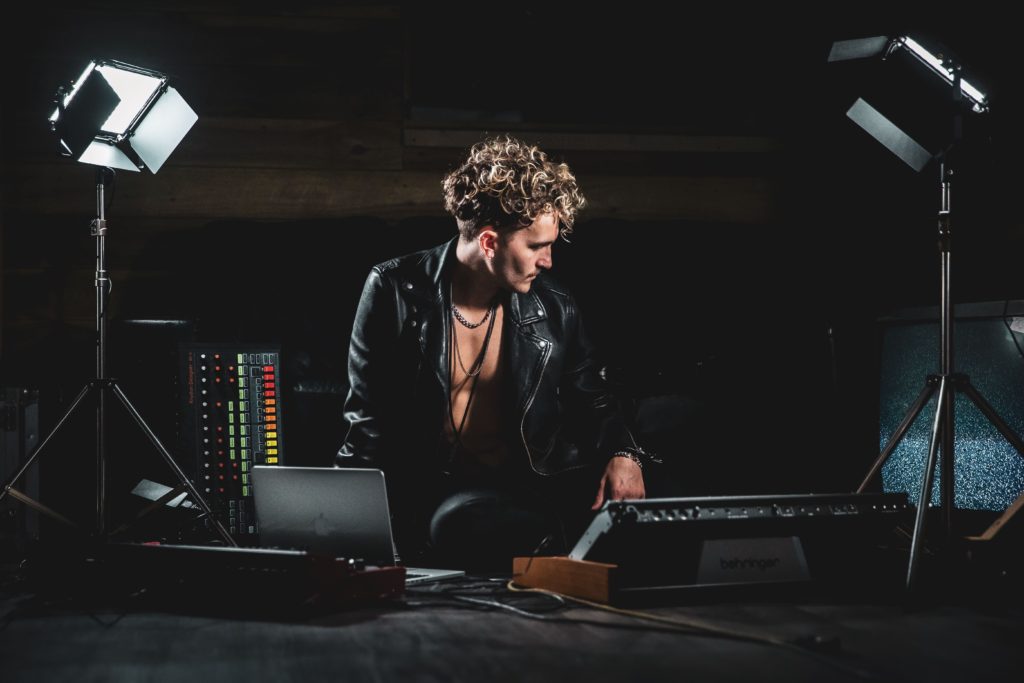 Manchester-based artist, The Super Late Night, is quickly taking the alt-pop world by storm. Boasting a tendency for dramatic hooks and powerful melodies dripping with synth – it’s little wonder why.

The self-described “emo but charismatic” artist, released his debut single, ‘Honey’, around two months ago. It is an emo-pop masterpiece, perfectly encompassing the extreme feelings involved in a relationship and the irritation which inevitably comes with it. The figures behind his releases speak for themselves. So far, ‘Honey’, has culminated around 30,000 streams on Spotify, and is only increasing.

Recently, he has released a stripped-back version of his debut single, ‘Honey‘, which showcases his impressive vocal prowess. He has also covered upbeat pop-track, ‘Physical’ by Dua Lipa, and a version of Harry Styles’, ‘Watermelon Sugar’. However, the latter involves a refreshing twist, by adding the production style of ‘Blinding Lights’, by The Weeknd – further describing that, “it’s a pretty apt way of describing TSLN music.” A bold comparison indeed, however, he is certainly heading in the right direction.

His latest original track, ‘If Not Now, Then When?’, is another equally catchy pop number, with an unexpected indie twist. Despite drawing comparisons from other artist and bands, such as The 1975, he ingeniously makes every track his own. His drive to experiment and take inspiration from an eclectic range of genres continually pays dividends.

We caught up with The Super Late Night over email, from discussing his musical inspirations to changing his stage name and his goals for the future.

How did you settle on the name ‘The Super Late Night’?

“I had been toying with the idea of changing my stage name to something more cinematic and emotive ever since, George (my producer) and I, set to work on new music – which was originally intended for my previous project. Countless hours and late nights in the studio later, we both began to feel like this collection might exist in a different world, a world that I as an artist, felt much more comfortable in. As our interest in synthetic textures and glittery indie-pop production grew, so did our confidence in our new musical surroundings. It was after one of these sessions I was driving home particularly late into the evening, that I began to think more about where I felt I existed, about who I was – what title I would give to the proverbial movie, if these songs were the soundtrack. At that moment I coined it, I was, and am, The Super Late Night.”

What/who inspired you to have such an eclectic sound?

“My musical tastes and influences have definitely evolved with me. I absorbed a lot of my early influences from my stepdad’s CD collection. When I was a kid, I would borrow his CDs and burn them onto my iPod to listen to on my walk to school, acts like Guns ’N’ Roses, Robert Palmer and Phil Collins were some favourites. They incubated my desire to become a musician. As I grew older, I developed a love for the rock and alternative bands of the day, such as Linkin Park, Biffy Clyro, and Weezer. Even now, I’m still constantly taking in inspiration from as much new music as I can. Recently, I’ve been enjoying The 1975, Chase Atlantic and The Band Camino. Throw all that together with the multifaceted musical landscape of the North of England, and you’ll get somewhere close to TSLN.”

Did growing up in the Manchester music scene influence your taste in Music?

“In some ways, definitely. In other ways, not so much. You only have to spend a day, or an evening knocking about town with your mates, and you’re guaranteed to absorb something cool or influential. That’s what we did, we would gig everywhere we could with whoever we could and picked up so much along the way. Either from the bands we were playing with, our surroundings or the gigs we were going to, the city is awash with beautiful art and culture. To be honest, my exposure to your household names of the Manchester music scene happened a bit later on at college, and then at University. However, by that point, I was taking in so much inspiration from elsewhere, that it all began to sit in the same headspace. The acts I really resonated with, were the ones that managed to interpolate the ideas and influences of their geographical upbringing, and make it culturally relevant to an international audience.”

How do you work as a one-man band/producer?

“More often than not, I’ll start with a hook or a lyrical idea, figure out the key, chords, tempo, etc which are usually all subject to change as the writing process goes along. Once the top line and most of the parts are there, I’ll take it to George and he’ll work his magic. It really helps to have a strong supportive group of people around me who’re all on the same team. I also have a few songwriting pals I’ll approach if I think an idea has potential, sometimes it can be incredibly valuable to have another set of ears help guide the tune somewhere you might not realise it can go. It’s basically like a big band without the drama.”

Have there been any aspects which you have found challenging?

“Yes, and no. Being in a band, it was definitely useful to have extra people around to share the workload. However, it was also frustrating as I was usually the most committed, or found myself doing most of the work behind the scenes. The advantages of being a solo act far outweigh the disadvantages for me. Plus, nowadays you don’t really need a “band” to produce this kind of music. When it comes to playing live, I work with some really talented, hard-working musicians who play a huge part in translating the sounds- George and I, create in the studio to a live setting. As a solo artist, you can work with whoever you want, whenever you want, without the politics.”

Your debut single ‘Honey’ had around 30,000 streams on Spotify, how did it feel to have such notable success on your first track?

“It feels wonderful to have had so many people listen to your tunes and engage with them. The reason we all make music is to have an outlet for our feelings and form a connection with those that resonate with them. So, having even one person resonate with the things I say and do musically is phenomenal. I try not to think too much about the numbers though, as long as I’ve made something I’m proud of and put my heart into it, then that’s the end goal. I try and remind myself as often as I can, that even the act of releasing something is amazing in itself. Some people dream of writing and recording in a big fancy studio, and putting music out- I get to do that whenever I like.”

What was the inspiration behind the music video for ‘Honey’?

“In its essence, ‘Honey’, is about the dichotomy of emotions you can experience even in the most fulfilling of relationships. I wanted the video to illustrate how quickly emotions and feelings can jump from one to the next, so the polarity between the light and dark shots were important. Technology, but more specifically the TV, has been a very important visual theme for TSLN as a whole, not just because of its relationship with film. I think the Television symbolises comfort and nostalgia, it’s the centrepiece of every household. It helps us escape, indulge, reminisce, inform ourselves and learn. It’s there when you’re happy and when you’re sad, illuminating even the most personal, private moments of one’s existence. The glitches, the editing style and the effects, are an extension of that overarching theme.”

Your sophomore track ‘If Not Now, Then When?’ Was written with a friend in 2017, did having a co-writer and writing it three years before it’s release, change its production?

“I wouldn’t say the song itself necessarily changed the production, this song went from demo to complete then back to demo, then reimagined and complete again over about a year and a half. What changed the song was everything else going on around it, this song was one of the ones that really helped cement the decision, that this collection of songs belonged to a different musical universe. What’s great about working with a producer like, George at Homefire, is his ability to take an idea in whatever form I feel like presenting it to him, and make it sound like The Super Late Night – yet still maintain the intention and feel with which it was conceived.”

You’ve previously said the track is about “confronting the ifs, buts and maybes of life and relationships, and the fear of committing to change”. Has centring your tracks around realist lyrics always been an intention of yours?

“Absolutely, even with my earliest songs, I’ve always written about myself and my own experience in one way or another. The themes and subject matter can usually always be traced back to a pivotal point or moment in my life. I’ve always seen my music as a place where I can be deeply and unashamedly personal, that’s not to say I don’t ever draw inspiration from other sources- it’s just that the songs usually always find their way back to me.”

Aside from music, how have you been keeping busy during lockdown?

“Lockdown has actually been pretty good to me. I’ve been locked down with my family so it’s nice spending more time with them. My friends and I, have been doing the standard virtual quiz every Friday. I’ve also been doing far more exercise and eating far healthier meals than I ever would normally. Consequently, I’ve been honing my cooking skills, which if you’re me, basically just means pan-frying everything with a ton of garlic.”

When can we expect to hear more releases from you?

“Following ‘If Not Now, Then When?’, I have a few more singles I intend to release throughout the remainder of the year. The next one is titled, ‘Falling Asleep’, we’re just finalising everything now as we’re hoping to release it mid-July.”

“Like all musicians currently stuck in their houses, it’d just be amazing to get back out on the road, play some shows, see some faces – but as we know everything’s (understandably) up in the air at the minute. I’ve always wanted to sell out the Apollo though, that’s always been the main goal. Whenever I think about playing live, that’s the venue I always see myself in, usually when I’m singing in the shower.”

You can listen to ‘Honey’ and ‘If Not Now, Then When?’ on all major streaming services and keep an eye out for his forthcoming track, ‘Falling Asleep’.

Keep up with The Super Late Night: