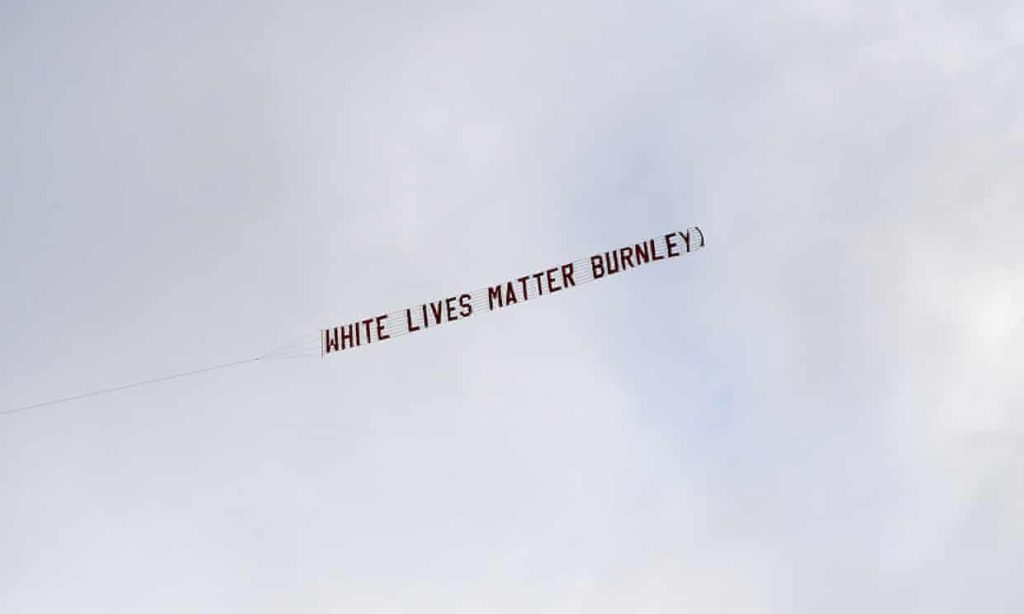 A plane with a ‘White Lives Matter’ banner circled the Etihad stadium on Monday, shortly after players took a knee in solidarity with the Black Lives Matter movement.

Opening the game, all 22 Burnley and Manchester City players and staff from both clubs knelt to show their solidarity with the Black Lives Matter movement, mirroring the actions of Colin Kaepernick in 2016.

Moments later a plane with a banner which read “White Lives Matter” circled the stadium for the first ten minutes of the match before flying away.

Due to the coronavirus the Premier League was postponed until 17th June. Despite this the club remain optimistic for the way in which sport is heading.

Since resuming the game, players and officials have been showing their support for the Black Lives Matter movement’s cause and its fight for racial equality.

Raheem Sterling, who last year had monkey chants and Nazi salutes directed towards him on the pitch by Bulgarian home fans, said it was a “massive step” that players knelt in support of Black Lives Matter on the opening night of the league.

Premier league players have also been wearing shirts with ‘Black Lives Matter’ written across their backs in place of their names.

Burnley issued a statement strongly opposing the plane’s banner. It stated: “Burnley Football Club strongly condemns the actions of those responsible for the aircraft and offensive banner.”

Burnley asserted that the banner in no way represents the values of the club and extended its sincere apologies to the Premier League, to Manchester City and to all those supporting the anti-racism Black Lives Matter movement.

They reassured that they will “work fully with the authorities to identify those responsible and take appropriate action”.

There has been a mixed reaction of the incident on social media. The majority of people have condemned the act because they see the message as one which is motivated by racism and a denial of equal rights.

Football fans on Twitter have been quick to vocalise their disgust towards the stunt, calling it “disgraceful” and “embarrassing”.

Burnley defender and captain, Ben Mee, stated that those behind the banner and those who support such a statement have “completely missed the point” and that they need to “come into the 21st century and educate themselves.”

Some internet trolls have made quick jeers like: “I’m surprised the RAF weren’t scrambled to shoot down the ‘far-right’ aircraft”.

It has now also been revealed that a Burnley fan, Jake Hepple, has claimed responsibility for the stunt on social media.

Hepple refused to apologise in his social media post and shared a video of the incident on his Facebook page after the game. His post read: “I’d like to take this time to apologise .. TO ABSOLUTELY F ****** NOBODY! It’s now apparently racist to say white lives matter.”

The Black Lives Matter movement has gained significant momentum across the world since the murder of George Floyd in America last month. Far right protesters have rallied to counter the movement and one of the ways they have decided to send their message of disapproval was through this stunt.

The Lancashire police recognise that the stunt had caused great offence. However, they stated that after assessing all the information available concerning the incident, the force had concluded “that there are no criminal offences that have been disclosed at this time”.