You are here: Home / Uncategorised / Hello Cosmos on their debut album ‘Dream Harder’, creating music during lockdown, and advice for aspiring musicians 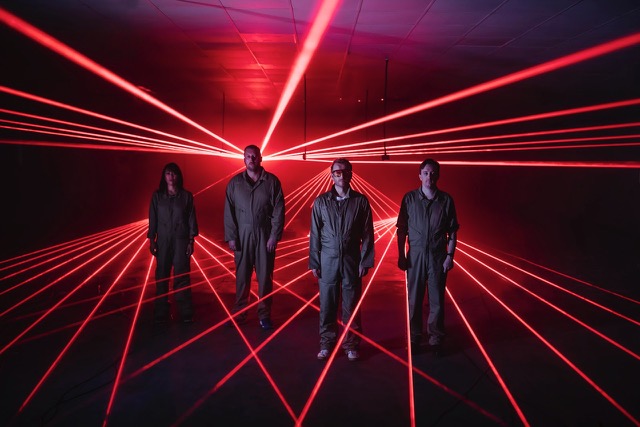 ‘Fuse’, the new upbeat single from Dream Harder explores the impact social media and mainstream media has had on our minds, shaking us out of the slumber that we’ve become accustomed to.

Dream Harder consists of a strong visual concept, and socially conscious lyrics analysing the current state we’re living in and taking back control of things we have lost.

Tell us more about your debut album, when is it coming out?

“Our debut album has been recorded over a series of studio session at Greenmount Studios in Leeds. Me and my brother Simon our drummer came up with a set of drum and bass grooves that we invited friends and bandmates to drop in and experiment on. There’s over 20 people featured on the first record and it’s really interesting to look back on it now as it is released as a cohesive piece of work. At times we weren’t sure all the ideas sounded like the same band.”

“Dream Harder is being released on Vinyl and digital. Given these days are so restrictive and there is little to get excited about we have thrown our focus into having some fun sharing this record with people.”

Which song are you most excited to release?

“I’m always in love with the last thing I did so for me it’s the album closer ‘Renegade Love.’ It’s the only track not fully recorded in Leeds. I was on a trip to the states last year and managed to find time to drop into a studio in Brooklyn NYC with a friend Errol Kolosine.”

“We recorded some jams on drums and bass and later cut out a section which became the basis of that track. The lyrics have taken on so many new meanings since they were recorded, I’m not sure where the line ‘a hug without an arm’ came from but its almost spooky given the unimaginable fact when it was recorded that by the time it was release we wouldn’t be allowed to hug!”

“The lyrics also talk about taking back control from the things we’ve lost to social media, so much has been said about ‘taking back control’ in the Brexit debate but I just thought that we’ve lost more to our phones in every moment of the day than we ever will to the EU.”

What have you been doing to stay creative during lockdown? Was the new album written during this time period?

“During lockdown I finally set up to do some home recording. It’s been a great thing to learn how to do basic production and I’ve made some cool demos that will form the basis of the second album, which we are recording in October back in Leeds.”

What is your process during working on new music? What do you begin with?

“Usually a bass line and a drumbeat. The whole project was born out of the energy of me and my brother, you can hear it in the big sound of the record. Simon has an incredible power and energy on drums, and it brings out the best in my bass playing. From there it’s fun to layer up other sounds and instruments.”

Would you say music comes out of you unasked or does it take a lot of brainstorming?

“For me it’s all about setting up the right conditions for it to flow. It all comes within the moment and you just need to let it come and capture it one way or another. It’s funny I guess I spend all my time thinking about music and brainstorming it in my head but when it comes to writing it all just happens in that split second, when you feel its right.”

What are you looking forward to most about playing live shows again?

“Volume! I can feel my body physically missing the impact of huge speakers powered through me. It’s been an insanely tough time for everyone in music, but we are the one generation who will ever truly know the difference of what it feels like to have live music or not have live music in our lives. When we get it back I think it will mean more to everyone than ever before.”

What artists do you look up to?

“Recently Anna Meredith has made a huge impact on me, she’s got such a unique approach to instrumentation and composition.”

“Kate Tempest is someone I consider otherworldly in her abilities and Run the Jewels over their four albums have not put a foot wrong. They are the sound of the moment for me with Zach De La Roch featuring on each of their albums. There’s also a great nod to a big influence of Rage Against the Machine too.”

Any advice for aspiring musicians?

“Rick Rubin’s ‘Broken Record’ podcast is my go to for inspiration and a deeper look at what influences and drives artists, from there you can hear so many stories of how major artists developed their careers.”

“It’s a marathon not a sprint. There is a wealth of advice online and so many ways to embark on a musical journey. The most important thing is to see it as a joinery and not put all your eggs in one basket. I did that for years, thinking the next single, gig, album had to explode for it to be worth me doing music. In the end I decided that I wanted to make ten albums and enjoy what that would bring along the way, the people, the sounds, the creativity and this is album number one.”