You are here: Home / Culture / Amazon For Drugs: How Dark Web Marketplaces Are Changing The Ways Illegal Drugs Are Consumed In The UK 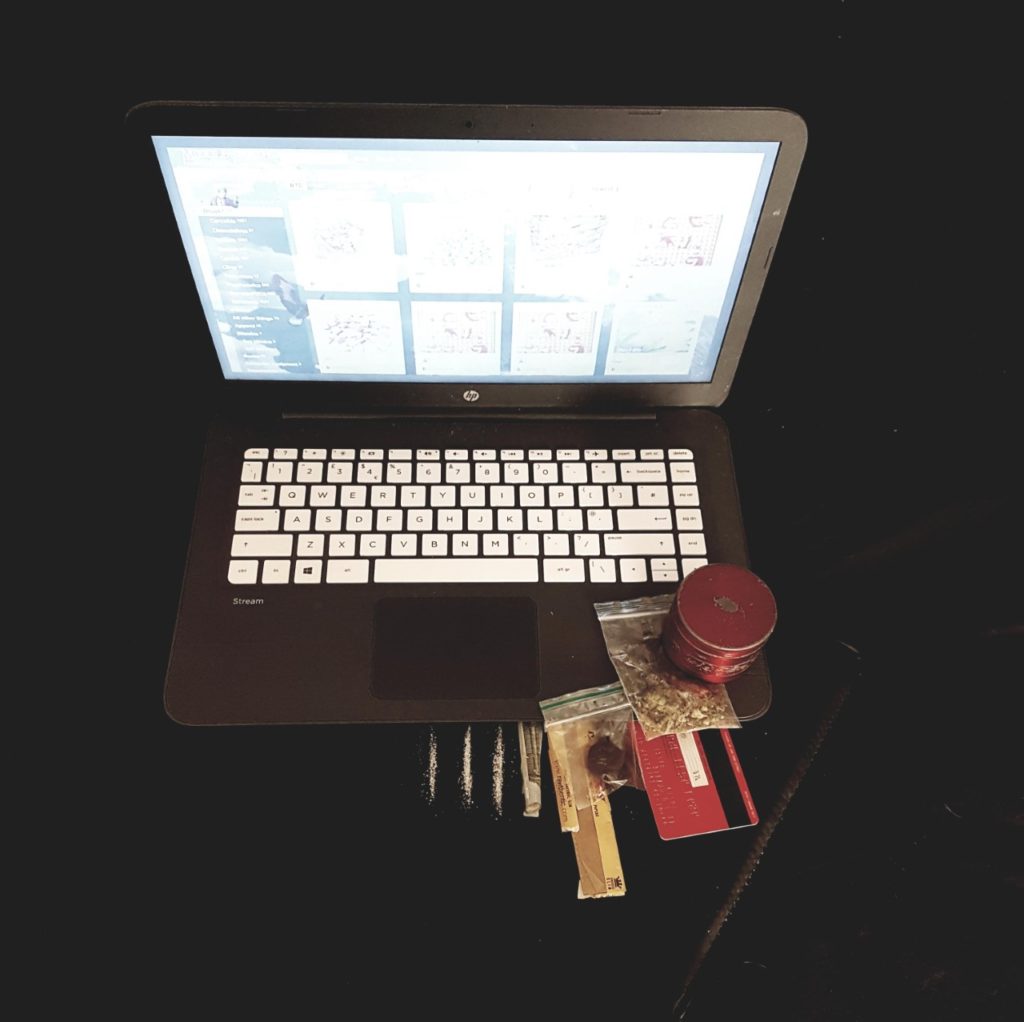 Has access to the ‘Dark Web’ catalysed the ways in which drugs and substances are consumed in modern culture and are we now in a situation more damaging to society than it has been before?

The consumption of drugs within society has always been a prevalent part of both modern and popular culture. Whether seeping out of the LSD-laced sounds of the 1960s or jumping up from the ecstasy-fuelled poundings of the 1990s, substance use and the ever-changing drugs market has continued to project various movements of expression and countless representations of artistic creativity.

Although the isolated hippie is now a rare phenomenon, no longer acting individually, making LSD up in the lonesome hills, the loitering and well-known street dealer, operating collectively, outside on various street corners, is also facing new and emerging challenges.

Since Nixon’s War on Drugs dominated news headlines in 1971 to crack down on public enemy number one – the use of illicit substances in society – a new way of scoring drugs has sprung up behind the government’s back. With technological discoveries advancing throughout the digital age, the obligatory hassles that were once associated with the buying of drugs from the street are evaporating. Catalysed by the ever-present combination between pop culture and drug consumption, the power of the internet has brought a new way of scoring illegal drugs to shores of the UK: The Dark Web. A hidden marketplace where drugs are being sold on the internet.

After purchasing drugs on the Dark Web for personal use this weekend at the White Hotel in Salford, a 22-year-old drug user in Manchester, who has asked to remain anonymous, said: “I no longer leave the house to pick up drugs from on the street. They come delivered to my front door and even come tested and reviewed. I know what I’m getting each time and can get them from the same site so that I don’t have to get up close and personal with different street dealers. I feel much safer because nobody knows who I am and the stuff that I get is usually better quality too.”

Data from the Global Drugs Survey shows that since 2014, the number of users buying drugs online in the UK has risen by 12.4% to 28.6%, with cannabis, MDMA and LSD being the most ordered substances. Now, in shunning traditional methods of scoring from the street, over a quarter of British drug consumers have admitted to buying illegal drugs from marketplaces on the Dark Web. Recent testing, conducted by The Loop, a harm reduction charity in Bristol and Durham, suggests why: Out of the 170 street drugs that they tested, 24% of the substances were not what they were supposed to be. When testing ketamine, they found a psychoactive substance named 2-FDCK, which is 1.5 times stronger than ketamine and which lasts up to three times longer. When testing MDMA, they found the stimulant drug N-Ethylpentylone, which has been linked to an increase in the numbers of overdose deaths in the UK. With street dealers cutting drugs to boost profit margins nearly a quarter of street drugs contain substances that they shouldn’t. As a result, drug-related deaths have reached record highs across the UK.

Jamie Bartlett, a journalist for The Spectator and the author of The Dark Net: Inside the Digital Underworld, said: “On the one hand, [the Dark Web] means there are more drugs, more available, more easily, to more people. And by my reckoning, that is not a good thing. But, on the other hand, if you are going to take drugs, you have a reasonably good way of guaranteeing a certain level of purity and quality, which is incredibly important. And, you can do so from the comfort of your own home, without the risks associated with buying on the streets.”

In providing anonymity, the Dark Web has pushed the drug market into a new age, one operating behind the eyes of the law, one creeping up silently behind the dealers on the street. While choosing to browse on the deepest level of the internet, various websites appear that resemble the online marketplaces of Amazon or eBay. Users can view high resolution photos, detailed descriptions, customer reviews and product ratings. As new websites surface, competition between existing sites spark an economy where the quality of drugs go up as the prices of drugs go down. Special offers, which include the classic marketing ploy of ‘buy one get one free’ and the added incentive of the much-loved free delivery, resemble the legal online marketplace as well as the other deals that appear on our high streets. Like in the consumer market, where employees are taught that ‘the customer is always right,’ a similar motto applies on the Dark Web. This attitude benefits not only the consumer, but the seller too, as once positive feedback has been given, more sales appear.

According to consultant psychiatrist and the conductor of the Global Drugs Survey, Professor Adam R. Winstock: “People are looking at getting the best bang for their buck. They look for convenience, product range, quality, vendor ratings – it’s exactly the same reasons you would buy stuff off Amazon. It could increase problems because all of a sudden people are able to get drugs really easily and they’re better quality, but on the flip side, they’re not meeting dodgy street dealers and there is less risk of arrest and criminality.”

Users choosing to buy drugs on the Dark Web gain access to illegal marketplaces through the use of a Tor browser, a private spiderweb created by the US Naval intelligence during the 1990s to protect secret information. Shortly after its creation, it was released into the public domain. As an acronym for The Onion Router, Tor opens up layers of the internet to reveal where online content is hidden, tracking is prevented, and both the location and identity of users are concealed. It can be downloaded on any internet browser and then used by anyone, enabling illegal sites on the internet to be accessed; one that well-known search engines, such as Google and Firefox, are unable to reach. While browsing the Dark Web, rather than using a credit or debit card, the cryptocurrency Bitcoin is the preferred payment method. Even in times of economic uncertainty, it remains able to keep the details of those buying illegal drugs from being traced back to their location. The desire for added security on the internet only brings to the table an already existing argument. One discussing severe online privacy breaches and one enflamed by the recent and controversial actions of the Facebook Cambridge Analytica Scandal, in which millions of Facebook users had their data stolen for political advertising purposes in 2018.

The Dark Web is known as the ‘Wild West’ of the internet because of the large array of illegal activity that appears on it. And while certain drugs remain criminalised in the UK, carrying with them heavy prison sentences, the Dark Web operates illegally as an online alternative to the well-known street dealer. Yet, with added security and online privacy, attempts to obstruct online drug sales have caused problems for the British police with their difficulties in tracing illicit substances to where they had been bought or sold. Often, when one site shuts down, another site reappears shortly afterwards, with its owner simply making a new URL to transfer the original content across. Occasionally, the police can prevent this. In locating where the existing customers migrate to, the police can obstruct traffic from flocking to the new sites where Dark Web drug sales are occurring. Data from the European Monitoring Centre for Drugs and Drug Addiction (EMCDDA) suggests, however, that this sort of interception is a rarity. With only 10% of online drug markets being shut down by the police, the FBI’s closure of the illegal online marketplace Silk Road in 2013 still remains the most notorious Dark Web drugs bust. Its creator, Ross Ulbricht, was sentenced to life in prison.

Chris Monterio, a Dark Web and cybersecurity expert based in London said: “I think the police are ill-equipped to deal with this. If you manage to arrest a number of drug dealers, be it nationally or internationally, you do very little to prevent the demand for people to buy and sell drugs. If buyers can’t trust one website, they move to another website. It’s very questionable whether it’s worth police resources going after these people buying drugs online compared to them offline where they’re associated with criminal gangs, violence and risk.”

Two years ago, at the 2018 National Cyber Security Centre’s annual conference, former UK Home Secretary Amber Rudd pledged that £9 million would be spent by the Home Office to tackle illegal activity on the Dark Web. Announcing that the money was to help “combat the criminals who continually exploit the anonymity of the Dark Web”, and revealing that we are twenty times more likely to be a victim of crime online rather than offline, Rudd delivered a clear message on the dangers of the Dark Web. Spurred by the arrests of five University of Manchester students, prior to Rudd’s speech, who had made £800k from selling drugs including Ecstasy, LSD and 2-CB online, Rudd declared that in the coming years, the UK government and the National Crime Agency would crack down on the illegal activity appearing on the internet. Since this pledge, however, a 2019 EU Drugs Market Report has been published by the European Monitoring Centre for Drugs and Drug Addiction. It notes that two years on from Rudd’s £9 million, organised gangs selling drugs in the UK are at the forefront of Dark Web sales with an estimated profit of £24 million. More than anywhere else in Europe.

Head of Drug Threat at the National Crime Agency Lawrence Gibbons said: “The scale of drugs being bought and sold on the Dark Web remains small compared to the amount being sold by street vendors or wholesale. Nevertheless, tackling the organised crime networks involved is a priority for the National Crime Agency and law enforcement partners. The NCA’s unique capabilities allow us to identify and target those using the Dark Web for criminal activity.”

As new sites emerge, deep inside the hidden layers of the internet, drug sites on the Dark Web are catalysing the ways in which illegal drugs and substances are consumed in modern culture and throughout society. In operating as an alternative choice to the street dealer, at a time when drug-related deaths are reaching record highs across the UK, the online marketplaces on the Dark Web are providing drug users with another method of consuming illicit substances; one where product ratings and customer reviews provide an added safety net for recreational use. Although the possession and selling of drugs remains illegal in the UK, the ability to buy illicit substances from inside the comfort of your own home, without having to interact with street dealers, now means that we are in a situation that is less damaging to society. With the ever-present combination between pop culture and drug consumption, the Dark Web is here to stay, delivering drugs to the doorsteps of those living in the UK.