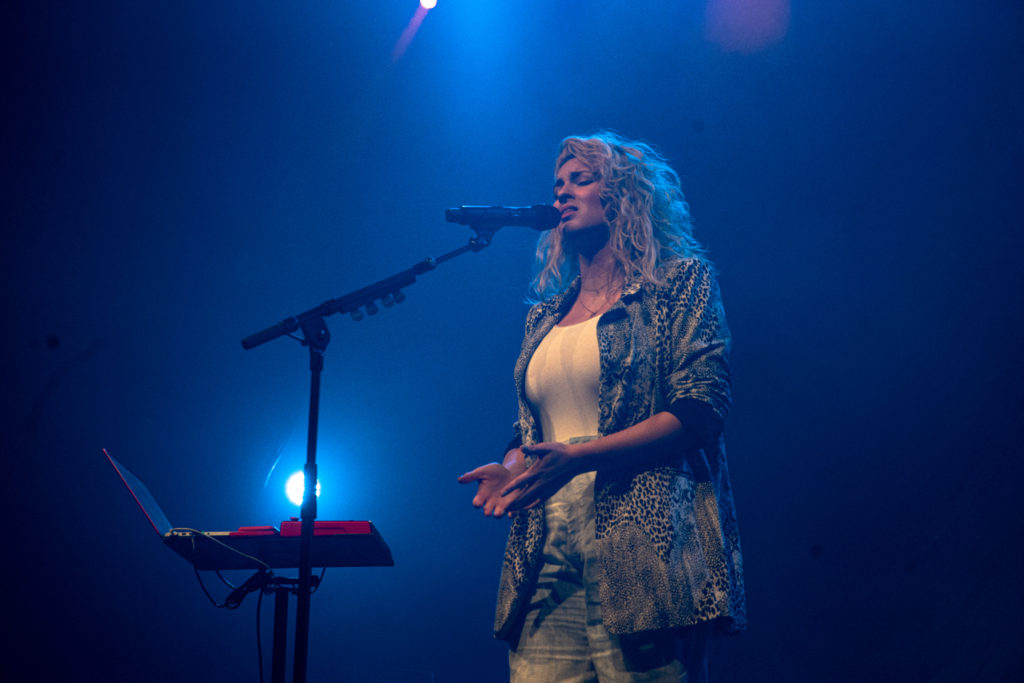 Jake Isaac is an up-and-coming artist, a multi-instrumentalist from South London that has four EPs and one debut album. He has been playing instruments since the age of three and pursued music more professionally as a session musician while at university. Eventually he started releasing his own music and has since performed at Glastonbury and toured globally.

He emerged from the side, dressed casually and his hair coloured maroon. A few screams from the crowds. Melodious picking on his guitar for his introduction that goes on for some time, the crowds go silent, he changes the motif and opens his mouth to sing. Captivated by his first note, his tone was raspy and smooth. Hearing someone sing for the first time is always a special experience because you never really know what to expect and in most cases are surprised by the sound created, whether in a good way or bad. In this case, pleasantly surprised.

After his first song, he introduced himself and lauded Tori Kelly thanking her for having him on her tour. Normally, he does his sets with a full band but this evening it was just him and his guitar. Doing sets like so, he found quite interesting because he make each show different, “Would it be alright if I came down?”. Cheers from the audience and down off the stage he came and stood in the middle of the audience who formed a civilised circle around him. As he sang unamplified, he turned around to make sure everyone got to see him sing, his voice booming with power. The next song he went back to the stage and performed a more up tempo song and really showed off his range whilst getting the audience to participate: “Ladies you sing!”.

His final song was a beautiful, original love song in which all the emotions were felt and then transitioned beautifully into an acapella chorus of the famously covered ‘I Can’t Make You Love Me’, originally recorded by Bonnie Raitt. The cheers rang out, it was so seamless, enchanting. He did the chorus a second time with the guitar and ended it with wonderful inversions and modulations. It was a masterclass on how to make a cover your own.

However, the act everyone came for, Tori Kelly calmly walked onto the stage and screams ensued. She came out in fresh Nike Air Force 1’s with white socks, light blue baggy jeans, a white top and an oversized grey print jacket to finish the look. Her golden mane looking as gorgeous as always with her signature side parting.

Immediately she started singing the lead single from her album Inspired By True Events, ‘Change Your Mind’. She had a laptop with a midi pad providing her backing track but she did the beats live on stage and she also had two guitars. During the song, her guitar wasn’t making sound so she had to take it off mid-song to the sound engineers, so professionally and gracefully, if you had no idea anything was wrong, nothing seemed unusual. Rolling through her set of songs effortlessly, from her most recent albums, it was remarkable.

In 2018 Tori Kelly released a gospel album produced by an award winning gospel artist and producer, Kirk Franklin, and blessed us with the lead single ‘Never Alone’, easy to pick up and sing along to as the refrain consisted of one line “Oh you’re never alone”, the crowd sung along easily.

Part way through her set she asked if it was okay to throw it back and of course the crowd was delighted. She began her medley of older songs from when she was just starting her career with Confetti weaving into ‘All In My Head’ and even played ‘Thinking Bout You’, a Frank Ocean song, one of her covers that helped push her into fame when it went viral on YouTube eight years ago. She ended the medley with ‘Dear No One’, which was the lead single from her second EP, Foreword. She did short snippets of each song that left the audience longing for more.

After speaking about all the doors that were closed in her journey she started the next section with the song that signalled a new beginning in her career: ‘Unbreakable Smile’, saying that, no matter what happens she will continue to smile through it all.

The best part of the gig was yet to come even though we thought we had seen it all. Someone brought out a stool, the lights went down, and there was a spotlight on Tori Kelly. She spoke about her latest album and how at the time she was really going through it and chose to express it into song. “I hope I can play this song for y’all”. She sits down and starts playing the into for ‘Sorry Would Go a Long Way’. Now having listened to her album uncountable times, it’s clear this is a deep song and all the feelings are there but hearing it live brought people to tears. It was just her, the guitar and her voice carrying so many emotions, one felt like they lived through this song and had a relationship breakdown, hurt and waiting for someone to tell them they were sorry. It was so touching so hear a song really personal to her and her voice was just spectacular.

For the song ‘Should Have Been Us’, she did some more beats on the pad and someone from the audience shouted “DJ Kelly!” After she’d said: “I feel like a DJ,” and awkwardly, but cutely, laughed before starting. There were moments where she put down the guitar and let the backing tracks play through the Mac, she came to the edge of the stage bending down to interact with her fans, her beauty blowing everyone away. She also has a lot of swag, dancing on stage vibing out to her songs, so cool, so chill. One of the greatest artists of our generation.

She ended the night with ‘Nobody Love’, which was fitting because she wouldn’t be where she was without her fans who love her dearly and she loves them too. Often engaging the audience to sing along, in this final number she got us to sing the chorus “AIN’T NOBODY LOVE, AIN’T NOBODY LOVE LIKE YOU DO,” a few times while she ad libbed on top of it.

Before long she was thanking everyone for coming and just as quickly as she came on, she left. The audience were hoping she’d come back on but the lights went on and the show was over. Her popularity continues to rise since she started her YouTube channel back in 2006 and it is exciting to see what she’ll get up to next. Tori Kelly is someone who is comfortable in her voice and is very aware of the vocal abilities. She may be in her 20s but she sings like someone who has been singing for longer with such mastery and skill and I’m certain she’ll continue to for a long time.