You are here: Home / Culture / Music / Album Review: ‘Self Made Man’ by Larkin Poe 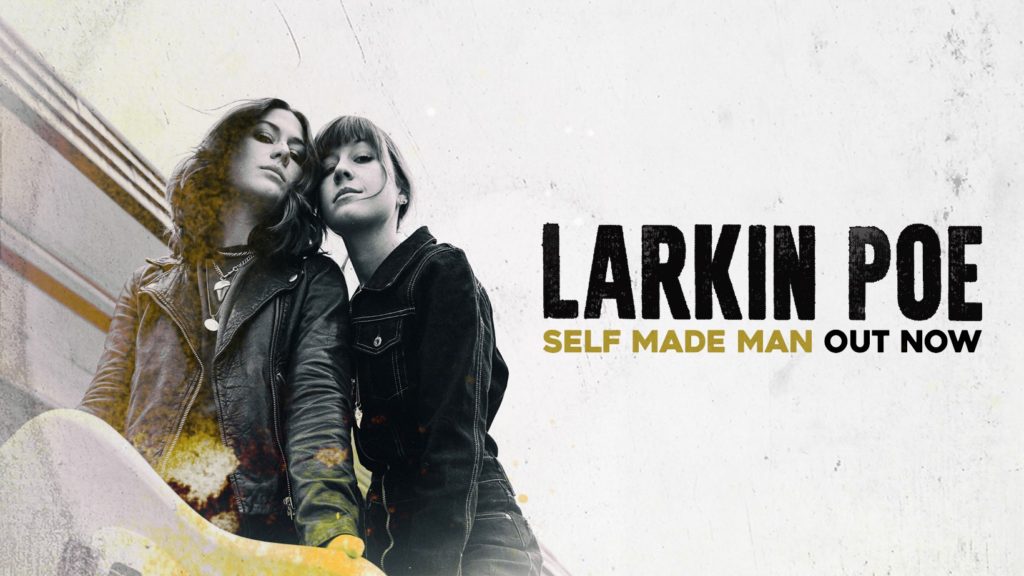 I first became aware of Larkin Poe when they supported Elvis Costello five-years-ago, during his Detour concert at Bridgewater Hall.

But it is another elite singer-songwriter who sisters Rebecca and Megan Lovell new album has more in common with – Bruce Springsteen. Blue Collar life is much in evidence in the lyrics. “I was a Pepsi Cola factory man/Made my living with my own two hands”, the narrator of ‘Tears Of Blue To Gold’ tells us.

Like Springsteen, Larkin Poe also use fire as a vivid metaphor – particularly in the song ‘Holy Ghost Fire’: “Stargaze child in a neon night/ Burns so bright, can’t see the light.”

From the defiant opening opening title track, the sisters are determined to play blues-influenced Americana rock at full throttle. Hold on to your Cowgirl/boy hat in case it flies off into the dust.

The Atlanta-bred duo’s ‘Back Down South’ is a shameless love-letter to the spiritual-heart of the album – “The trees down in Georgia/ Grow as tall as a cross/ Where little Richard was singing/Where rock n roll learned to walk.”

I remember Larkin Poe, from the Elvis Costello concert, as having more of a country element to their songs than is evident on ‘Self Made Man’. But for this album, their fifth, it is clear they want a sound-world which reflects what Megan Lovell, refers to as “the joy and positivity that we ourselves feel and appreciate.”

At times, this verges on pastiche ‘Ex-Con’ (“Broke down on the highway/ Burned out in an ashtray”) and ‘Scorpion’ (“Venom in your touch/ Now it’s in my blood”) could fit easily into a Budweiser advert.

But the catchy ‘Every Bird That Flies’, is stripped back lyrically and chains you to its dark world and soulful riff until it lets you go again. The sisters appreciate that soul-searching lyrics don’t necessarily need a minor-key mournful musical setting.

At its best the songs reminded me of Sheryl Crow and Michelle Shocked, although the sisters have not matched the heights of those two singer-songwriters, yet.

Until the slightly mellower closing track ‘Easy Street’, the pace never lets up. ‘Self Made Man’ – produced by Larkin Poe with Roger Alan Nichols – is infectiously enjoyable, from first to last song. I hope that the duo introduce a bit more musical variety and texture next time – they have a lot more to offer.

But for now I’m happy to hitch a ride, sing along to their ballads and play air guitar in the back of their truck, as if I’m an extra in a Cohen Brothers film, which has a raucous soundtrack zooming me along to wherever the Lovell sisters are heading next.

Tour details for Larkin Poe can be found at www.larkinpoe.com/#tour-section