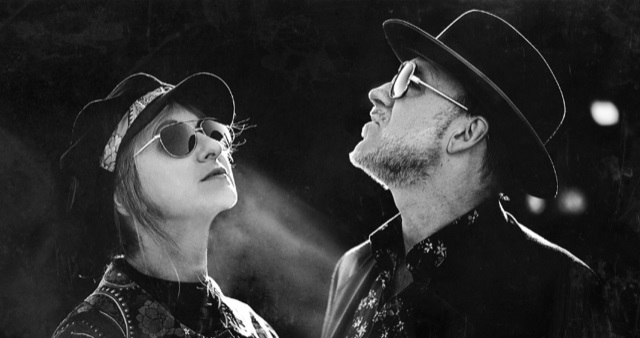 Elvis Costello is one of those rare artists who had a few youthful and lucrative years of hit singles yet continues to compose new songs that are much more than just inferior rewrites of his classic songs.

It is over 40 years since he performed on Top of the Pops miming to ‘Watching the Detectives’, ‘I Don’t Want to go to Chelsea’, ‘Oliver’s Army’ and others. Always remaining current, he has just released ‘Hey Clockface’ which opens with Costello speaking over an Arabian instrumental track.

Anyone who puts together an album of Costello covers has an embarrassment of riches to choose from. My Darling Clementine is husband and wife duo, Michael Weston King & Lou Dalgleish. They have opted to bring out the country of Costello’s collection. Their new album – named after a song from, The Delivery Man, album – is made up of thirteen tracks. The last is one of the duo’s own compositions – ‘Powerless’. They are accompanied by Steve Nieve – Costello’s piano man since 1977. With all that going for it, the question remains – will this album appeal to many listeners beyond long-term Costello fans?

There are some songs where the pair inject new life into lesser-known tracks. The duo let loose with ‘The Crooked Line’, supported by a sound-world of steel-guitars and a Wurlitzer-style organ. They also reinvigorate ‘I Lost You’ (from 2010’s ‘National Ransom’), salvaging it from relative obscurity with the help of some jaunty piano accompaniment.

‘That Day Is Done’, from Costello’s collaboration with Paul McCartney blossoms with Michael Weston King’s rich, baritone voice and more vulnerable but also the agile and impactful style of Lou Dalgleish.

On other numbers, such as ‘Heart Shaped Bruise’, they set themselves a high bar in inviting comparisons with the sublime duet on ‘The Delivery Man’ by Elvis Costello and Emmylou Harris.

Despite singing ballads of infidelity, strife, and estrangement, Lou Dalgleish and Michael Weston King sound very happy in each other’s company – certainly a good thing for a married couple. But, it means that the listener can feel a bit like an onlooker rather than someone whose life story is being told by someone who seems to be singing directly to and about them.

I do not detect a full narrative sequencing to the songs – tracing the arc of a relationship – something which could have made the overall experience more compelling to the dedicated fans and the newcomers. It might have also put a new spin on the ‘King of America’ classics – ‘Indoor Fireworks’ and ‘I’ll Wear It Proudly’ (a rare Costello love song, in that it has a happy ending.)

Someone somewhere, maybe even Lou Dalgleish And Michael Weston King, must be assembling a musical based on Costello’s songs. Elvis himself is reviving one of his former collaborations – with Burt Bacharach – to compose a new Broadway musical, inspired by the film A Face in the Crowd (1957).

Indeed, in 2001 Dalgleish wrote and appeared in the play ‘They Call Her Natasha’, a story of obsession and infatuation, based around a series of Elvis Costello songs’, which was first performed at the Edinburgh Festival and also at Salford’s Lowry Centre.

Country Darkness is an album that all Elvis Costello fans should listen to in order to become reacquainted with the songs they hold dear and others they may have forgotten. Given the clarity of singing, it may also be the first time that they hear some of the wonderful lines so clearly on a recording. For those less familiar with the originals, it is a classy introduction to the work of one of the greatest lyric-led songwriters these islands have produced.

It is a shame that the album is being brought to light at a time when live performances are uncertain. A special one-off show at Bury’s The Met, due to be performed on 7th November, has now been rescheduled to Saturday 11th December.

I remember – c. 15 years ago – seeing Lou Dalgleish’s highly engaging ‘Elsie Costello’ homage show at Midlands Arts Centre, Birmingham. On that night, Michael Weston King was loyally on CD-stall duty. Let us hope that when live music returns, he joins his wife in his usual role, and gets happy at the microphone with Costello songs and Dalgleish/Weston King originals. The duo’s aim is undoubtedly true.

You can listen to, Country Darkness, here. Make sure to purchase your tickets for the rescheduled date here.

Keep up with My Darling Clementine: