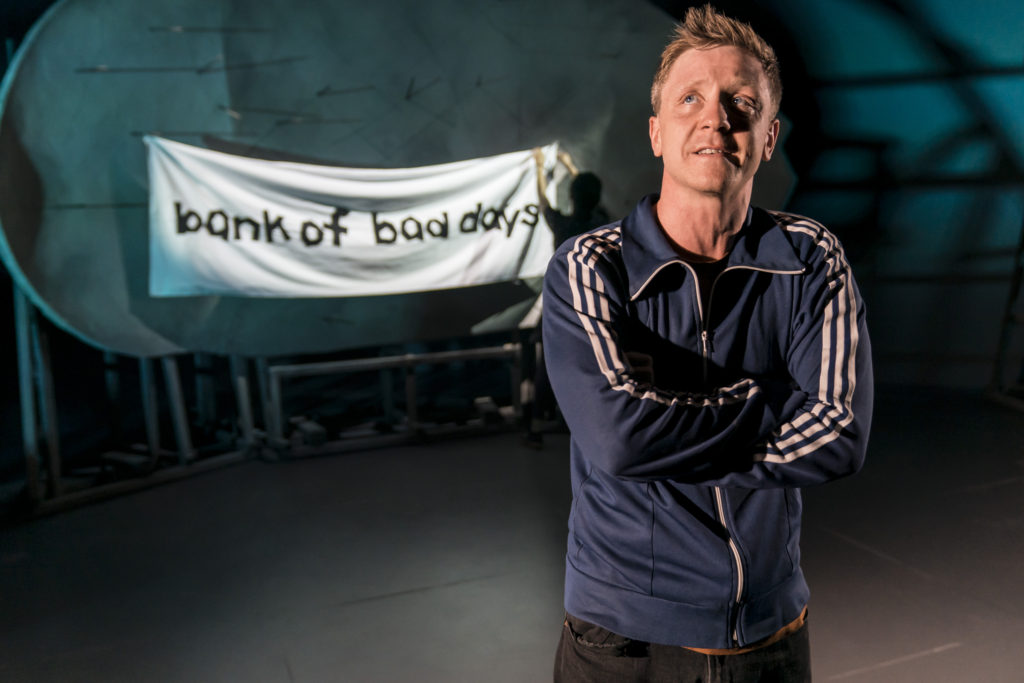 Inspired by the Sunday Times bestselling book of the same name, ‘Reasons to Stay Alive’ takes the audience on an emotional journey of euphoric highs and crushing lows, following Matt Haig’s painfully true story of his battle with depression.

Written by April De Angelis and reimagined for the stage by Jonathan Watkins, who was inspired by the book’s “theatrical potential” due to its “shifting relationship with time and the mix of a personal story with practical advice”, the show highlights many issues that society needs to address regarding mental health.

As the show opens, we see a younger Matt (Mike Noble) on the edge of a cliff in Ibiza about to take his own life. However, an older Matt (Phil Cheadle) manages to reassure him that it is not the right thing to do. Younger Matt then moves back home to live with his parents in England along with his girlfriend Andrea (Janet Etuk), however, we see depression and anxiety begin to consume his life.

We are later introduced to Matt’s mother (Connie Walker) and father (Chris Donnelly), who remind us of the dated, stereotypical British ‘chip up’ attitude to mental illness. Matt’s mother makes a fish pie as it is “his favourite and would always cheer him up as a child”, and Matt’s parents keep reassuring each other that “everything will be ok”.

One moment in particular which strikingly exposes the reality of living with a mental illness is when Matt offers to go to the corner shop alone to get some milk. As he arrives at the shop he suffers his first panic attack and shouts, “this isn’t a walk to the shop, it’s an Apollo 13 mission!”

The set and cast of the show are limited, but this isn’t really noticeable as they both adapt to the moving narrative and are utilised well. It means the production feels far more personal, which the story lends itself to.

The clever use of sound and lighting at times resonates with the inner turmoil of Matt. Slower movements and the sound of breathlessness make it feel as if you are experiencing your own panic attacks, and the pounding heart effects onstage depict the otherwise unimaginable levels of Matt’s anxiety.

The show does a remarkable job of breaking down stereotypes and stigmas about mental health, especially amongst men, and refuses to depict it with the sugar coating that we are normally all used to.

Whilst it plays on irony and at times has the audience in fits of laughter, ‘Reasons to Stay Alive’ also hits home about our tendencies to ignore mental health as an illness, which it addresses head-on with discussions such as ‘things that happened that generated more sympathy than depression’ and listing ridiculous suggestions such as, ‘living in Hull in January’, ‘breaking a toe’ and ‘consuming a poisoned prawn’.

The production kept the audience hooked throughout and was received with an enormous round of applause.