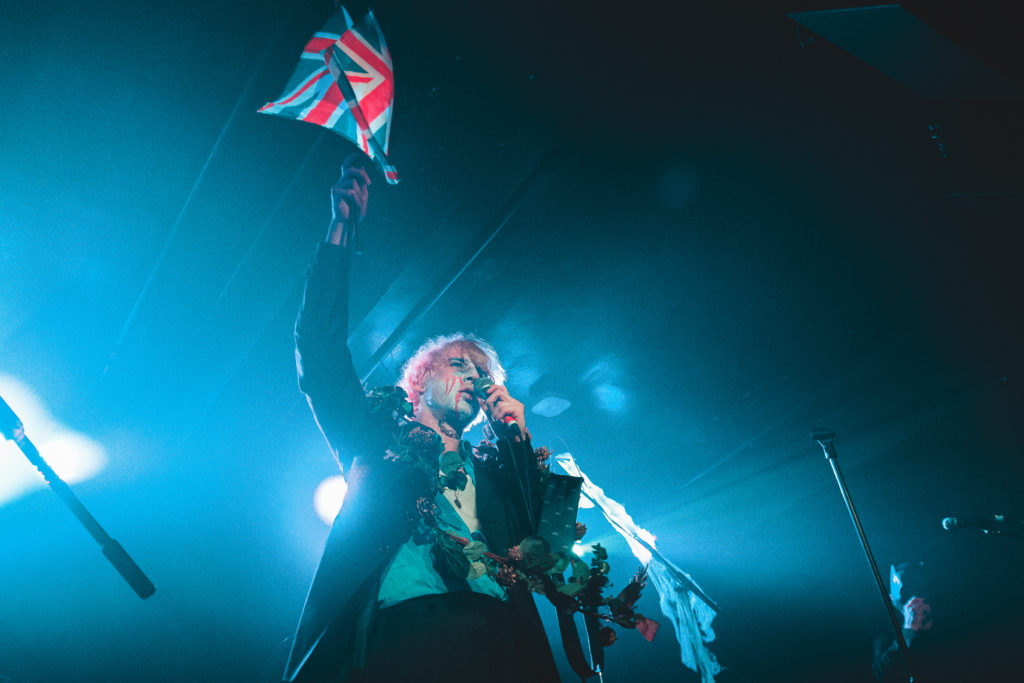 Words and Photography by Georgina Hurdsfield

Manchester Club Academy had a spooktacular night in store, as Spector headlined their biggest sold-out show in the city to date. With the stage adorned with pumpkins, cobwebs and a string of skeletons, it was clear the artists had gone to great efforts to make sure the crowd enjoyed spending their All Hallows’ Eve partying with them.

The audience had also pushed the boat out with their Halloween costumes, although some had more of comedic value to them than others. Luckily, the band members onstage had done exactly the same thing – what were Lucia & The Best Boys? Kiss with more of a satanic twist?

Lucia & The Best Boys brought a no f**ks given Glaswegian attitude to the show, layering an 80s punk twist over an indie-pop sound, which could be likened to bands such as Wolf Alice and Black Honey. ‘Cheap Talk’, the title track from their latest EP which was released in 2018, seemed to be popular with the crowd, mimicking the energy onstage. Lucia effortlessly cajoled the crowd towards the barrier. Whilst some climbed atop each other’s shoulders, others started mosh pits.

New single ‘Good Girls Do Bad Things’ cranked the energy up a notch – an anthem written for anyone who has been made to feel undermined or worthless by a man. It was a song clearly performed for the women in the room and brought massive Blondie vibes with its mix of rock and pop sounds. Its attitude was only matched by Lucia’s confidence, especially when she climbed the barrier to stare directly at those who stood before her.

Good things will come of this tour for Lucia & The Best Boys. It can only be hoped that their next show in Manchester will be a headliner, perhaps supporting the release of a new EP. We’re excited to see what anthemic power tracks they release next.

Headline act Spector soon took to the stage, adorned in Halloween costumes, of course. Much to the crowd’s amusement, singer Fred Macpherson dressed up as Boris Johnson dead in a ditch, a reference to Johnson’s claims a month previous that he’d rather be “dead in a ditch” than extend the deadline of Brexit from 31st October. If only the Prime Minister could have seen it himself…

Opening with fan-favourite ‘Bad Boyfriend’, feelings of nostalgia quickly set in as Spector’s fans sung back the lyrics. It was clear the band were excited to be back with a sold-out show and the fans were more than happy to be there. Still touring of the back of their latest EP, Reloaded, which was released in 2018, it was surprising that Spector didn’t play any of the songs from it at all. However, they did perform a handful of tracks from their previous EP, Ex-Directory, which featured crowd-pleasers ‘Fine Not Fine’ and ‘Untitled in D’.

It was only fitting for Spector to grace us on this particular night with the live debut of ‘Born in the EU’, released in 2016. Macpherson apparently needed help with the lyrics as he read off a sheet of paper “Marseille, Dresden, Vienna, Birmingham, Sofia, Monaco, Amsterdam, Oslo, Athens, Barcelona, Glasgow, Verona, Budapest, Gothenburg, Sheffield, Hamburg”, which he later threw into the crowd. Perhaps it would have been more entertaining with cue cards.

Later, the show featured a fancy-dress competition, where fans took to the stage to face a cheer-off for the best Halloween costume. Prizes included a generous bottle of apple Sourz, concert tickets to a show of the fan’s choice and a free item of merch. The well-deserved winners were a pair of fans who came as John Lennon and Yoko Ono. However, it’ll be hard to forget the nightmare-fuelled costume of Mickey Mouse that also featured onstage which had both the band and the crowd in stitches.

The gig finished with hit-songs ‘Chevy Thunder’ and a nostalgic live performance of the classic ‘All The Sad Young Men’. However, for some, the night didn’t end there – Spector soon took to the stage for a midnight set at Jimmy’s in the Northern Quarter.

Macpherson stated it was the band’s biggest headline show in Manchester to date, saying “we usually just play Gorilla”. We just hope that Spector continues to climb up the gig hierarchy to play bigger Manchester venues, which may perhaps come with a bigger sound. But for now, nothing can beat the Club Academy, with its intense and intimate atmosphere.

Following an all-round enjoyable show, it’ll be exciting to see what Spector offers up next. A new album maybe? Regardless, we know it’ll surely be fantastic.