You are here: Home / Uncategorised / “The Poets’ Poet”: Jean Sprackland on Elizabeth Bishop 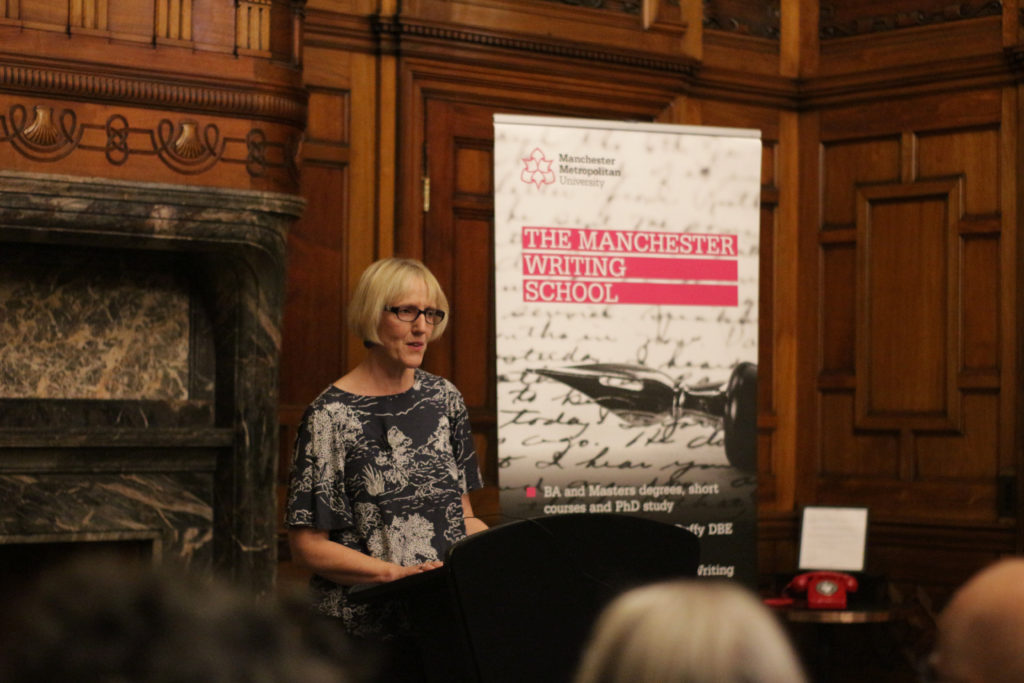 A sense of “homelessness and other reality” is what Elizabeth Bishop gives the reader, according to poet and Professor Jean Sprackland. The Creative Writing lecturer from Manchester Metropolitan University discussed Bishop’s poetry in Manchester’s iconic Principal Hotel last Thursday.

The event was part of The People’s Poetry Lectures series, an ongoing collaboration with Carol Ann Duffy and Manchester Metropolitan University, in partnership with Manchester Literature Festival.

The aim of the series is to present leading writers talking about their favourite poets. This instalment introduced Elizabeth Bishop to a wider audience and delved into her work as of one of America’s most influential poets.

Carol Ann Duffy introduced the event and Professor Sprackland, who went on to talk passionately about Bishop’s powers to make the reader see what Bishop observed and understand her “rootlessness”.

Bishop had a really rough childhood as she was separated from her parents but you won’t find any self-pity in her work, as Jean explained: “The early dislocation set a pattern: as an adult, she moved restlessly from place to place, living in more or less temporary surroundings, and travel remained vitally important throughout her work.”

Jean further described that we can hear the sense of her own rootlessness in narrative, observation and form of the poems. Sprackland explained, “She notices everything. You feel like you’re being led by another human being into her world to see what she sees. And experience what she experiences.”

Bishop won the Pulitzer Prize winner for Poetry in 1956 and went on to become the first female poet to received the Neustadt International Prize for Literature in 1976.

aAh! spoke to Sprackland about gender politics in Bishop’s work. “Even though she wasn’t a political poet, she did of herself as a feminist. Sometimes she had been criticized for not being political enough,” she explained. Sprackland added, “For instance, she didn’t want to have her anthology in Women Only Poets and although she was a lesbian, she wasn’t really out.”

The context of the time she lived in as a lesbian poet is something to be considered when looking at her work. Jean Sprackland adds: “All of these feelings were probably a part of the ‘outsiderness’ that she had, but they weren’t really explicit. We would probably expect those aspects much more explicit in her work now. I think she felt like she had to keep her sexuality hidden.”

The audience who came to listen to Sprackland’s alluring lecture were varied – creative writing students as well as Literature lovers from far and wide made up the crowds, keen and interested to learn more about Bishop’s work. The youngest member of the attendees was a college student who said she came to the event because she was “fascinated by one of Bishop’s poems” that she had read for her exams.

One of the aims of the Manchester Literature Festival is to bring literature to a wider audience, according to Director Cathy Bolton. “It’s quite an eclectic programme that we have and we’re trying to have things in the programme that will appeal to different audiences.” Manchester Literature Festival holds a series of lectures about past poets and writers, but also focuses on contemporary authors and tries to build an audience for the new ones.

“The unique aspect for me for tonight was to hear about Bishop’s work more in-depth. I was thinking about how her approach might have been radically different if she lived a bit longer or if she lived in a world where she did feel like she could use her own life as a material for her poetry,” added Cathy.

Bishop was often referred to as a “Poets’ Poet” because fellow artists saw themselves reflected in her. When aAh! asked Jean Sprackland what kind of advice did she think Bishop would give Manchester Met Creative Writing Students if she was alive today, she said Bishop would be quite tough. “She would be interested in the idea that you need to learn about the technical aspect of writing poetry, not just sit there and write down what you feel.”

She added, “It’s an art but there is a craft to it – and you learn it by reading the poets you love.”

For more events from the Manchester Writing School, visit www.manchesterwritingschool.co.uk/events. The next event is Rewriting the North: Poetry, Fact and Fiction with Blake Morrison and Helen Mort taking place on 28th November, 2019.