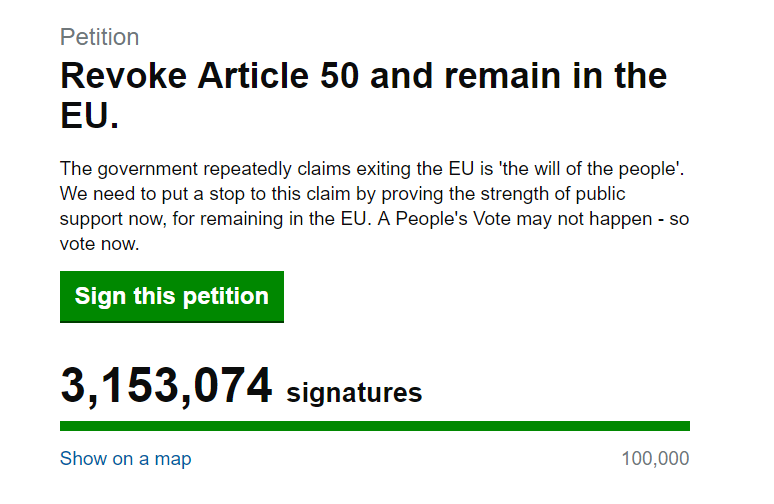 Over the last day or so, a petition calling to ‘Revoke Article 50’ has reached over 3 million signatures.

When a petition reaches over 100,000 signatures it has to be debated in the House of Commons.

EU leaders reached an agreement to delay the Article 50 process, postponing Brexit beyond 29th of March. If British MPs approve of a withdrawl deal negotiated with the EU next week, the UK will be offered a delay until 22 May. If the deal is unapproved, then the delay will only be until the 12th of April.

The petition has garnered a lot of attention, with the Petitions Committee tweeting that the rate of signing is the highest the site has ‘ever had to deal with’.

Unboxed has created a heatmap that shows where the signatures are coming from , and the percentage of people in constituents signing the petition.

Data yesterday from the petitions website suggested that over 1.3 million signatures of the petition were from people outside the UK, with 10,000 from France, almost 6,000 from Spain and 4,000 from Germany.

A spokesperson for Prime Minister Theresa May has said that “she will not countenance revoking Article 50. The PM has long been clear that failing to deliver on the referendum result would be a failure of democracy and a failure that she wouldn’t countenance”.