You are here: Home / Culture / Review: TORUK – The First Flight 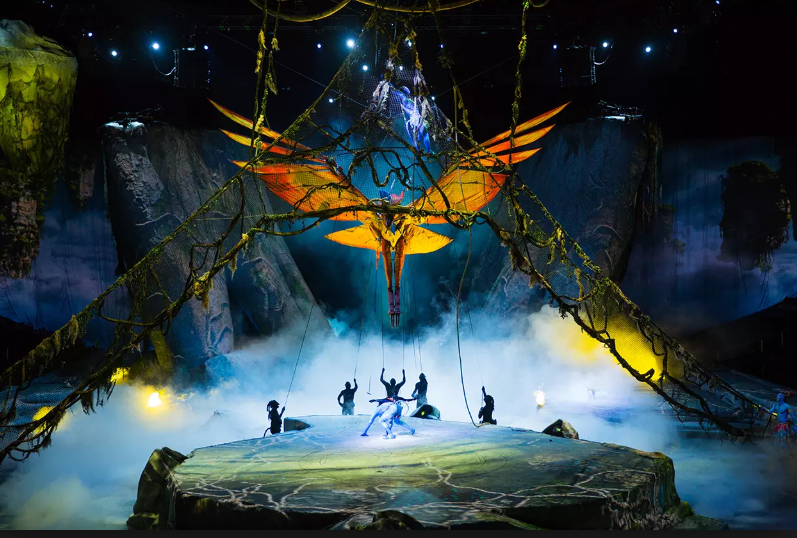 For years I personally believed that James Cameron had a near spotless record of productions with one exception being the 2009 film Avatar. I was left feeling disappointed with this film despite its amazing and awe inspiring graphics due to what felt like a lack of substantial narrative. For years the name of this film left a sour taste in my mouth as I believed that it tried to gain fame and adoration through visuals only. This was true until I watched TORUK – The first flight, and suddenly I saw that the universe of AVATAR was more complex and evolved than I had previously thought.

Perhaps the most brilliant and astounding feature of the show was, much like the original film, the visuals. Not only were the acrobatics and choreography of the performers of the legendary Cirque du Soleil troupe magical and astounding but the lighting and set visuals were absolutely beautiful and jaw dropping at even the tamest of moments. Even when waiting for the show to begin the visuals that were displayed were beautiful, almost resembling starlight being splayed across the ground eventually swirling together like a maelstrom whirlpool signalling that the show would begin and introducing the Na’avi narrator.

The lighting and visuals were coupled perfectly with the choreography of the performers. Mixing fight choreography with stunning acrobatics using both silks and apparatus throughout the performance. Trying to pick the most impressive part of the performers efforts is impossible in due to the fact that there are various different styles of acrobatics that are pushed to their limits to achieve some of the most transcendent sites that I have ever seen. This coupled with the emotionally charged tribal styled music that is played throughout the show, leaves the audience feeling as if they are viewing actual life and leaves you wanting the show to continue forever.

The music that fills the performance is powerfully eclectic as it has a tendency to move from a calm serenity into a raging crescendo at a moments notice, the audience become more invested in the piece almost believing to be part of the various Na’avi clans. The vocals of the various performers are shown to be extremely emotional from how they are spliced with various cries of anguish and pain by those who sing, piercing the hearts and making those who hear them begin to feel tears in their eyes.

Possibly one of the most impressive and immersive points of the show was enacted by the brilliant and poignant skills of the puppeteers that work on the show. If it weren’t for their abilities then the most important part of the show would not be able to be utilised in the its best way. I’m talking of course about the great TORUK itself. Throughout the show I was sat waiting to see the last shadow make its appearance and it was more than worth the wait as it entered the stage in a great and terrifying movement. Almost convincing the audience that It could be real. From its realistic movements to its great and imposing actions. It is extremely easy to understand why a people would be terrified of something like this as even though this is a facade made of fabric and sticks, it was terrifying to see and behold as it beat its mighty wings and called in a mighty cry.

The performance itself is magnificent. Pulling a cast of talented and skilled performers from various countries together and using them to the best of their abilities creates a show that should be seen by all. This has created a piece that will more than likely stand the test of time from the initial Omatikaya clan initiation choreography to the tree of souls with its beautiful visuals and lighting.