You are here: Home / Culture / Interview / Music / Spotlight On + Interview With Baltikk 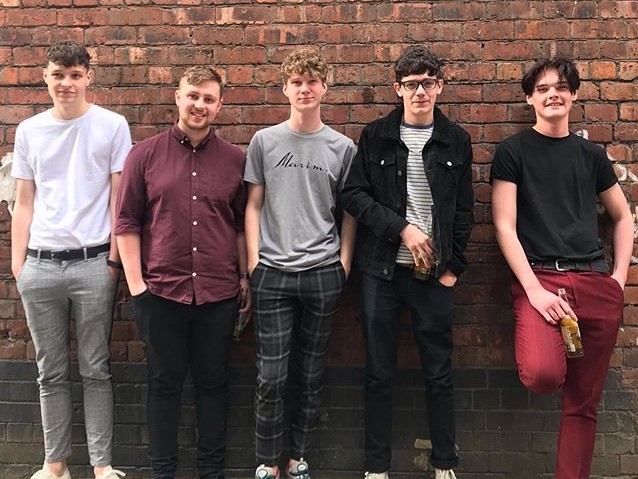 Introducing Baltikk, the latest band planning on topping the indie charts. Formed in October 2017, the Manchester-based five-piece is made up of vocalist Harry Edwards, drummer Sam Sumner, Daniel Littlemore on the bass, and last but certainly not least, guitarists Joe Ball and Kyle Bebb. Despite having only recently emerged, however, this band lacks nothing when it comes to musical expertise, as will become apparent, boasting multiple multi-talented instrumentalists who add to the versatility of their writing process.

It is a well-known fact that you can only get anywhere with hard work, and this is a mantra which the members of Baltikk have apparently taken to heart. Despite being students, they all also hold down jobs in various industries alongside their musical endeavours – they’re clearly not afraid to graft for what they want, and their relatable, largely ordinary lives allow them to connect with their fans. Contrary to their name, this band thrives on creating a warm, friendly atmosphere, and their live shows are never anything short of intimate. They proclaim that “indulging the audience is our main priority,” and it certainly shows.

Their debut single, ‘Darling’, shares a producer with fellow rising hit-makers, The Night Cafe. It makes sense that a band would wish to attempt to follow in the footsteps of the current indie-rock dominators, but this band clearly doesn’t plan on merely shaping a career as a second-rate, rip-off Night Cafe impersonator group. ‘Darling’, released on the 20th of April, was played on Northern Quarter Radio, and managed to rack up over 1000 streams within five days of its release, supporting the notion that the band are aiming to forge their own paths from the ground up. They’ve focused on building a base around Manchester’s own grassroots venues – alongside adding Jimmy’s, The Bread Shed and Retro to their live venue resume, they also recently experienced their first slot at Dot To Dot festival at The Brickhouse Social.

We were lucky enough to get the opportunity to chat to the lads behind the music, nestled in the cosy Slug & Lettuce on Deansgate. At first glance, the range of musical tastes within the band was obvious. From the classic indie dreamer aesthetic embodied by Harry Edwards in his patterned shirt to Joe Ball’s punk-inflected leather jacket, their obvious love for music comprises one of their core strengths.

Some of the questions have been edited for brevity and clarity.

Q: How did you settle on ‘Baltikk’ as the name for your band?

Daniel: “We were in a Wetherspoons a couple of years ago, before all of us worked, and Joe said he wanted a drink which was the cheapest beer but with the highest percentage of alcohol, called Baltika 7, and it was an awful beer. We said we’d call the band after it as a joke and we did. It was Baltika for a bit but because of copyright we changed it.”

Daniel: “So we changed it and knocked the ‘A’ off and because there was a band in 1973 which had the same name so we just added an extra ‘K’.”

Q: How did you end up forming a band together?

Harry: “We all met in college basically 2 years ago.”

Sam: “Actually, real story: we were already a band. We started a band towards the end of our first year. Me, Joe, Kyle and Dan, and then our singer left so we needed a new one. Then Harry came along.”

Kyle: “Harry was in a different band at the start of this year.”

Q: How would you describe your sound? Which bands do you admire, and how have they influenced your music?

Kyle: “We’re all into different things, to be honest.”

Harry: “I would describe the sound as ‘indie’.”

Daniel: “With a bit of funk. It was a bit experimental at the start, going a bit indie mixed with funk.”

Kyle: “There are reggae influences too.”

Daniel: “We started off as indie reggae, sort of thing.”

Harry: “I reckon our influences are Catfish [and the Bottlemen], Arctic Monkeys, things like Sticky Fingers who are the reggae kind of vibe. Then there’s like Joe [Ball] who listens to all punk and stuff, old-school guitar sounds. Like some of the guitar riffs in our songs are guitar-orientated.”

Q: Have you had any challenges to overcome, and how have you handled them?

Sam: “The recording and trying to sort that out.”

Harry: “We were under a development plan with a thing, it was a great thing to have.”

Kyle: “But there was a lot of faffing about.”

Sam: “A lot of it never happened but we got a recording for free, and we recorded our first single on that. Which sounds good.”

Harry: “But it took six or seven months.”

Kyle: “We did all the recording within a day.”

Kyle: “Definitely worth it.

Q: Have you ever had to deal with any gig malfunctions, and if so, what did they teach you all about performing live?

Harry: “Almost every single gig, like when the mic cable comes out of my mic.”

Harry: “Maybe not every single gig.”

Harry: “We’ve had malfunctions of being too drunk.”

Sam: “Yeah, but it happens though, doesn’t it?”

Q: What song is your favourite to play live?

Kyle: “I can never remember the name of it, the new one.”

Kyle: “The one we’re going to record first, ‘Walk Away’.”

Harry: “Upbeat summer songs, which are going to be released soon.”

Daniel: “They’re the ones which are solidifying the sound, aren’t they? We made them one after the other. We made one, realised we liked the sound of it, and then we just ended up adding similar songs to it. Same vibes but a bit funkier.”

Q: Can we expect to hear any of these new songs live at your next gig, supporting Broomhead with Broke Casino?

Harry: “Definitely. Both of them.”

Q: Do you have any other new additions to the setlist as well?

Harry: “We changed it because we’ve always used the last song which everyone can get involved with.”

Harry: “But we’ve altered our set around for this gig at Night People, so it’s going to be a new set.”

Q: Is there a primary songwriter within the band, and do you have a process?

Sam: “We’ll make our own stuff up after.”

Harry: “I’ll go and write some chords, or Kyle will write some and give them to me, and I’ll write lyrics over it and bring it to the band rehearsals.”

Daniel: “Then everyone will put their own spin on it.”

Sam: “We’ve started just throwing some tunes together and freestyling some bars.”

Harry: “Within rehearsal, we’ll just be playing about with random shit, and then some will actually work.”

Daniel: “Sometimes it’s a bit of planning or sometimes it’ll just happen in the complete spur of the moment.”

Sam: “It depends what mood we’re all in.”

Q: When you’re recording, is there a sound you wish to capture?

Harry: “When we were recording ‘Darling’, the producer which we were using was the same one used by The Night Cafe. I really liked their sound and used influences from them with the drums and stuff.”

Sam: “Target was making sure everything sound good and perfect.”

Daniel: “Using Night Cafe’s sound like a guesstimate, of finishing it and mixing it up to make it our own.”

Q: As for ‘Darling’, how have you found the response to it, apart from being played on Northern Quarter Radio?

Harry: “It got loads of streams quite quickly, we hit a 1000 streams in five days, which I think for our first song is alright.”

Sam: “We don’t really have a big following.”

Kyle: “The best thing is because people like ‘Darling’ so much, they’re actually looking forward to us bringing out the next tune.”

Sam: “The hype’s still there.”

Q: Is there a timescale you’d like to bring your next tune out in?

Harry: “We’re going back in the studio very soon.”

Daniel: “Are we doing one or two?”

Harry: “We’re hopefully planning to bring one out in July and then another one within the end of summer, so we can keep it going.”

Q: Have you got any more festivals or gigs planned?

Kyle: “Not really at the moment.”

Harry: “That’s it for the moment.”

Daniel: “We’re speaking to people at the moment but haven’t finalised.”

Harry: “We need to find out what happens.”

Sam: “We’re focusing on the tunes at the moment. Gigs will come from that.”

Kyle: “We can release some more music.”

Daniel: “I think for a festival you’re a bit more relaxed than usual.”

Harry: “You just get into it.”

Daniel: “It’s all the excitement which comes with it.”

Sam: “It’s a bit more intimate at a gig, everyone is up close to you. At a festival they’re quite far back, so you don’t care as much what you’re doing. You go for it a bit more. As at gigs they’re looking at you a bit more, makes you a bit shy.”

Daniel: “A festival is a bit more of a show than just a gig.”

Q: What would you feel is your unique selling point as a band, in a couple of words?

Harry: “Kyle was probably the unique selling point because his face is beautiful.”

Sam: “He even does the occasional backing vocals.”

Kyle: “Lads from Manchester who like to get pissed.”

Sam: “We’re just the same whoever it is, it’s not like we put a front on.”

Harry: “There are people who put a persona on.”

Daniel: “We’re the same on or off stage.”

Joe: “We’re all into different things and we don’t sound like anyone else. It’s so unique.”

Q: Finally, what can we expect to hear from your live performances?

Sam: “All the other good words.”

Q: Any final words to add?

Baltikk is a band striving to get somewhere, and we can’t wait to see what they do next. Catch them at their next gig on Friday 21st of June alongside Broke Casino, supporting Broomhead at Night People. With their indie feel-good tunes and the intimate atmosphere provided by Night People, it’s surely an event not to be missed. Purchase your tickets here for the purse-friendly price of £6 in advance or £7 on the door.

Be sure to keep up with Baltikk: