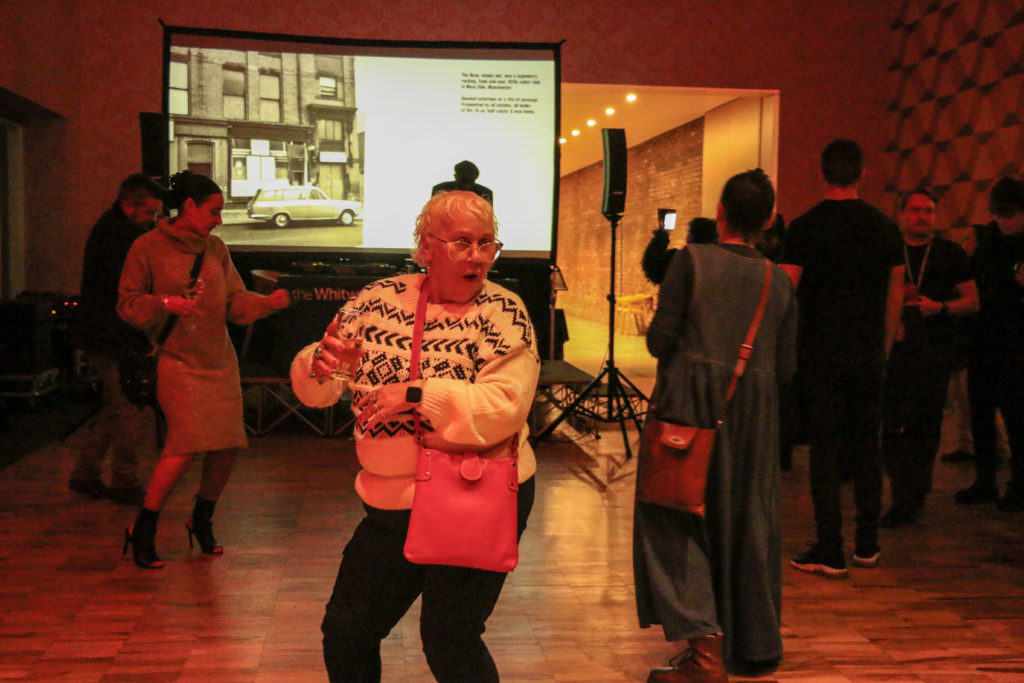 The Reno – a safe space in an “unsafe” neighbourhood

The funk and soul cellar of Moss Side in the 80s was packed with iconic regulars, MPs and individuals like ‘Hurricane’ Higgins; all dancing to the beats of DJ Persian.

The Reno’s iconic atmosphere returned to Manchester with the launch of Linda Brogan’s book about the club, Excavating the Reno, on Thursday at The Whitworth.

The Reno was an essential part of Mancunian subculture, which is why in 2017, a group of Reno regulars led by an award-winning playwright Linda Brogan, decided to excavate the building, which was demolished in 1986. They found treasures such as lipsticks, pieces of the dance floor and even a sack of weed.

The Whitworth gallery then established an exhibition around the history of the club and the whole process of its excavation. You might ask what the reason behind digging into the history of an old club from the 80s. The answer is – stories.

Coming from one of the poorest neighbourhoods in Manchester, the fascinating life stories of the Reno regulars are captured in the memoirs which Brogan collected. The ‘children of the 60s’ who frequented the Reno were mostly from mixed-race families, often facing hatred and racial discrimination in Manchester at the time. Although there was gun and gang violence in Moss Side, the Reno was a spot which gave them a “sense of place”, as described by one of its regulars, Susan Mousha.

“Even though there were drugs, gambling and it was in the middle of the night, it was always safe. They were the same mixed-race people, like me, and we all cared for each other and looked after each other,” Susan said.

“I came here tonight because this is just the legacy of it all. If you’re a part of something, it can live on.”

Susan Mousha added that she was saddened by the demolition but understands things simply change: “It’s not gone though. It’s still here – in our hearts and memories. That’s what Linda captured by this whole project.”

She came with her niece Riya, a fine art student and has been engaged in the project as well. “I’ve been helping out Linda Brogan for the past weeks and it’s been great,” Riya said.

“The whole goal tonight was to reverse the Reno atmosphere. I was raised in the area of Moss Side and the community. It is very empowering as a woman of colour to be here and to be proud of my background.”

The artefacts gained from the excavation together with the photographs and memoirs are exhibited at the Whitworth until April 2020. Looking at them, it’s easy to understand Linda’s touching quote about the club: “To us ‘half-castes’ born into the 1940s or 50s, ‘no blacks, no Irish, no dogs’ – it was home.”

The author of Excavating the Reno said she wanted to write a Reno play for years, but couldn’t capture the nuances. “Instead, I harvested the Reno itself.” For that, Linda Brogan won The MCR Culture Award this year.

The event on Thursday attracted lots of curious visitors who wanted to experience ‘the Reno vibe’. Whitworth’s event space room was packed with some of the club’s regulars and their families, as well as lots of young people impressed by the story of the club.

The artists from the Royal Exchange Theatre were among the attendees and said that the history of the Reno has been something they’ve been really interested in.

“We’ve heard from the older generation about how it’s been a hub for culture here and about the amazing experiences and people from a lot of different cultures getting together and dancing,” they said.

The event met Brogan’s purpose of celebrating the unity as well as the Mancunian diversity which Reno represented while it was alive. To find out more about this unique project, have a read on the author‘s website.