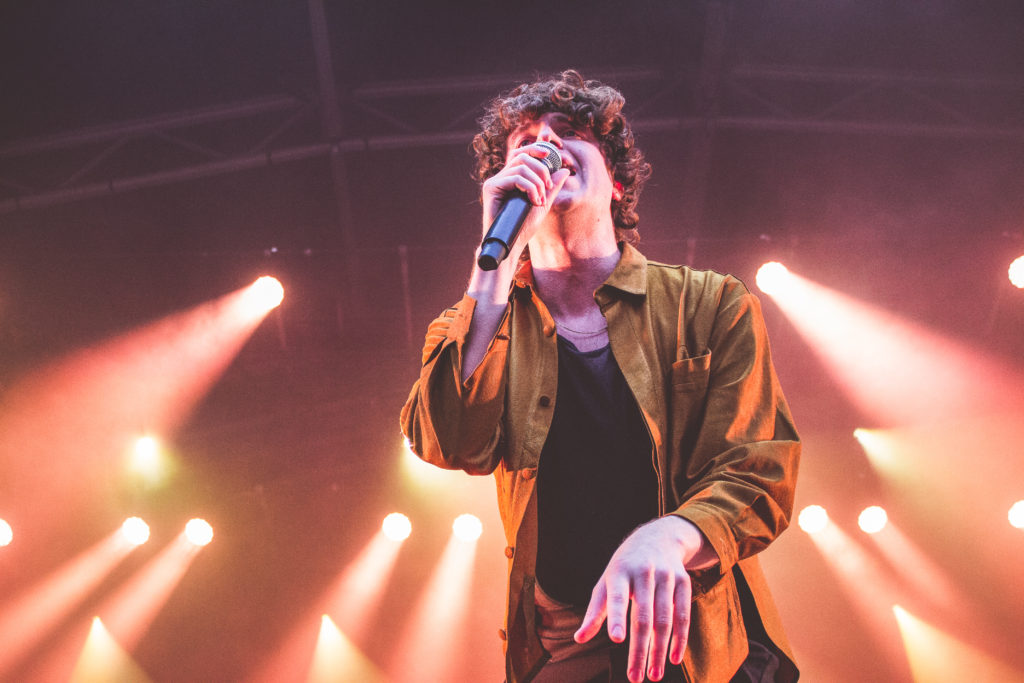 If you can find a ‘Best Of Noughties Indie’ playlist that doesn’t feature at least one Kooks track, we will eat the nearest hat. The charts are littered with Sheeran and Swift. Only Stormzy gives relief. Seeking substance, we turn to Best Of playlists: now available on all good streaming services. And it is through this phenomenon that noughties indie is rearing its scruffy barnet once more.

Frontman Luke Pritchard describes the 2018 album as “meat and veg”. If Sheeran is yer soggy beans on toast slathered in that sweet red sauce and Stormzy the avocado on yer sourdough, then The Kooks are feeding the full family, dishing out meat and veg at the carvery.

Steady, studio-faithful tracks and well-timed crescendoes on guitar and drums. Pritchard’s showmanship stretches across this stage and doesn’t snap, it gains more give for the tour through UK festivals and across Europe, America and Australia. Certainly putting in the legwork, these guys mean business.

Castlefield Bowl. Trees, canopies, hillside, sunset. A slice of festival spirit smack bang in the centre of the city. An open-air venue, the neighbours made the most of it, hanging out the balconies of flats above a restaurant and out back of a canal-side bar. A colourful choreographed light show ran in line with every song on the setlist, bringing the stage to life.

A wholesome Manchester crowd, barely miles from the tension of Life at Heaton Park.

The Sherlocks warm up the crowd nicely with a reassuringly raw set. The strength of their sound as a whole somewhat overwhelms the vocals and leans the band towards the grungier side of indie. By the end of their set the crowd are joyfully loose. With a pedal flourish, the band reach to touch the hands of the fans at the front.

A fair while to wait for the main event but with Castlefield Bowl verging on picturesque and the Tibetan dumplings pretty tasty, the wait was certainly bearable.

Pritchard bounds on stage with enthusiasm and the fans reflect it right back at him. Kicking off with the obscenity of ‘Always Where I Need to Be’, the packed out venue hums with a happy energy. Tempo slows, lights turn blue for a brief relief then the drums kick in and Luke grabs a guitar to strum through a fiery light show of “Did you see the way she looked at me?” down the barrel of ‘Eddie’s Gun’.

“We’ve waited so long for this. It’s the biggest Manchester show we’ve ever played. We love it here, it’s a hub of rock ‘n’ roll. We love you so much … Right! Now we can get even crazier!” Screams from the crowd as we dance and burnt rainbows waft up our noses. It’s worth it for the prettiness of the smoke red purple and blue, rising from the very large, very happy pit that bounces as one.

Pritchard runs across the stage with his guitar to more screams and he calls for us to sing, “All together now!” Switching from acoustic to electric, we twang into the lalalas of ‘Sweet Emotion’. Drums pound, couples smile and he tells us, “It’s about not letting the dickheads get you down. Don’t do drugs, kids”. And they can’t anyway, as he tells us in their next song ‘Four Leaf Clover’, “the drugs are gone”. The light show continues to seamlessly accompany the set with an on-the-nose stage full of green.

We jangle into ‘Daft Family’, the couples cuddle and big brother Pritchard tells off the a pair in the pit threatening to fight, “Have you guys kissed and made up yet?”

Bringing it down with a ballad, Pritchard reveals: “We get inspired by different people and we’ve been working with a gospel producer so there’s the influence of that on here. My Dad died when I was young so this song is dedicated to anyone that relates to that”.

One heartfelt ballad melts into another as arms sway overhead and the sun starts to set behind the stage.

Keys tinkle and the lightshow goes Yellow Pink Green. A cowbell offsets the guitar funk flavour for ‘Forgive and Forget’ then we leap into a punky staccato track. Everyone bounces for ‘Shine On’, which Pritchard dedicates to the “kids in hospital beds” to whom the show is streamed live. “Erin in Chester, Lee in Nottingham, Laura in Georgia and Princess Lexy in Oregon, that was for you.”

Lift up your phones! So we do. The effect is magical. The lightshow glows orange and turns the phones into flares. That’ll look good on the telly.

Darkness is falling and the crowd’s energy soars for ‘Do You Wanna’. Parts of the pit now stand three shoulders high, a train rattles across the bridge over the stage. Bound for the airport, it looks as if it will ride straight into the night’s bright moon.

We know it’s a tease. ‘Junk of the Heart’ is not the last song and we wait full seconds for the encore including ‘No Pressure’ and much-anticipated ‘Naive’.

So The Kooks are back, with a set that is well-thought out and thoroughly rehearsed. This indie comeback know what their people want and they are delivering.

And what more could your average Kooks fan ask for? More punch, more fire, more playfulness? Maybe later, when the band can rely on this fresh following to stick around if things temporarily go a bit Gilmour.

Pritchard has previously shared his ambition of a lifetime career a-la-Jagger and co. With a crowd-pleasing setlist, a wide-reaching tour, and cross-generational appeal, they might just do it.