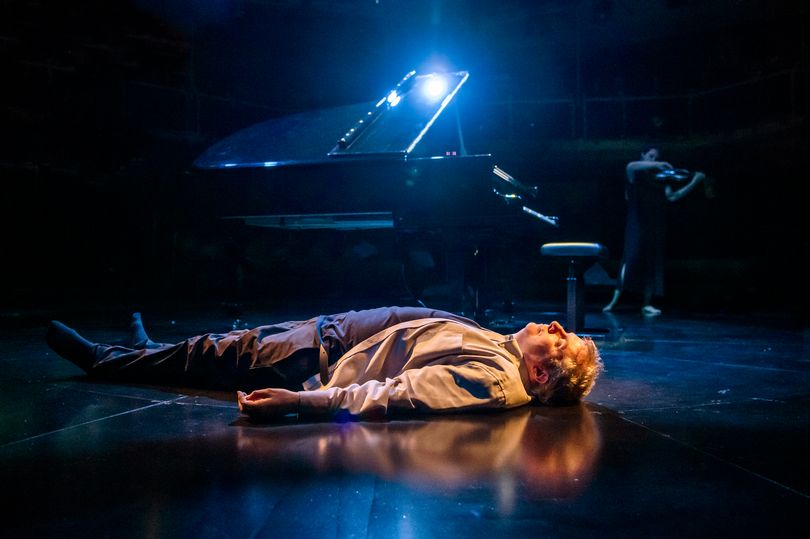 As the house lights go down in the Royal Exchange Theatre a single spotlight remains lit, picking out a middle-aged man in the front row, who seems oblivious to the light shining on him. A minute or so of confusion follows as the audience nervously giggle amongst themselves, wondering if this is some sort of malfunction until the man begins to speak, revealing himself to be Phelim McDermott – the director of the show, and as it turns out, the narrator and sole actor.

What follows is a beautiful tapestry of fragmented scenes that layer story, make-believe, philosophy, magic and musings on the nature of creativity. Ten new Philip Glass compositions accompany the visually arresting narrative, adding sublime layers of mood and texture to the storytelling. We learn that McDermott has had a lifelong obsession with creating a piece to Glass’s music and, aided by three puppeteers and a small ensemble of musicians, he acts out his journey through a collage of different vignettes, each enhanced by ingenious use of props and lighting: puppets formed by tissue paper, a self-playing piano, giant concentric metal rings that rise and fall above the stage, a cascade of sheet music tumbling from the lighting rig, a cat’s cradle of Sellotape that first encircles then traps McDermott. Each scene is astonishing in its design and execution.

There is a main thread that runs throughout the piece and joins together what on the surface look like disparate fragments. McDermott explains the Japanese art of ‘Kintsugi’, a technique whereby broken vases are repaired by a golden glue, thus making a new and more beautiful object out of broken pieces. As a metaphor for the show this works perfectly as the Tao of Glass was born out of an abandoned attempt to bring Maurice Sendak’s ‘In The Night Garden’ to the stage – a production that never saw the light of day due to Sendak’s passing just months after their initial production meetings.

Glass himself appears in the final scene to play piano and the standing ovation at the end is thoroughly deserved for this enchanting and brilliant story about our journey through life, the threads that hold ideas together and the music that is adored by millions worldwide.