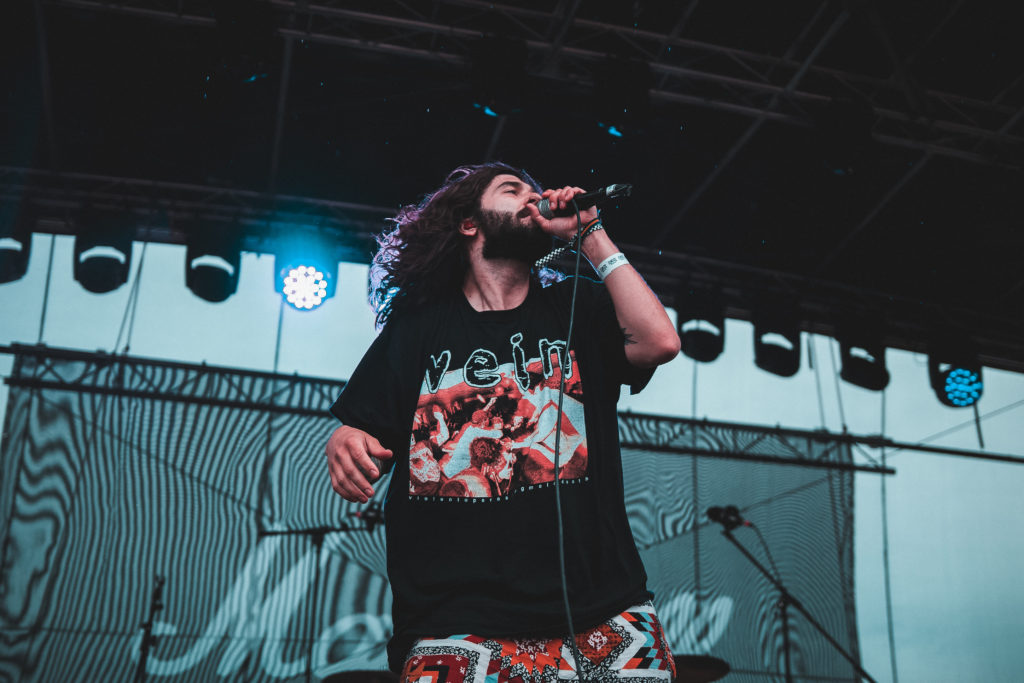 This year’s northern edition of Slam Dunk felt notably more festival-like than past installments. Subverting the inner city setting for the greenery of Leeds’s Temple Newsam Park, it really seems as though the events team at Slam Dunk are seeking to assume their place amongst the festival season’s big players.

Kicking things off for us were Oldham County’s own Knocked Loose, who offered no means of easing attendees into the proceedings gently. The band’s seemingly endless touring schedule, whilst presumably exhausting, has transformed them from hardcore/beatdown upstarts to a well-oiled machine fit for the huge festival crowds they’ve grown accustomed to. The 5-piece power through a punishingly visceral set with the crowd screaming back near enough every word.

Turnstile were up next, eliciting a shift from the melancholy side of hardcore to the soulful. The band’s aesthetic has moved from what is conventionally expected from a hardcore band to something akin to a revival of 1960s counterculture. Frontman Brendan Yates commands the large crowd with a presence that unifies that of Jim Morrison and Mick Jagger, with an exuberance that has come to characterise Turnstile’s positive energy. In a manner not dissimilar to Knocked Loose, the band also prove that they are just as comfortable in front of festival audiences as they are in clubs and basements.

Over on the Dickies stage were Scranton’s Tiger’s Jaw, delivering some of the warmest indie/punk Pennsylvania has to offer. The band powered through a set of highlights from across their entire discography and did so with charm and charisma. Fortunately, the rain also held off for the duration of this set.

Moving to the Key Club stage we managed to catch rising metalcore stars, Employed to Serve. Garbed in matching jackets, they proved themselves to be a force with a sonic arrangement to match their uniform. These guys have been garnering an increasing level of attention over the past year and today’s performance made it easy to see why. Those not familiar should definitely consider making themselves so.

Retreating back to the Impericon stage, we caught London’s own Gallows for their long-awaited return, following a four-year long hiatus. In the current climate, Gallows’ message is one that’s urgently needed now more than ever. Their 2009 album ‘Grey Britain’ bears as much significance today as it did when it was initially released – if not more. However, the band seldom took the time to allude to this fact, and as much as one may be able to respect a band’s prerogative to detach themselves from political matters, Gallows’ very platform is one that’s established upon a sense of disenchantment with British politics. To see them appear so ambivalent in a time of such division was surely disappointing.

On the stage on the immediate opposite end of the tent were Atreyu, who powered through a set of glam rock infused metalcore. It’s clear that Atreyu are a band that have got so lost in their own pursuit mass appeal that they have found themselves more out of touch than ever – if their Bon Jovi cover is any indication.

Glassjaw were soon to follow. It’s a rare opportunity to catch the post-hardcore titans live, so it felt like a profound privilege to be able to do so. However, musicianship took precedence over showmanship, with the energy being considerably stripped back for this performance compared to those who preceded them. Despite this, the band churned out hypnotic hit after hit including ‘Tip Your Bartender’ and ‘Mu Empire’.

Despite the unprecedented rainfall, Slam Dunk brought all the warmth and energy one could desire from its eclectic mix of pop punk, metal and alternative rock. If the trajectory the festival has been on for the past few years is any indicator, next year should prove to be all the more memorable.