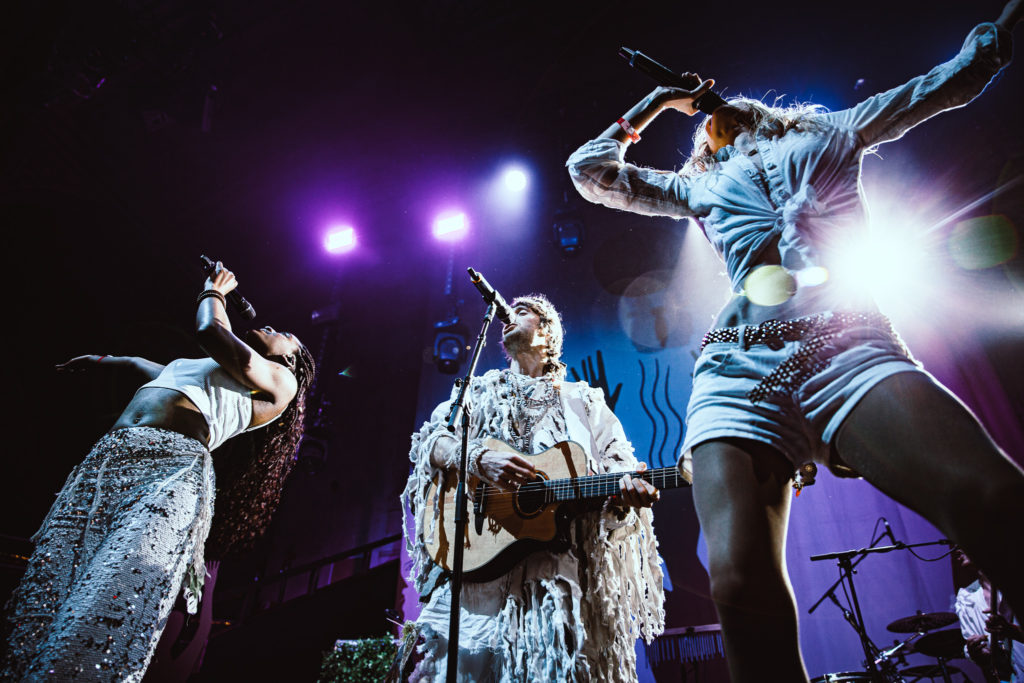 Variety is the spice of life, and this is something which the curators of Dot To Dot clearly took to heart while keeping the festival running since its debut in 2005. The Friday leg of the 3-day festival, which began in Manchester over the bank holiday weekend, didn’t disappoint in its aims to showcase the current movers and shakers within the music industry. The festival has previously pulled in renowned artists such as Ed Sheeran, The 1975 and Sundara Karma, which left expectations for its 2019 edition understandably high. Fans could witness a range of acts, from Swim Deep keeping the indie scene alive to Jordan Rakei ‘s R&B and jazz fusion. Throw in Crystal Fighters’ electrical performance for good measure, and you have all the ingredients for a delectably diverse festival.

Punk rock blend band Dream Wife was the first band set to wow audiences at Manchester’s famed Albert Hall. The ex-Wesleyan chapel, featuring beautiful stained glass windows. has found new life over the years as a music venue, and was the perfect addition to the multi-venue festival. As The Independent have stated, the festival “is proof that you don’t need to pitch a tent in a muddy field to get that festival feeling”. This proved all too true as the lights dimmed down, and a cheer rippled through the crowd as the band opened with the loud but proud number ‘Hey Heartbreaker’. If this band was a colour, they’d be something neon, as they demand to be heard. As Icelandic lead singer Rakel Mjöll rested her foot on the speaker, staring out and challenging the audience to not to join in, fans at the barrier needed no cue to release their inner beast to the high powered track. This attitude was evident throughout the set, as their songs combined effectively acted as a battle cry, calling for an ongoing challenge the status quo. This was best embodied in the inclusion ‘Somebody’, which is Mjöll’s favourite track due to it being a ‘f*** you to gender’. Final track, ‘F.U.U’, also deserves a special mention, as it saw the front members of the audience brandishing their middle fingers in appreciation of the band. Dream Wife is one of those unique bands where the strong relationship they hold with their fans is blatant, and makes for a live performance filled with energy. Their obvious goal is to translate the attitude from their recorded tracks, but with a slightly raw, rough-around-the-edges appeal for which their fans love them.

Indie legends, The Night Cafe, have progressively been going from strength to strength lately, and their set at Dot To Dot proved no exception. Vocalist Sean Martin’s sweatshirt, brandished with a large Circa Waves logo, reminded us of their recent support slot with the band and demonstrating that this band is really going places. From opening track, ‘The Way of Mary’, it was clear that they were bringing their hits to the Albert Hall, and from the first drum roll, their set was going to be smooth sailing as the audience lapped it up. The standing crowd from the barrier towards the back could be seen with all limbs flailing to the melodic beat, accompanying Martin in the chorus with drinks in the air. This trend particularly carried into offerings such as the slow but effective track ‘Addicted’ and bubblegum dream ‘Mixed Signals’. The audience could be seen growing in confidence throughout the set, featuring the friendliest mosh pits ever witnessed, fans on shoulders and even the bar staff joining into the beat. The show remained a safe space, with the Liverpool natives checking that all of the members of the crowd were okay after a slight interval of a light circle pit during the set, which was a lovely sentiment. The acoustics of the venue did particularly shine a spotlight on Martin’s vocals, which blended effortlessly with the band’s skilful playing. As the set drew to a close, the only question left to ask was how quickly could their headline Autumn tour come so we could relive the experience again.

Not many bands can actively get away with the 13-year-old tiny t-shirt vibe, never mind a 90s style bucket hat or a visor, and still be taken seriously for their music. However, Swim Deep have long proved themselves to be advocates of the indie dream scene, and rocked up to the Albert Hall as their most authentic selves. The return of Swim Deep was cemented by lead vocalist Austin Williams, who entered while shaking a tambourine and welcoming the audience with a courtly “hello ladies and gentlemen”. The elephant in the room was quickly addressed by Williams during the set,as he acknowledged that they had indeed “been away for a while,” but they were “back because [they] wanted to”, and reeling off easy hits such as ‘Francisco’, ‘Honey’ and ‘King City’, it was almost as if they’d never been away. With the audience jumping energetically throughout and forming another friendly circle pit, it was clear they were appreciating the Birmingham-based band’s return. The inclusion of new track, ‘Sail Away’, was a heartfelt moment, as it marked Austin’s method of catharsis surrounding the passing of his grandma. The band certainly don’t appear to be fading away again too soon judging by their projected plans. If their future is anything like the drumming of their drumsticks, it can only be fluorescent, constant and hard-hitting.

Before long, it was time for recently-relocated Australian-New Zealander musician Jordan Rakei to take on the O2 Ritz, as the night was almost drawing to a close. His set acted as a focus on the changing ways in which we perceive a musician’s skill. From the get-go, Rakei displayed his looping prowess, recording a clap on the spot and integrating it into his first track. Creating calming melodies through a blend of electronic and acoustic musical instruments, it was an instantly pleasurable listening experience. The audience could immediately be seen singing along to his recent releases, set to be featured on his new album, Origin, such as ‘Say Something’ and ‘Wild Fire’, providing plenty of evidence to prove that his loyal fanbase is continuing to keep up-to-date with him. He also included past favourites ‘Nerve’ and ‘Eye To Eye’ to ensure he covered all bases.  Rakei is an artist who may not be able to excessively move around the stage, but who doesn’t need to – he paints a picture with his lyrics. The opening to ‘Eye To Eye’ is particularly cinematic, as his honeyed voice sings “it’s the birth of a star, earlier than sunset / it’s the galaxy’s water, flowing like a river bed.” The emotion in his voice is what carries throughout the set, particularly when he sings the raw lyrics in ‘Nerve’, “got no reason to love when I don’t love myself”, with only keys to accompany him. His ability to connect to an audience, and particularly with the younger generation, is what will take him far. His new album is set to be released on 14th June and his tour later this year will be widely anticipated for sure.

Crystal Fighters stormed in from the beginning of their set. The electro-folk band introduced themselves with an upbeat melody, their traditional Basque instruments thumping and lights flashing on their white stage costumes, which fluttered and shook as they danced to the beat. Judging by their wowed responses, many of the crowd had never seen anything like this exciting spectacle before. The whole set was reminiscent of a beach party, as a palm tree decorated the stage and the cover of their latest album release, Gaia & Friends, was in full view as the tribal backdrop of their performance.  The dancing of the two female vocalists, in particular, was hypnotic in combination with the dreamy music. During ‘Follow’, all the vocalists encouraged the audience to clap along, and successfully joined them in with their ‘call-and-response’ interaction within the song. Rattling off tracks such as ‘Boomin’ In Your Jeep’ and ‘Wild Ones’, it was a non-stop dance party. The infectious high-powered nature of their performance continues to set them apart from others, as they bring their own approach to what really makes a live performance. The organisers of Dot To Dot couldn’t have chosen a more quintessential festival band to end the successful day in Manchester’s Albert Hall.

Overall, it was an enjoyable day for all, and certainly delivered on exhibiting some of the latest and greatest that the current scene has to offer. The value for money is a factor which is definitely not to be overlooked either – there aren’t many festivals where you can pay around £14 to see at least 5 talented bands in their own right. The proof really lies in the numbers, working out around a measly £2.80 per band, and the opportunity to see one of your favourite bands for cheaper than a cup of coffee really shouldn’t be missed. Our only gripe is that there weren’t many bands to be seen before 5pm. Moreover, contrary to Clash previously stating that the venues were “within yards of one another”, this isn’t entirely true – they were fairly spread out and do require some quick movements across the city. However, this is naturally to be expected when organisers are showcasing so much talent – swings and roundabouts do come to mind. Moreover, it’s worth keeping in mind the fact that you can forgo the muddy tents and dire welly-exclusive venues at Dot To Dot, in case you needed one more reason why this growing urban festival ought to be making it onto your bucket list for next year. We’re sure we’ll see you there next time.