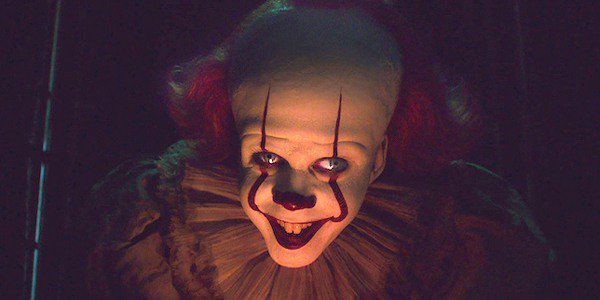 The sequel to 2017’s IT is not as effective as it’s predecessor. While it’s a good film by most measurements, it’s problems were about as obvious as…well, a killer clown.

The film continues the story of the Loser’s Club – Beverly, Bill, Ben, Mike, Eddie, Richie and Stanley – in their fight against IT, a shape-shifting human eating monster, that often takes the form of a sadistic clown called Pennywise. Having initially defeated the monster in the first film, the now adult  protagonists return to their hometown in Maine to finish what they started twenty-seven years prior.

Much has been made of the film’s portrayal of it’s gay characters. In fact, the opening scene sees a gay couple being assaulted by a gang of teenagers. I’ve seen a lot of criticism of this, but I personally don’t see it as particularly vindictive. Horror movies are generally equal opportunity offenders when it comes to who they kill off, so I didn’t personally see this scene as distasteful. In fact, without giving too much away, I think this film has a lot of gay sub-text that would make for a interesting article.

I mentioned this film has a few problems, so I’ll address them before moving onto the good stuff.

There are a few tonal problems in the film, as it fluctuates between comedy and grotesque horror. There was probably only one or two times where I felt it ruined a scene, but it’s still distracting nonetheless.

Portions of the film feel like a pile-on. The film is throwing so much at the audience, and when it’s in the form of jump scares, it gets tiring really quickly.

Did the jump scares make me jump? Well…yeah, but it’s not much of an achievement surely? I knew they were coming, and after a while, it felt a little redundant.

Without spoiling anything for those who haven’t seen the film, the ending felt kind of lame. It seemed the film was acknowledging this, as they constantly made jokes at the expense of Bill (James McAvoy), who’s a writer and an obvious Stephen King stand-in. Practically every character he meets remarks that the endings to his novels suck – a humourous if not obvious nod to how fans respond to King’s endings.

But the film had plenty to praise, and I still think it’s worth a watch – if you’re a Stephen King fan or a fan of horror movies in general.

The film is very atmospheric, and continues the unsettling tone established in the first film. Everything about the town of Derry, Maine is off-kilter. The townspeople are probably more gruesome than Pennywise, and this raises the suspense – the audience is left feeling uncertain about which characters are human.

The casting is perfect, and every member of the Loser’s Club is suited to their role. Bill Skarsgård is pitch-perfect as Pennywise, and brings a creepy child-like quality to the character. This is particularly effective in scenes where Pennywise needs to entice a child victim – one such scene involving a young girl is especially unnerving.

Overall, I’m glad I went to see ‘IT Chapter Two’. I would recommend this film, but with a couple words of caution –