You are here: Home / Culture / Manchester / Music / Neighbourhood Festival 2019: The 5 Unmissable Acts You Need To See 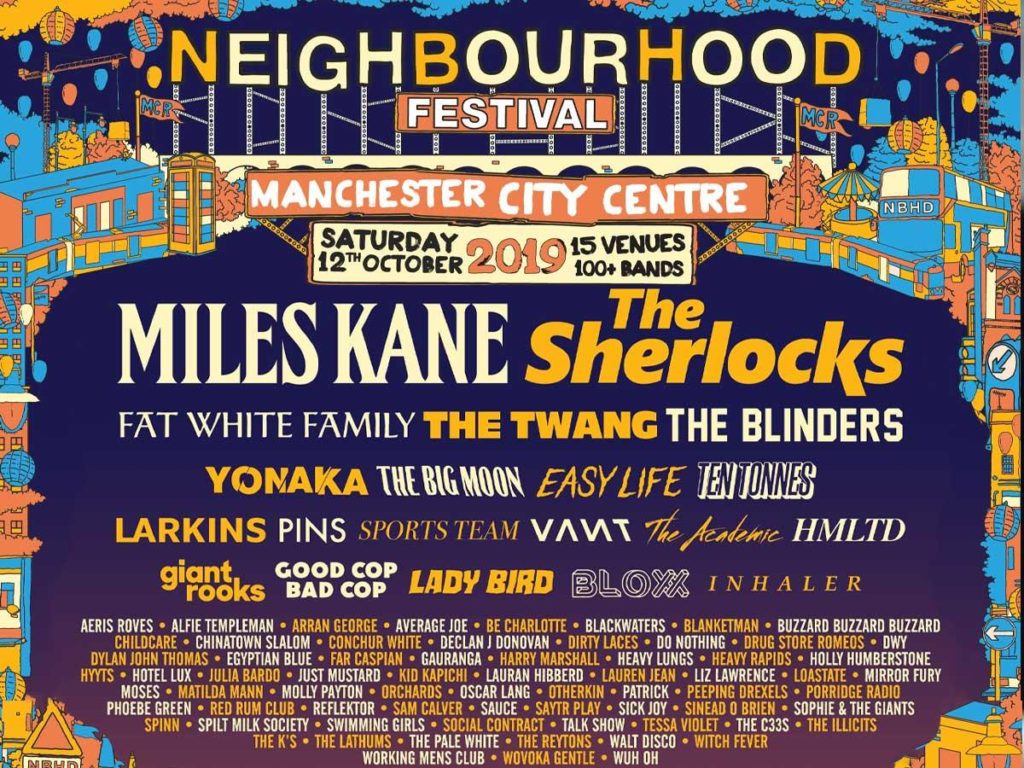 Along with the emergence of darker nights and Starbucks’ infamous Pumpkin Spice Lattes arrives the annual Neighbourhood Festival on the 12th of October. Last year the festival pulled huge crowds in with stellar headliners ‘Everything Everything’ and ‘Sundara Karma’. This year offers to be no different, boasting over 15 venues and more than a hundred bands. All you need is a single wristband to attend Manchester’s largest metropolitan festival. Without further ado, here are the five bands you need to see.

‘Yonaka’ is a band which have created a name for themselves due to their willpower and ambition. Never to shy away from a challenge, their debut album tackled topics such as mental health with poise and maturity. More recently during their latest Spotify singles session, they took on Taylor Swift’s hit ‘You Need To Calm Down’ and earned praise from Swift herself proclaiming she ‘loved it’. With no shortage of riffs and catchy hooks, this quartet from Brighton is going places. From their debut single ‘Ignorance’ to ‘Punchbag’, attitude by the bucketload is always guaranteed particularly by lead singer Theresa Jarvis. Whether or not you are already familiar with them, after you’ve seen them live you’ll certainly remember them.

Bestowing a claim that this band is our generation’s answer to punk powerhouse ‘The Clash’ carries a great deal of weight. This four-piece are bringing back old fashioned rock and roll with a crash. From their aptly titled track ‘Let The Good Times Roll’, what better band could perform at a festival. Aside from their tracks about having a ball, they’re also not afraid to give their two-pence about politics especially in the socially aware track ‘People Street’. 2019 has already been an exceptional year for the band, and fans of ‘The Blinders’ and ‘The Libertines’ certainly wouldn’t want to miss them.

A rising star who owes more to his own hard graft than being George Ezra’s brother. ‘Ten Tonnes’ aka Ethan Barnett has gained critical acclaim for his feel-good catchy hits. From touring with Rat Boy to Tom Grennan, he has gained experience beyond his 22 years. His knack for taking relatable themes such as love in ‘Lucy’ or ‘Love Me To Death’, keeping them fresh and without being overly generic is a true testament to his talent. You can’t help but sing and dance along to the breezy strumming guitar and his honey sweet vocals. If you make sure to see his set at Neighbourhood, you’ll quickly realise the ‘Y.M.C.A’ is out and the ‘G.I.V.E’ is in, and just as iconic.

A band which even has a song dedicated to Wetherspoons, the obvious pillar of British society deserves a listen- and the interesting lyrics such as “Your eyes remind me of a pitcher of Woo-Woo/ You’ll do”, who said modern romance was dead? Furthermore, they’ve even got teenage angst covered with ‘Leave Me Alone’, leaving you with a track for every level of pent up emotion. Straight talking and gritty tracks reminiscent of ‘Cabbage’ and ‘Sports Team’ but with a heavier hand, the punk scene is in safe hands right now. You’ll quickly realise why they’re ‘Slaves’ new favourite band and soon to be yours too.

From Glastonbury to TRNSMT, next Miles Kane will be making his mark on this year’s Neighbourhood Festival. Also known for performing with Alex Turner of ‘Arctic Monkeys’ in a side-project ‘The Last Shadow Puppets’, his name undoubtedly precedes him. Apart from being able to pull off anything (even an all-white suit) his voice and commitment to creating a hit puts him in a league of his own. His debut album ‘Colour of The Trap’ contained indie-rock hits such as ‘Rearrange’ and ‘Come Closer’. Now he’s back with his latest track ‘Blame It On Summertime’, just over a year after his ‘Coup de Grace’ era. It’s a summer fueled hit and seeing him perform it live will surely help extend the sunny season into October.

Neighbourhood Festival is notorious for bringing together some of the newest and greatest stars. From unapologetic punk rockers, Lady Bird to Miles Kane, an experienced artist who has more than earned his stripes on the festival circuit – this event has it all. Act fast to avoid a guaranteed disappointment, purchase your tickets now.